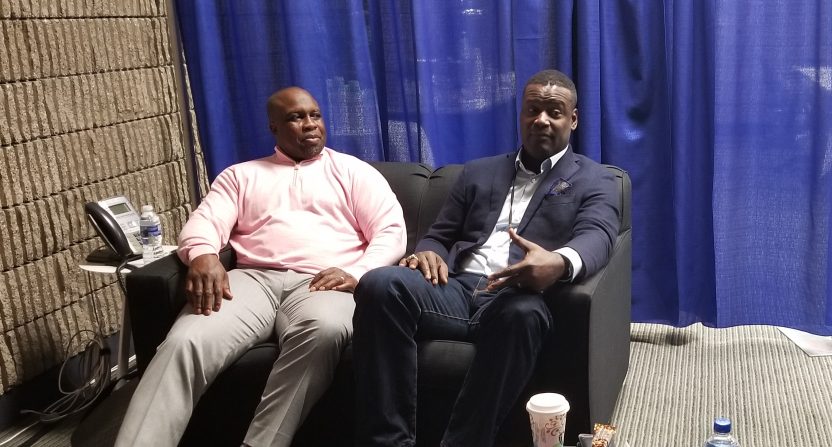 NFL legends are just like us! They laugh, they cry, and they even group chat! Together, in fact.

That’s how many of the key members of the 1999 St. Louis Rams stay in touch.

“You might wake up in the morning and have 17 or 18 messages from all the guys going back and forth on something that happened that day,” recalled Kurt Warner, the Hall of Fame quarterback who led the “Greatest Show on Turf.”

That chat is particularly active this week, because the Rams are back in the Super Bowl in search of their first Vince Lombardi Trophy since that 1999 team beat the Tennessee Titans in a thriller.

Just like in 1999, the game is in Atlanta. Just like in 1999, the threat of inclement weather conditions has hovered over Super Bowl week. And just like in 2001, when that Rams team last appeared in a Super Bowl, it’s the Patriots and the Rams in the big game. The contemporary Rams — now based in Los Angeles, of course — are also wearing their throwback uniforms, and several of the best players from that era’s St. Louis-based team will be working hard on game day.

Warner, London Fletcher and Kevin Carter are all covering the Super Bowl as analysts — Warner for NFL Network, Fletcher and Carter for CBS Sports — and they’re all feeling nostalgic this week in Georgia’s capital.

“You can’t help but go back to the memories that we had during that week,” Fletcher said. “Getting into town and the ice storm — thankfully it didn’t happen again — and the practices. Just the memories. Mike [Jones] making that tackle and the confetti and our teammates running on the field. It’s like I’m there all over again.”

“Every Super Bowl you go to brings back great memories because you see highlights of your Super Bowls and you’re reminded of that,” added Warner. “Of course this year, being in Atlanta, and it’s the Patriots and the Rams, so there’s a lot of talk about both my first Super Bowl as well as the second one.”

Fletcher also notes that both the 1999 Rams and the 2018 Rams possess(ed) world-famous offenses and less-heralded defenses. But he and Carter were quick to point that that their unit was underrated, and they’re right.

“Their defense isn’t like ours,” Fletcher said of the 2018 team. “There was a misconception that we weren’t a good defense, and that bothered us.”

“Definitely an underrated defense the first time around,” Carter said. “Some of the games we won, we took ’em on defense. We were good at taking the ball away and we were good at giving our offense opportunities.”

That Rams D was actually the top-ranked unit in the league against the run, they created more takeaways than all but five other defenses, and — as Fletcher was eager to point out — they were the top-ranked scoring defense in the NFL entering the final week of the regular season.

Fletcher, Carter and Warner are deeply proud of what that team accomplished, and they’re also happy that they’ve remained in touch. They estimate that about 90 percent of the ’99 roster returned for a 15th anniversary celebration a few years ago, and they note that their respective careers in television have helped foster an ongoing camaraderie.

“Broadcasting has brought me back to be able to engage and see those guys at games, events, the Super Bowl,” said Fletcher, who contributes to That Other Pregame Show on CBS Sports Network. “It really enhances the memories that we made.”

Carter, who served on CBS’ Super Bowl live program this week, points out that “when you leave the game, the music stops. All you’re left with is the memories of the relationships that you had in the locker room.” But he says life in broadcasting has enabled him to maintain those relationships in a team-like atmosphere.

“This whole week,” he said of his ability to reconnect with former teammates in Atlanta, “I had a permanent smile on my face.”

Not only are he and Fletcher teammates again as CBS Sports colleagues, but they’re joined by CBS game analyst and fellow ’99 Rams alumnus Trent Green. And Carter says the bond between the three is critical when any combination of the trio is on set together.

“They can pick up on things because we know each other,” he said.

It helps that they continue to rib each other both on air and online, where their group chat rages on.

“It can get a little annoying,” said a smiling Fletcher of the constant messages. “They like to text.”

“That guy” who sends too many messages? Fletcher and Carter agree it’s former defensive back Dre’ Bly, who was a rookie sensation with that ’99 squad.

But it’s all in good fun, and the crew remains close — thanks partly to the internet and partly to an industry that continues hire and champion former NFL stars.

“It was a great transition for me once I retired from the NFL,” Fletcher said. “It gave me a new profession, and it was something that allowed me to still be around the game and talk about the game, share my knowledge of the game. I’m thankful that CBS Sports brought me into their family.”