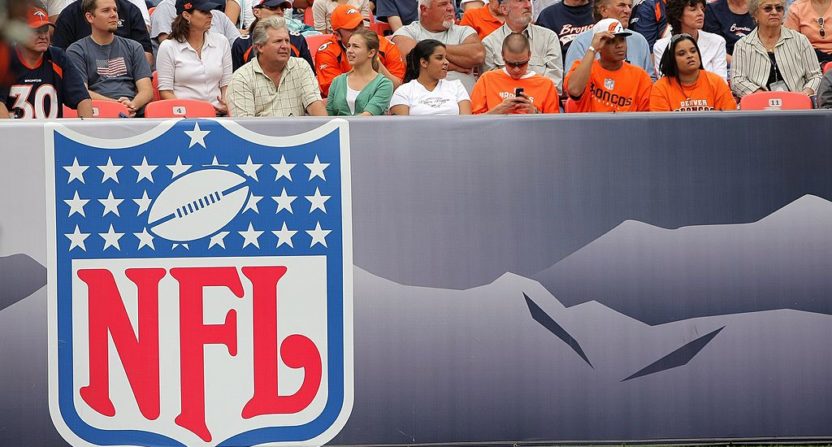 With NFL ratings failing to rebound this season after a startling drop last year, it is becoming more and more clear that the league faces a real problem, not merely a blip.

As America hysterically debates the causes of the NFL’s ratings woes, television executives have their own explanation, according to Sports Business Journal: over-saturation of football.

And so, per SBJ, television executives have a couple potential solutions to this problem. They have reportedly lobbied the NFL to cut back its Thursday Night Football package from 18 games back to eight, as well as to slide the league’s London games back to 1 p.m. ET (6 p.m. in London).

It’s easy to understand why the NFL has spread out its games so widely. Football is still incredibly popular, with massive amounts of interest in even the least appealing matchups, so the league wants to get eyeballs on as many games as possible. As long as TV partners have offered to air games at non-traditional times, the NFL has given the green light. But at the same time, much of the NFL’s magic is the communal experience of watching football all day Sunday, parked in front of the television from noon to midnight. The more the league disperses those games, the more it loses the ritual at the center of its myth.

Several executives summed up the over-saturation problem to SBJ:

“It’s not just an NFL issue or a college issue; it’s a football issue,” said Mike Mulvihill, executive vice president of research, league operations and strategy at Fox Sports. “The rise in football availability is pretty dramatic. This is what drives fragmentation in every area of television. … You can argue whether there’s greater or lesser interest in the game of football than there was 10 years ago. But clearly whatever that interest is, it’s being spread out over quite a few more windows than it was 10 years ago.”

“I do believe that there is a lot of football on and by the time you get to Sunday, there could be a fatigue,” said Mark Lazarus, chairman of NBC Broadcasting and Sports. “Much of the loss of viewers is coming from 18- to 34-year-olds. They more and more are getting satisfied by the alternatives of highlights and scores that are available during the game. That continues to train young viewers to follow our sports, not watch our sports. That is concerning for all sports television.”

As the NFL’s ratings issues become more persistent and the league’s PR headache accelerates, the league will presumably open up to changes. And if the TV networks are serious about a condensed schedule, maybe they can talk (and spend) their way into one.