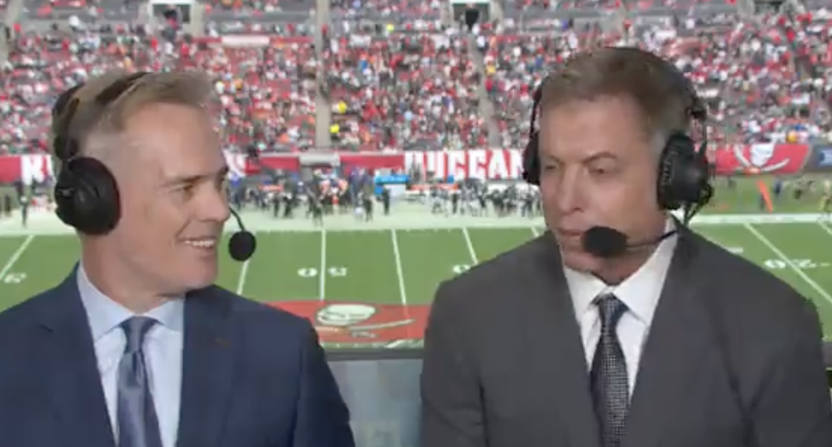 The NFL’s Super Wild Card Weekend created a lot of interesting quirks in the playoff schedule thanks to six games scheduled across three days on almost a dozen networks and streaming services. Perhaps because of that, Joe Buck and Troy Aikman, Fox’s top duo, found themselves covering the Philadelphia Eagles vs. Tampa Bay Buccaneers instead of the game between the San Francisco 49ers and Dallas Cowboys, which would have been the expected assignment but was being broadcast by CBS.

During the broadcast of what ended up being a pretty uncompetitive game, Buck started discussing the impending matchup between the Cowboys and Niners when Aikman tossed some comments out there that seemed to indicate that he was a bit miffed that he wasn’t able to call it.

Troy speaking for everyone still watching this one ?? pic.twitter.com/bObFae5CaZ

“It’s gonna be a great game. I mean, a really good game,” said Aikman. “There’s a lot of people that’d like to be calling that game.”

Aikman was more right than he knew as the Dallas-San Francisco showdown was the most-watched Wild Card game in seven years.

Everyone had a good chuckle at Troy’s quip but it did feel like the kind of moment you don’t get very often, where a broadcaster seemingly takes a shot at the NFL and its TV partners during an NFL broadcast.

Not so, says Aikman. The former Cowboys quarterback stopped by The Ryen Russillo Podcast on Monday and he deflected the notion that he was upset or trying to air any grievances.

Troy Aikman wasn’t upset over not calling the 49ers-Cowboys playing game, but confused that it was assigned to CBS: pic.twitter.com/iItTYXhtfb

“There were some that were trying to say I’d rather be doing the game than the one I was doing,” said Aikman. “That wasn’t the point at all. I’m thrilled to be doing any game. But Joe said, ‘Hey, that should be a great game.’ Yeah, an amazing game. I would’ve loved to call that game. There’s no question, it’s a huge ballgame. But that didn’t mean I would love to be calling it over the game I was calling or that I was upset that I wasn’t calling the game.

“I was confused, quite honestly, when it first came out. I thought that there was a chance that we would be calling that game. And that if we weren’t calling that game, then that meant that it was either going to be on ESPN or that it would be on NBC. Which is what happens, that happens a lot…but I was confused when an NFC matchup went to the network that covers the AFC with CBS. So I didn’t understand that, I still don’t understand.”

We’ll have to take Aikman at his word that he wasn’t bothered. However, he also immediately followed up saying that it didn’t bother him by then explaining why it bothered him, so there’s that too. And Troy can say what he wants after the fact, but the way in which he says “there’s a lot of people that’d like to be calling that game” followed by Buck’s knowing laugh makes it hard to believe that there wasn’t some kind of intent there, even if it was just to be sarcastic.

Ultimately, Aikman blamed “the irresponsibility of media” and everyone’s favorite boogeyman, “social media,” over any drama created by his remarks and the way they were interpreted.

[The Ryen Russillo Podcast, via The PodCass]