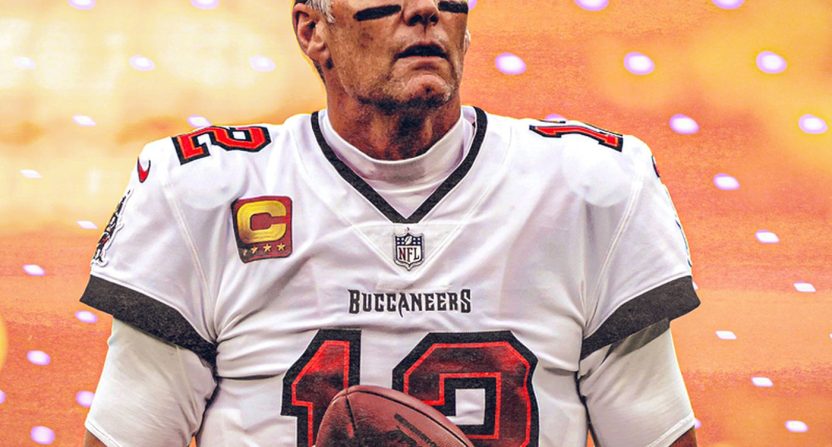 In one month, Tom Brady and the Tampa Bay Buccaneers will begin their quest for another Super Bowl championship.

Brady, of course, announced his retirement soon after the Bucs were eliminated by the Los Angeles Rams in the NFC Divisional Round. 40 days later, however, TB12 decided to come out of retirement and suit up for a 23rd season.

Brady’s decision changed everything for Tampa Bay. GM Jason Licht worked quickly to retain several stalwarts such as Chris Godwin, Leonard Fournette, Ryan Jensen (though he could miss the entire season with a knee injury), and Carlton Davis.

Football fans who want to get into betting can take advantage of several special offers, including a $1,000 risk-free BetMGM Bonus Code. There are many benefits to signing up with BetMGM, including a loyalty and rewards program for customers, sportsbook contests, and much more.

The oddsmakers shifted dramatically following Brady’s un-retirement announcement, too. The Bucs are among the prime favorites to win the Super Bowl at every major sportsbook. They have the second-best odds at BetMGM (+750, only the Buffalo Bills are higher at +650) and DraftKings (+700, Buffalo is +600).

Brady and Kansas City Chiefs quarterback Patrick Mahomes share the second-best MVP odds on BetMGM at (+800), behind only Josh Allen of the Buffalo Bills (+700). Allen is also the +700 favorite at DraftKings, and Brady is right behind him at +800.

The Buccaneers are the giant favorites to win the NFC South, with only the New Orleans Saints serving as a potential threat to the crown.

The Atlanta Falcons are in rebuilding mode, and the Carolina Panthers are relying on former first overall pick Baker Mayfield to save the day. The Saints can’t be entirely ruled out given their dominance over Brady (4-1 since he joined the Bucs), and the healthy Jameis Winston-Michael Thomas duo could make a difference.

The Bucs are the overwhelming favorites to win the NFC South (-270 at BetMGM, Saints are +350), so this isn’t the best value pick. Tampa should win the division, but the payout isn’t going to be as great here.

As previously noted, Brady is up there with Allen and Mahomes for the betting favorites to win the MVP award. But a better value pick would be to place a wager on Brady winning the Offensive Player of the Year honors.

The MVP award has gone to a quarterback in all but one year since 2007 (Adrian Peterson in 2012). However, four of the last five OPOY winners have been non-quarterbacks, including the last three (Michael Thomas in 2019, Derrick Henry in 2020 and Cooper Kupp in 2021).

Brady is +5000 for OPOY at both DraftKings and BetMGM. If he has a season very similar to 2021 (5,316 passing yards and 43 touchdowns, both led the league) Brady will be in contention for the MVP and OPOY honors.

He only didn’t win MVP last year because Aaron Rodgers just so happened to have one of the greatest seasons ever. Without Davante Adams now, however, Rodgers’ production stands to decline.

Simply put, betting on Brady to win OPOY honors is a much greater value pick than MVP honors.

Chances are if he wins the MVP anyway, he’d win the Offensive Player of the Year as well.

The Buccaneers have one of the NFL’s toughest schedules for 2022, and there are several roster flaws that cannot be overlooked.

Not having Rob Gronkowski as a security blanket anymore will hurt as well. But newcomers Julio Jones and Russell Gage should help make up for Gronk’s departure, and there still aren’t many (if any) better receiving duos than Mike Evans and Chris Godwin.

The Bucs do have holes in their secondary, but their elite run defense and deep set of pass-rushers will make up for it. This is still one of the NFL’s deepest rosters, so the Buccaneers should very much be in contention for football’s best record next season.

Tampa Bay simply won’t repeat last season’s total of 13 wins (they were undefeated in one-score games). But Brady and the high-powered offense will do just enough to lead Tampa to 11 wins and another division title.