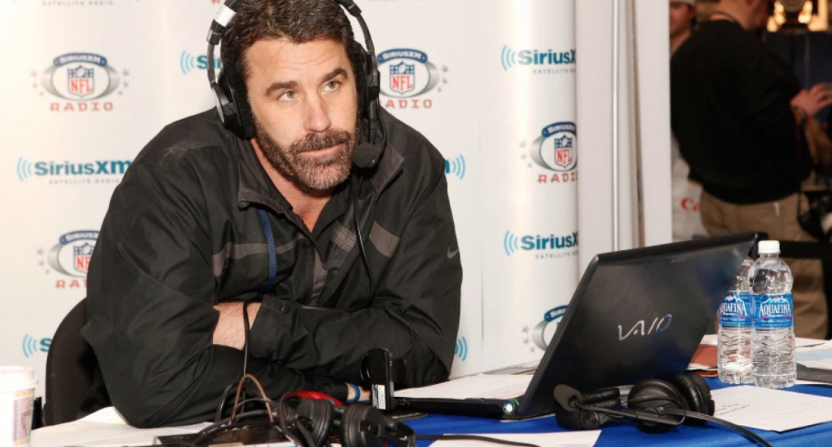 Bringing a new definition to the term “color commentator,” San Francisco 49ers radio analyst Tim Ryan stepped in it this week by saying that Baltimore Ravens quarterback Lamar Jackson’s dark skin gave him an advantage with a dark football and uniform when concealing the ball on handoff fakes.

“He’s really good at that fake, Lamar Jackson,” Ryan said on-air during KNBR’s “Murph & Mac” show Monday. “But when you consider his dark skin color with a dark football with a dark uniform, you could not see that thing.”

Following the remarks, the 49ers suspended Ryan from the broadcast of Sunday’s game versus the New Orleans Saints. Dennis Brown, a defensive lineman for the team from 1990 through 1996, will replace Ryan alongside play-by-play announcer Greg Papa. Brown has been a pre- and post-game analyst on KNBR’s 49ers radio broadcasts for the past two seasons.

Snippet of Tim Ryan’s comments RE: Lamar Jackson’s “dark skin with a dark football with a dark uniform… you could not see that thing” via KNBR. He has since been suspended by the team pic.twitter.com/vpRI3veoXK

On Thursday, Ryan, who’s been part of the 49ers’ radio broadcasts since 2014, apologized to 49ers players and others in the organization at the team hotel in Bradenton, Florida. (The 49ers are staying in Florida for the week in preparation for Sunday’s game in New Orleans.) As cornerback Richard Sherman explained to reporters, the effort was appreciated.

“I know Tim personally and I have listened to the dialogue and saw it written and honestly I wasn’t as outraged as everybody else,” Sherman said, via ESPN’s Nick Wagoner.

“I understand how it can be taken under a certain context and be offensive to some, but if you’re saying ‘Hey, this is a brown ball, they’re wearing dark colors and he has a brown arm, honestly sometimes we were having trouble seeing it on film,” he continued. “So it was technically a valid point. […] But you can always phrase things better, you can always phrase things and not say ‘his black skin.’ ”

Sherman went on to say that he’s had a good relationship with Ryan since joining the team in 2018.

“He’s never been anything but a great guy and a professional and a guy who takes his job seriously,” said Sherman. “So it’s unfortunate that that’s what it came to.”

Defensive lineman Dee Ford also spoke up in favor of Ryan after he apologized to the team.

“He walked up to me earlier and before he even said anything, I told him ‘I got your back,'” said Ford. “I already knew the story. The words kind of got taken out of context. Of course, I think he knows now that he could have used a better judgment with his words, but we’ve got his back. I knew what he was trying to say.”

According to The Athletic’s Matt Barrows, Ryan regularly attends practices and is often on the field with players and coaches. That’s resulted in developing a strong relationship with defensive coordinator Robert Saleh, who also defended Ryan on Thursday.

“I’ve always, as a human being, tried to judge people on how I interact with them,” said Saleh. “And I love the man. He’s a very genuine human being. And I know he knows he made a mistake. And he’s just trying to move on as quickly as possible.”