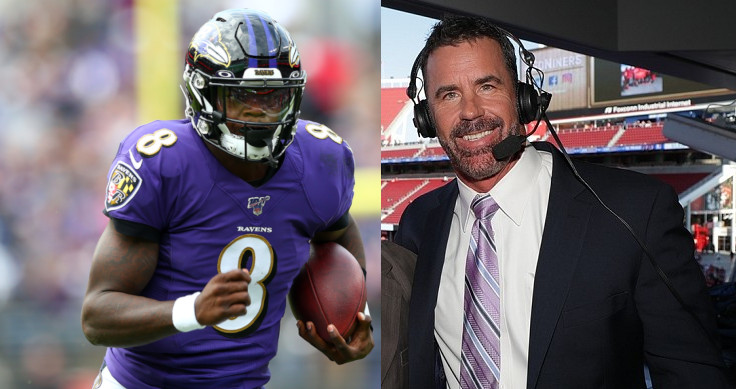 Snippet of Tim Ryan’s comments RE: Lamar Jackson’s “dark skin with a dark football with a dark uniform… you could not see that thing” via KNBR. He has since been suspended by the team pic.twitter.com/vpRI3veoXK

“He’s really good at that fake, Lamar Jackson, but when you consider his dark skin color with a dark football with a dark uniform, you could not see that thing. I mean you literally could not see when he was in and out of the mesh point and if you’re a half step slow on him in terms of your vision forget about it, he’s out of the gate.”

And here’s coverage of the fallout from The Chronicle, which includes the 49ers suspending Ryan for this week’s game against the Saints:

“We hold Tim to a high standard as a representative of our organization and he must be more thoughtful with his words. Tim has expressed remorse in a public statement and has also done so with us privately,” 49ers officials said. “We know Tim as a man of high integrity and are confident he will grow and learn from this experience.”

In a statement to The Chronicle, Ryan said, “I regret my choice of words in trying to describe the conditions of the game. Lamar Jackson is an MVP-caliber player and I respect him greatly. I want to sincerely apologize to him and anyone else I offended.”

“I know Tim and he is not of a maleficent mind relative to these types of issues — but of course that does not mean that he gets or should get a ‘pass’ regarding to his comments on Lamar Jackson and assigning ANY dimension of Lamar’s undeniable brilliance at QB to his skin color — a raw and sensitive assessment and assertion not only because it is profoundly obtuse and ignorant on its face and carries implications that I’m certain were not intended, but because skin color has been such a factor in rationalizing denial of Black athletes’ opportunities to play the QB position over most of the NFL’s 100 years of existence,” Edwards wrote in an email to The Chronicle before the 49ers took action to suspend Ryan.

Ryan played defensive tackle in the NFL from 1990-1993 with the Chicago Bears. He played at USC before that. He worked on NFL on Fox broadcasts from 2002-2013 before taking over as the 49ers’ radio analyst.

This feels like a controversy that easily could have been avoided. People have claimed that dark uniforms provide an advantage on fakes before (although there doesn’t seem to be much empirical evidence supporting that), and if Ryan had just stuck to that line, this wouldn’t have been a story. But he should have known that bringing race and skin color into it wouldn’t go over well, especially with the implication that Jackson has some sort of unfair advantage as a NFL quarterback because of his race. Jackson’s 32nd overall draft selection and all the talk about moving him to wide receiver, disputed or not, plus the overall history of discussion about black quarterbacks in the NFL, certainly suggests that he wasn’t particularly advantaged by his skin color.

It’s also notable what Edwards goes on to say to The Chronicle; if quarterbacks having dark hands really was an advantage, teams probably would have addressed it by now with means other than selecting dark-skinned quarterbacks, such as selecting quarterbacks who can play well in gloves. There’s no real evidence to suggest that a quarterback’s skin color provides any advantage. And just because Ryan had challenges seeing whether handoffs were fake or not from the broadcast booth doesn’t mean that the much-closer players on the field did. So this was a controversial statement lobbed out there without much to support it, and it produced quite the result.