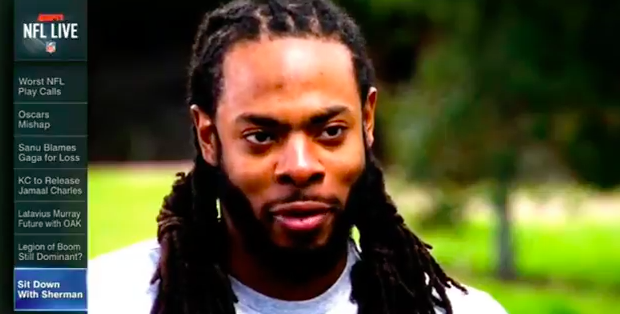 Richard Sherman shot to prominence as one of the best cornerbacks in the NFL and ranting at Michael Crabtree after the 2014 NFC Championship Game. Sherman became a media darling and national celebrity overnight for calling Crabtree a “sorry receiver.”

But now Sherman is going to war with the same media that put him on such a high pedestal and he’s doing so in a way which belies facts and befuddles those who cover him on a regular basis.

Sherman has a history of being touchy with the media. In December 2015, he was upset that media members were picking against the Seahawks and called for their jobs. In December 2016, Sherman was involved in a confrontation with Seattle radio host Jim Moore where he threatened Moore’s career and said he could get his press credential taken away from him. That incident came after Moore asked Sherman about getting into it with Seahawks offensive coordinator Darrell Bevell. The Seattle Times even produced audio of Sherman saying he’d ruin Moore’s career and take his media pass away.

Sherman apologized for the incident and even tried to make light of the credential-based threat with these tweets.

So how then does it make sense that Richard Sherman can go on ESPN in February and say “nobody ever knew what I said.” Because that’s exactly what happened in an interview on NFL Live with Cari Champion.

Sherman: No because nobody ever knew what I said. Once again ‘sources say’… who was there? Did anybody see it? You know, who was there, who said it?
Champion: So it was not correct?
Sherman: Nobody knows. Nobody knows what was correct, all you hear is he said, she said.
Champion: I’m asking you was it incorrect?
Sherman: It was incorrect how they portrayed it, yes. It gets to the point where nobody needs the truth anymore…

There’s audio of this! You apologized for this! You sent out an ironically long hashtag joking about you threatening credentials of a member of the press over this!

Sherman’s apperance didn’t go unnoticed as Matt Calkins of the Seattle Times called out Sherman for his bizarre behavior and attempt to rewrite history:

I’m sorry, but this is insane. This isn’t Sherman embellishing the truth or downplaying a mistake — this is Sherman questioning whether a documented event ever took place at all.

I mean … there’s audio of this thing! The “sources” Sherman questions are the iPhones that recorded it. We played the exchange on our website the day it happened…

What makes all of this even crazier is that Sherman took to Twitter later that day and expressed regret over making it “personal” with Moore. He could have repeated that sentiment on ESPN — or even apologized — but instead gave this bizarre media-is-out-to-get-me response.

Sherman’s like an android whose programming prevents from him from showing a morsel of contrition. And it seems there’s no length he won’t go to protect his pride.

Perhaps this sounds like a woe-is-me media story to some. It’s not. The initial exchange with Moore may have been overblown, but what Sherman is doing now is dumbfounding.

What is going on with Sherman? It’s one thing to have a contentious relationship with the media, but it’s quite another to try to control how they can do their jobs or try to have a say in who should get access or even have a job. Sherman crossed the line once already with his initial behavior, but this condescending alternative facts stance is just absurd. You just don’t get to go on national television and bemoan living in a post-truth world when you’re out here peddling your own fake news.

How can he go on ESPN and say that he is incorrectly portrayed and paint himself as the victim of media inaccuracies when there’s audio of his exact words during the exact exchange? It makes no sense.

Let’s see, questioning the truth and accusing reporters of fake news in the face of obvious evidence and facts… sounds like somebody else I know.