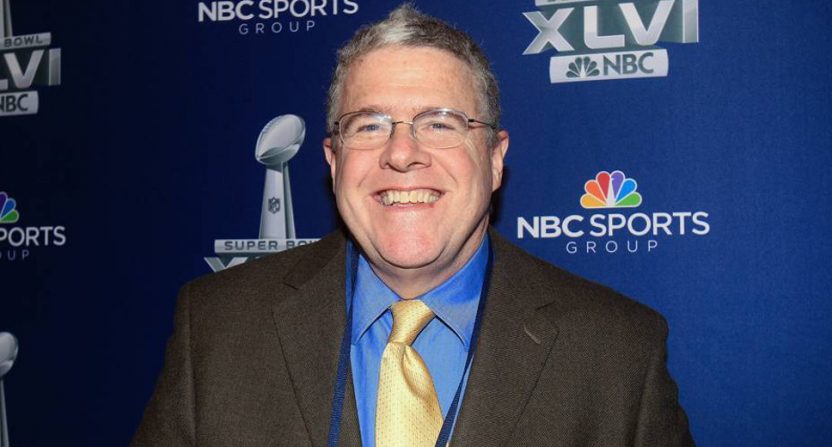 A whole lot of football pundits have decided that new New England Patriots’ receiver Josh Gordon (acquired from the Cleveland Browns along with a seventh-round pick for a fifth-round pick after the Browns announced plans to cut him if they couldn’t trade him) is someone to pick on, and the latest to do so is NBC’s Peter King. What makes King’s take stand out above many, though, is how he argued (on Boston sports radio station WEEI’s Dale & Keefe)  that Gordon “is not worthy of this franchise”:

Peter King on @DaleKeefeWEEI: "The Patriots are a proud franchise, and I realize what I am saying is a little bit of idealistic crapola, but the Patriots should not be in business with Josh Gordon. He is not worthy of this franchise.”

Just what is so bad about Gordon? Well, the only black mark on him in terms of the legal system is how he pled guilty to a driving-while-impaired charge in September 2014 (stemming from a July 2014 incident). Beyond that, he has run afoul of the NFL’s substance abuse policy several times, earning a suspension for that in 2014, another one in 2015 (for alcohol use), a failed reinstatement attempt in January 2016, an eventual conditional reinstatement with a four-game suspension in July 2016, a trip to an in-patient rehab facility in September 2016, another failed reinstatement attempt in March 2017, and a conditional reinstatement in November 2017. Then, there’s the Browns’ decision to part ways with him after just one game this year (which didn’t cite any specifics).

But those are all collective bargaining issues, NFL policies, and team decisions, not issues with the legal system. And while the driving-while-impaired charge is serious and significant, Gordon is far from the only NFL or Patriots player to run into legal trouble. In fact, a MassLive piece in 2013 had the Patriots with 14 arrests since 2000 (below the NFL average, but still significant), and another one in 2017 breaking down NFL arrests by team had the Patriots tied for 24th since 2000, with four drug-related arrests and four assault charges. Some key Patriots who have run into legal trouble:

Oh, and there have been a whole ton of Patriots who have run into significant legal trouble after leaving the team, from Laurence Maroney (weapons and drug charges) to Chad Johnson (domestic battery and probation violations) to Reche Caldwell (gambling and drug charges) to Brandon Browner (kidnapping and attempted murder) to Kellen Winslow Jr. (multiple charges of kidnapping and rape).

Of course, the team can’t necessarily be blamed for what players do afterwards, and they’re far from the NFL leader in arrests, but the idea that Gordon is somehow “not worthy of this franchise” is a pretty hot take. The Patriots have been associated with plenty of people who have gotten into more trouble than Gordon, both before and after their associations with the team. So it feels like quite a stretch to try and elevate them above other NFL teams in terms of the character of their players, and to say that Gordon is “not worthy of this franchise.”