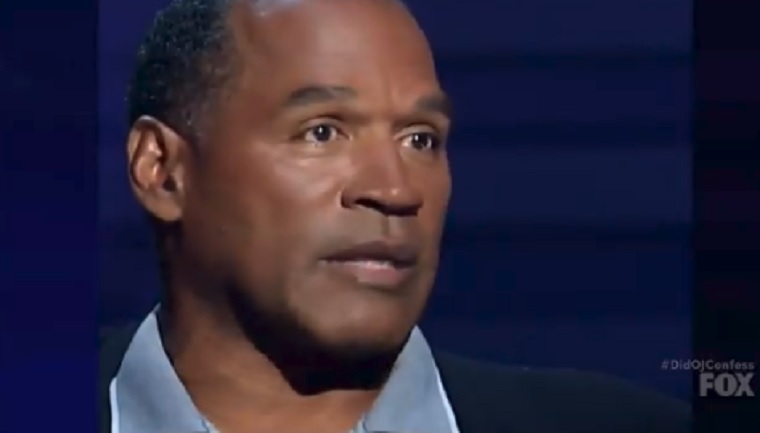 Sunday night, Fox aired its O.J. Simpson: The Lost Confession special, broadcasting a 12-year-old interview that was originally supposed to run with the release of a book titled If I Did It. The entire endeavor was a gross grab for money and ratings, exploiting the idea that Simpson was explaining how he would have carried out the murders of Nicole Brown Simpson and Ronald Goldman. But, the book and special supposed, he didn’t commit those crimes because he was acquitted.

At the time, ReganBooks (an imprint of HarperCollins that has since been shuttered) and Fox ceded to public outrage, cancelling both the book and the accompanying TV special. Good sense — and taste — appeared to have won out. (Though a version of the book was released in 2007, with the Goldman family getting rights to the book as part of their civil claim against Simpson.)

But 12 years later, with Simpson out of prison (incarcerated for armed robbery, but likely sentenced as retribution for the murders for which he was never convicted) and Fox in need of some ratings juice on a Sunday night during which many people were focused on the NCAA Tournament selection and ABC’s revival of former Fox property American Idol, the network opted to blow the dust off the O.J. Simpson interview and broadcast it in prime time.

This was very much Fox being Fox, making a decision that viewers and critics would only expect from a network that has regularly catered to the lowest common denominator with salacious programming in its thirst for ratings.

(Incidentally, the O.J. interview special aired 25 years to the day when an episode of The Simpsons aired that was originally supposed to feature Simpson in a guest appearance. That was revealed earlier in the day by Simpsons showrunner Al Jean.)

Those who did tune in for Fox’s spectacle Sunday night — and ratings show that the show didn’t draw as many viewers as Fox surely hoped — likely did so for one reason. Did O.J. Simpson actually confess to murdering Nicole Brown Simpson and Ron Goldman? Even if the interview was under the charade of being a “hypothetical” exercise?

“Taking the knife from Charlie, and to be honest, after that I don’t remember. Except I’m standing there and there’s all kind of stuff around … blood and stuff around…” *breaks into laughter* – O.J. Simpson #DidOJConfess pic.twitter.com/eZA27EERli

You’ll have to judge for yourself, but Simpson did get caught in a moment during his interview with Judith Regan where the lines were very blurry between hypothetical and real. He described being at the scene with a friend he called “Charlie,” who came with him to confront his ex-wife. (Confront over what isn’t exactly clear, unless he thought Brown was in a relationship with Goldman, whom Simpson said he didn’t recognize.) He even said “Charlie” handed him the knife that was found to be the murder weapon.

But after that, Simpson’s memory got cloudy and all he remembered was “blood and stuff around.”

After Regan asked the follow-up question which yielded the “blood and stuff” answer, Simpson appears to catch himself and laughs uncomfortably, saying “I hate to say this, but this is hypothetical.” Oh, yeah — this was supposed to be hypothetical. Right before that, what Simpson described didn’t appear to be very hypothetical, however.

Did O.J. Simpson confess there? Maybe not in so many words, especially from a legal standpoint. Christopher Darden, who was on the prosecution team in the O.J. murder trial, certainly thought so. (OK, he’s hardly an objective presence.)

Darden was part of a panel with host Soledad O’Brien that provided commentary between interview clips. Based on what Simpson said, the argument could be made that he was there, having been handed a knife, and in his words, lost time and recollection of what was happening. It sure seemed like he admitted a strong role in what happened.

But to what end does all of this actually serve? Most everyone — if not everyone, except Simpson himself in his “hypothetical” world — believes that he murdered Nicole Brown Simpson and Ron Goldman, regardless of his acquittal. He’s been convicted in the court of public opinion, stripped of all the status he valued. His celebrity is now an infamous one. Though Simpson was reportedly paid $800,000 for the “If I Did It” book, he never saw a dime of that money and wasn’t paid anything for this television special. Ultimately, maybe this serves as confirmation, a form of affirmation for the Brown and Goldman families.

“We missed a half a dozen opportunities to save her life.” #DidOJConfess pic.twitter.com/OOWqKIh40A

Fox did attempt to frame this special and the entire Simpson case as a commentary on domestic violence, so maybe some good can come from this after all. Simpson described and voiced textbook abusive behavior throughout the interview, and maybe anyone in a circumstance encountering similar behavior can heed the warnings that were put forth here. Darden and his fellow panelists pointed out numerous times that this could have been addressed and stopped numerous times. That angle may not have been pursued as it should have had this interview aired in 2006.

In a cultural climate when abusive behavior and misconduct has been brought to light and punished as never before, perhaps something can actually be accomplished here. Unfortunately, that lesson will almost certainly be lost under the salacious nature of this enterprise and the supposed headlines it intended to create by capitalizing on renewed interest in this case.