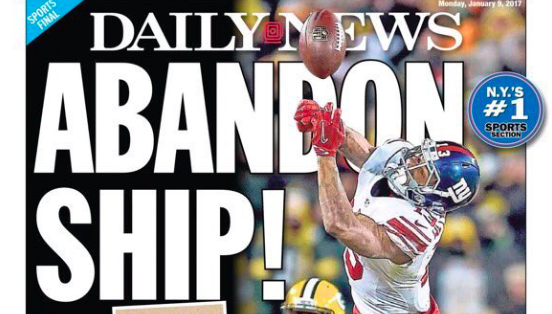 In case you haven’t heard, the New York Giants got blown out in their playoff game at the Green Bay Packers on Sunday because of a boat trip or something.

A few members of the Giants hung out in Miami on a boat after their final regular season game last week and before their playoff game against the Packers this weekend. And because they did something outside the dictated, regimented norm of NFL preparation, that is the sole thing that decided the fate of their season. Don’t believe me? Pretty much everything that happened in yesterday’s game got a boat joke attached to it.

That's three big drops for the Yacht Club: 2 by Odell, 1 for a TD, and 1 for a TD by Shepard. It's so much colder than it was in Miami!

OBJ dropped that ball like he spent an off day in Miami on a boat or something.

And finally, you just knew the morning after that the New York tabloids would be on top of these boat pun headline and pictures. It might as well have been Christmas Day for the Post and the Daily News.

Of course the Post went with the boat pic and headline for the Giants pic.twitter.com/b364DDmSOO

And of course, there was the mandatory Crying Jordan picture.

Did the Giants REALLY lose because a few of their players partied on a boat in Miami several days ago? It’s impossible to ever say something like that is a true or false statement because we’ll never know the alternative. What we do know is that any time an athlete (or group of athletes in this case) introduces any variable to the game equation whatsoever, they open themselves up to questioning and mockery of the highest order. I mean, the Dolphins live in Miami and spent the entire week there, is that the reason why they lost in Pittsburgh too? Did the Giants allow Aaron Rodgers to throw for 362 yards and 4 TDs because Odell Beckham stepped foot onto a nautical machine?

Next time, maybe the Giants can spend their Monday getting stuck in a New York traffic jam and see if that gets blamed for a loss as well.