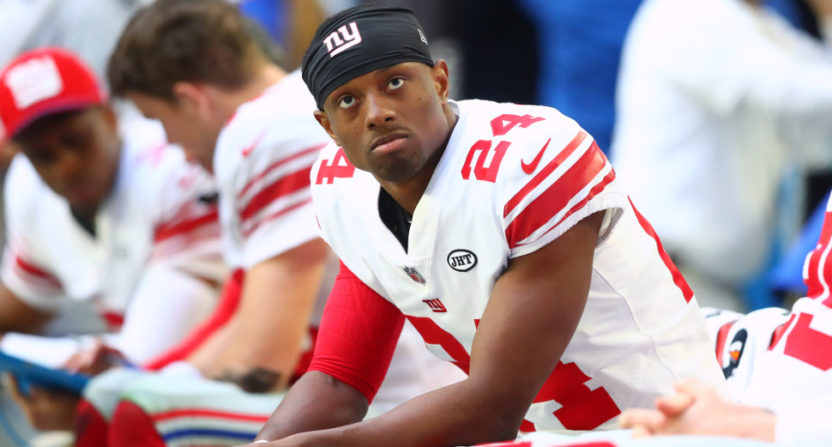 Over the last week, New York Giants’ cornerback Eli Apple saw his half-brother take his family drama to the press, didn’t play a defensive snap in the team’s loss to the Arizona Cardinals, was called a “cancer” in a radio interview by veteran teammate Landon Collins, and was even suspended Wednesday for “a pattern of behavior that is conduct detrimental to the team” after an on-field argument with coaches.

And yet, the oddest behavior in the whole situation may not have come from Apple himself, but from Pat Leonard of The New York Daily News, who decided to jump on a horse about a mile high in a patriarchal “defense” of female reporters Wednesday. Even before Apple’s suspension, Leonard went off on a rant about his comments to media:

Eli Apple has to be kidding. His first comment to media, including female reporters, minutes ago: “I gotta take a sh**!” Said it loudly. Smh #Giants https://t.co/mbU5ZgkVvh

Leonard turned that “disgusting” exchange into a story itself. And once Apple was suspended, he kept the “disgusting” comment as the lede:

The s–t has hit the fan.

The Giants swiftly suspended cornerback Eli Apple for the season’s final week on Wednesday afternoon, only two hours after Apple offered a disgusting no-comment by announcing, “I gotta take a s–t,” in front of both male and female reporters, and chuckling as he walked away.

Never mind the on-field arguments with coaches and refusal to take the field with the scout team, which Leonard gets to later down. The real problem here is that he dared to say “shit” in front of “both male and female reporters.” As many women noted on Twitter, it’s not like they don’t know or hear the word:

Those poor fragile women! How could their little lady brains handle such vulgarity? https://t.co/dnKCUFC6LZ

I’m hoping your intent was an attempt to be respectful of female reporters, but you failed miserably. Eli Apple is predictably asisine, but you displayed the worst kind of insidious sexism.

I didn't know women weren't aware of what poop is!

Look at you trying to get feminist brownie points. “Including female reporters”..you sound dumb. pic.twitter.com/iP4oqZftCg

So, yeah, amazingly enough, Apple may not have made the worst move Wednesday. Leonard’s high-handed “won’t someone think of the female reporters” line makes him look much worse.

But there’s still a big problem with Apple, with one team source telling ESPN’s Josina Anderson he “will not be in an NYG uniform next year” even with the team still likely on the hook for much of his fully guaranteed salary and without much of a trade market for him. His stock has fallen massively, and his NFL future is uncertain. However, of all the reasons to criticize, bench and possibly even cut Apple, saying “shit” in front of reporters isn’t one, no matter what Leonard thinks.