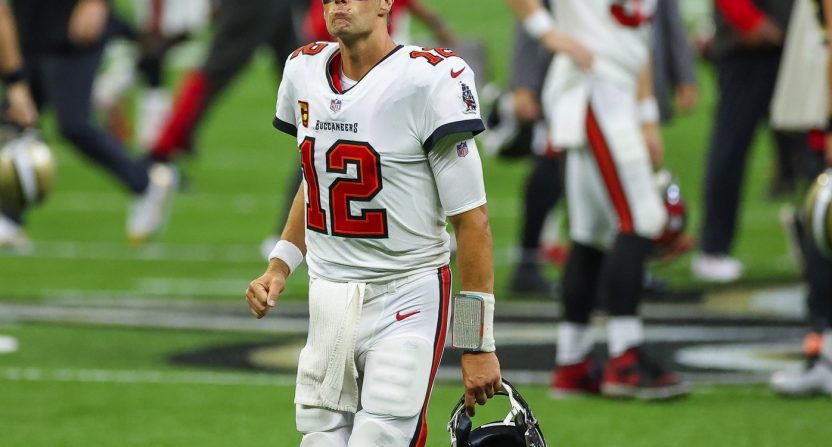 The Sunday viewership numbers for Week 1 of the 2020 NFL season are out, and it’s a mixed bag for the three networks.

We’ll start with the good news. Per SBJ’s Austin Karp, both of Fox’s windows were up in overall viewership. The early window, highlighted by Packers-Vikings in a set of four games, was up 7% to 13.5 million viewers. The late window, Bucs-Saints in nearly the entire country, rose by 8% to 25.85 million viewers. Fox also touted a four-year overnight high for the late window.

The hodgepodge of games on CBS (six games, with most of the country getting…Dolphins-Patriots, I guess) was down by 12% to 13.6 million viewers. Last year, the network also had a vast slate of games in Week 1, with Titans-Browns and Chiefs-Jaguars going to most households, and that window drew an average of 15.4 million viewers.

Something interesting that SBJ noted: the Jets (CBS) and Chargers (also CBS, but starting in the late window) absolutely tanked locally, drawing a 6.0 and 4.9, respectively, in New York and Los Angeles (the country’s two biggest markets). The Chargers number doesn’t surprise me all that much, given that the market was airing Bucs-Saints at the same time, but were New Yorkers really watching Eagles-WFC instead of Jets-Bills?

UPDATE: Monday Night Football numbers are in, per ShowBuzz Daily. Steelers-Giants, the early game, drew 10.8 million viewers. Titans-Broncos, the late game, drew 7.7 million viewers. The early game was down 21%, and the late game was down a startling 38%. Despite the declines, they were pretty easily the first and second most-watched shows of the night on cable, though Dancing With The Stars edged past the late game when broadcast viewership was also included.

As for other Sunday sports content, it would be tough to blame any of those events for putting much of a dent in the NFL’s viewership (unlike on this past Thursday night). Per ShowBuzz Daily, Game 6 of the Clippers-Nuggets series drew 1.3 million viewers on ESPN, while the US Open Men’s Final between Alexander Zverev and Dominic Thiem that followed the playoff game drew 1.4.8 million viewers. NBC’s IndyCar broadcast drew 635,000 viewers, and Game 4 of the Lightning-Islanders series in the next window drew 944,000 viewers. Alec Mills’ no-hitter for the Cubs over the Brewers, which aired nationally on TBS, drew just 233,000 viewers.

For some extra context for these NFL viewership numbers, it’s worth noting that while all the Week 1 Sunday games, no other sports event that aired over the past week drew as many as five million. Hell, only one MLB game (the Fox Saturday night window, highlighted by Dodgers-Astros) and two NHL games (Game 4 of Golden Knights-Stars and Game 2 of Islanders-Lightning) even cracked the one million mark. So yes, while three windows dropped in Week 1, the NFL is still drubbing the rest of the sports landscape.

What do we have in store for Week 2? Thursday Night Football (airing exclusively on NFL Network) has an Ohio-centric matchup between the Browns and Bengals, which will be compared to last year’s Bucs-Panthers game. It’ll also be going head to head with Game 2 of the Heat-Celtics Eastern Conference Finals, and the potential Game 6 of the Lightning-Islanders Eastern Conference Finals. CBS has the Week 2 doubleheader, with the first half highlighted by Giants-Bears and Broncos-Steelers, and the second half highlighted by the Chiefs-Chargers game of the week matchup (though it could be argued that Ravens-Texans, also airing in the late window on CBS, is the better game). Fox has the singleheader in Week 2, and their slate contains Falcons-Cowboys, Lions-Packers, 49ers-Jets, Eagles-Rams, and Panthers-Bucs.

Sunday Night Football will be primed for a rise in Week 2, as the Patriots-Seahawks matchup will be comped to Eagles-Falcons from a year ago. Monday Night Football also seems likely to see a jump – last year, the matchup was Browns-Jets. This year, it’s Saints-Raiders.