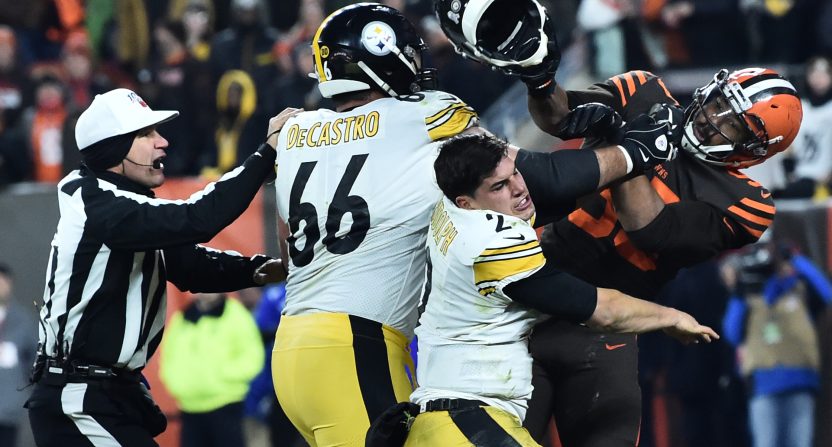 The Pittsburgh Steelers and the Cleveland Browns have a long and storied rivalry but what happened at the end of Thursday night’s game will be a stain on that rivalry that won’t go away for a long time.

With eight seconds left in Cleveland’s 21-7 victory over Pittsburgh, Myles Garrett took down Steelers QB Mason Rudolph and in the ensuing tussle, Garrett ripped Rudolph’s helmet off and used it as a weapon, hitting Rudolph in the head. Once that happened, Maurkice Pouncey and David DeCastro retaliated by taking down Garrett and were punching and kicking him. Larry Ogunjobi then retaliated against Pouncey and DeCastro.

Myles Garrett swings helmet then gets stomped on by the Steelers wow pic.twitter.com/kDl8ThEe67

"That's one of the worst things I've ever seen on a professional sports field" pic.twitter.com/UdOrcDV7Y0

Garrett, Ogunjobi, and Pouncey were ejected for their involvement. On the Fox broadcast, Troy Aikman said Garrett hitting Rudolph was “one of the worst things I’ve ever seen on a professional sports field.” Many others in the media felt similarly and in the immediate aftermath, most strongly criticized Garrett for what he did.

Wildest thing I ever saw. Was 10 yards from it. Myles Garrett completely lost it, connected the helmet square on Mason Rudolph’s head. And the Browns were celebrating the whole thing from the sideline.

Myles Garrett should absolutely be suspended for that garbage!

I’ve never seen anything close to what Myles Garrett just did.

They’re going be some heavy suspensions. Garrett might get the rest of the season off. Pouncey gone a min of 4 gms. WTF was Garrett thinking?

Myles Garrett should be suspended for the rest of the season.

That’s assault, Myles Garrett should not play another game this season. pic.twitter.com/rH4ko6lAdV

Myles Garrett should get a LONG suspension for that. Ripping off a quaterback's helmet, then bashing the helmetless quarterback in the head with his own helmet??? Never seen anything like it. So low.

Hard to blame the Steelers who retaliated against Myles Garrett in the end zone.

Myles Garrett should be suspended for the rest of the yearpic.twitter.com/Gu61ibffya

You can't be about player safety and allow Myles Garrett to play again this season. End of story.

Myles Garrett just did something that I’ve only seen in NFL practices. Guaranteed to be suspended.

Never seen any player ever act like that ever and I have played with/against some of the toughest SOB’s ever! That is the most trash BS I have ever seen. Myles Garrett hit another player ON TOP OF THE HEAD with a f’ing helmet!

Damn, based on the fervor, Garrett gonna get suspended longer than if he punched his girlfriend.

The Browns fans defending Myles Garrett right now would be demanding a public execution if Cam Heyward did the same thing to Baker Mayfield.

“Never beat Baltimore and Pittsburgh in the same year, and then we have to talk about this … we don’t condone that.”

Go to @MylesLGarrett page and you’ll see the headline: “A Hero is made by the path he chooses, not by the power he is graced with.” Yet, he goes and does what he did to Mason Rudolph. This calls for an automatic SEASON-ENDING SUSPENSION. He should be DONE for the rest of the year

I have no idea what I just saw on TNF w/ @MylesLGarrett ? How in the world can u be so unaware? How can u allow ur emotions to go unchecked & swing a helmet at another player’s head (who’s helmet u tore off to hit him with)? Im physically upset right now & I was watching on TV!

Even head coach Freddie Kitchens and some of Garrett’s teammates like Baker Mayfield publicly denounced what Garrett did. It probably wasn’t what they wanted to talk about but many Browns players who spoke publicly in the immediate aftermath did not support their teammate for what he did.

What’s ultimately disappointing is that Garrett’s act totally took away from everyone talking about the Browns getting a massive win against the Steelers. Cleveland has had a rough season, especially when they were projected to be in the playoffs before the season, and a win against a rival may have been the thing that got things on the right track. Instead, we got this.

The NFL has a major decision in how to handle this. There will likely be suspensions and fines for Garrett and/or Pouncey and this will likely dominate discussion for the rest of the week so expect to see more takes in the coming days.