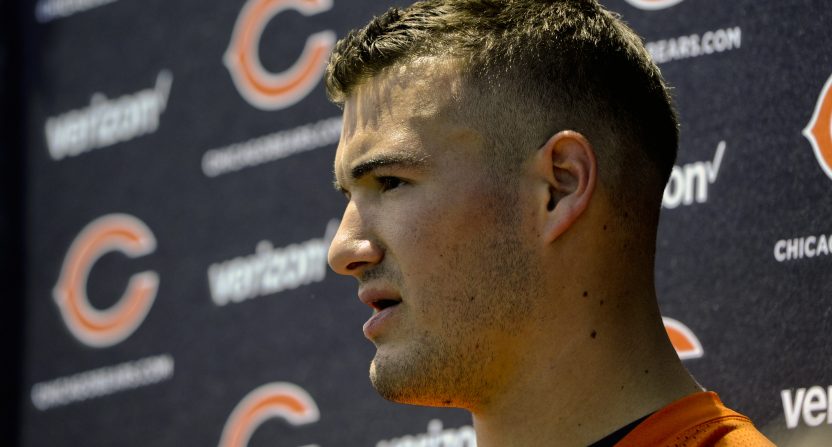 The first half of the 2019 NFL season has been a disaster for the Chicago Bears. After going 12-4 to win the NFC North in 2018 (Matt Nagy’s first season as head coach), the Bears have lost four straight games to bring their record to 3-5. And while there’s plenty of blame to go around, it starts with quarterback Mitch Trubisky, and everyone knows that.

Yeah, the Bears went 12-4 with Trubisky in 2018, but they had a special defense and he actually played decently; 24 TD passes, 12 INTs, 95.4 passer rating, 7.4 yards gained per pass attempt, etc. This year, he’s regressed both statistically and to the eye test. He has five TD passes, three INTs, an 80.1 passer rating, and is averaging just 5.6 yards gained per pass attempt in his third season. It *looks* even worse, with brutal inaccuracy, not going through his progressions, panicking in the pocket, terrible footwork, and rarely throwing with conviction. The Bears’ roster isn’t without flaws, but they’re likely in title contention with even league-average QB play.

Naturally, sports channels and debate shows have talked about this all on a daily basis lately, and Trubisky’s had enough of seeing/hearing it. Before Wednesday’s Bears practice, Trubisky told the media at Halas Hall that he’s been trying to get televisions turned off at the facility as a way to block out negativity and criticism.

Mitch Trubisky said he’s trying to get some of the televisions inside Halas Hall turned off. He’s tired of watching people criticize his team on TV.

“Yeah, I’ve done pretty good with that. Trying to get some of these TVs in the building turned off because you’ve got too many people talking on TV about us and what they think about us, what we should do, what we are, and what we’re not. But they don’t really know who we are or what we’re capable of as people, or what we’re going through or what we’re thinking. It’s just the outside viewers looking in. So, tunnel vision, earmuffs, and just come to work every day and try to get better and get back to what we know we’re capable of doing.”

While this has already led to columns about how Trubisky can’t handle the criticism and it’s another sign of his shortcomings, it’s actually a pretty reasonable request.

Trubisky knows he sucks right now. He knows he’s the main reason the Bears are 3-5 rather than contending for a Super Bowl. He knows he’s letting his teammates down and that he’s dangerously close to losing the locker room if he hasn’t already. He knows he’s lost the fans’ trust in a major market. He knows he was drafted before Patrick Mahomes and Deshaun Watson, two MVP-level quarterbacks, and that Bears GM Ryan Pace went all-in—trading up—to draft him at No. 2. He knows the Bears will go another direction at QB very soon if his play doesn’t improve significantly. He knows his chances to land a big payday—from any team—are getting slimmer with each crappy pass he puts on film.

So what good does it really do for Trubisky to hear Stephen A. Smith scream about how he’s holding the Bears back, or hear Skip Bayless yammer away about how he’s Midwest Bortles? He already has *plenty* enough reasons to be motivated, and the last thing he needs right now is any additional negative energy. It also has to be awkward for teammates and coaches to be sit next to Trubisky while the media blasts him on TV. Even if his teammates know what’s being said is accurate and would rather have someone else playing quarterback (like maybe even Chase Daniel), they also know Trubisky is already well aware of it and doesn’t need his already questionable confidence completely shot.

Just about any pro athlete or coach interviewed will say they block out the noise, don’t listen to what talking heads say, and don’t read articles about their performance (and hateful social media comments could especially be damaging to anyone’s psyche). So, with that in mind, it’s interesting that organizations have ESPN, FS1,and NFL Network all over the cafeteria, weight room, locker room, etc. Gone are the days of highlight shows, and sports daytime programming is largely full of TV personalities screaming with criticism of a particular team, player, coach, or front office. Trubisky’s request may actually lead to some other organizations considering the same.