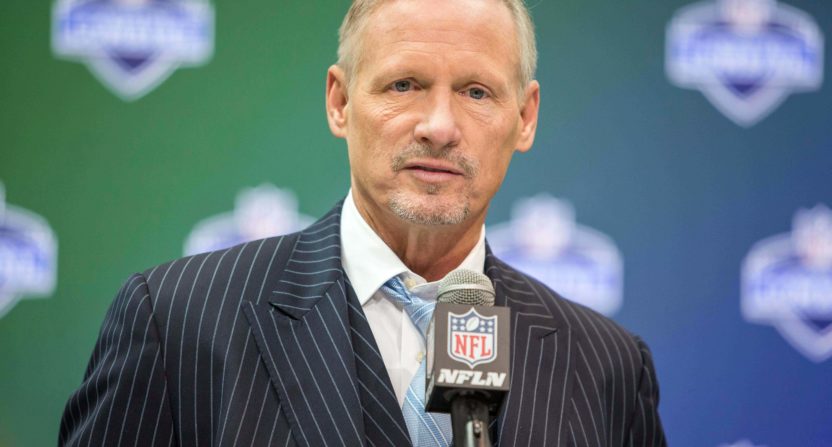 Mike Mayock has been with the NFL Network since 2005, and he’s become one of the top draft gurus in the sport. Mayock also spent a few seasons as the color analyst for the league’s Thursday slate of games, until CBS took over the package in 2o14.

Now Mayock is pretty much draft-oriented, but he pretty clearly thinks he’s earned more time doing game commentary. Just ask him, as two separate interviewers did this past week. First there was a radio interview on Houston’s SportsRadio 610, as transcribed by The Big Lead:

I am highly frustrated and agitated. When you don’t have a big name — I played two years, and I wasn’t any good, and I couldn’t stay healthy — if you don’t have a Hall of Fame jacket it’s hard to get a high-level job calling games in our industry.

And it bothers me that network executives think that the only — let’s put it this way: Fox has Thursday Night Football and they feel like the only person who can do that game, and if he can’t then Troy Aikman’s gotta do two a week. I don’t understand that thought process. I mean, Troy’s great, but there’s a stable of other guys who can do it really well.

If you remove the self-interest, those are very valid points. And Mayock advocating for himself isn’t a bad thing. He’s done good work for a long time only to be passed up by the name brands of former players. It’s clearly something he’s focused on, because Mayock was also the centerpiece interview for this week’s Richard Deitsch media column, now at The Athletic.

The whole thing is worth reading, if you’re a subscriber, and there’s so much more to it, but let’s focus on this one talking point and not aggregate the paywalled content:

Again, this is my own personal frustration. I am highly frustrated and agitated that I cannot find a television gig in the fall to do games because that is the favorite thing I do. I love the draft, but to me there is nothing better than walking on the grass and talking to the coaches and players and being part of that three hours where you either know what you are talking about or you don’t. There is nowhere to hide. I love that three hours and I miss it.

The exact same language! He really is frustrated and agitated! Mayock expanded more in this setting, though, given time likely not afforded in a live radio hit:

I get really frustrated when all I see are television executives hiring big name players that have not put the time and effort in learning how to do it properly. I think Tony Romo is an anomaly. I enjoyed him last year. I thought he brought a different color and candor to what was going on. But I feel like we go through 10 or 20 former players and coaches before we find one guy that sticks.

Those are once again valid critiques of the current state of sports broadcasting. It’s always a tough balance, because some of the very best analysts are people who are just out of the sport, assuming they can be effective communicators, as Mayock notes. But there are some pretty rough color guys getting regular work on Sunday across the networks, and often those games would be better served with a different voice.

Mayock clearly thinks he’s one of those voices. So far no one with any hiring authority has agreed with him. But he’s clearly making an effort to get his interest known.