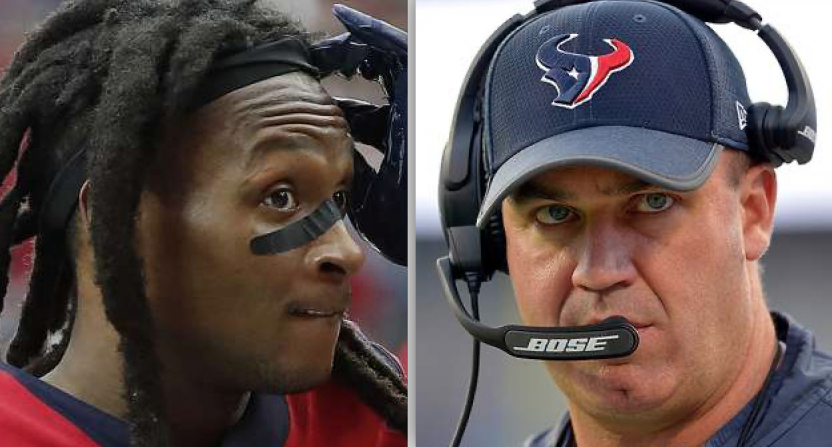 The Houston Texans trading star receiver DeAndre Hopkins to the Arizona Cardinals on Monday was shocking because the deal made little sense. In exchange for one of the top receivers in the NFL (Hopkins tied for third in the league with 104 catches last season), Houston received running back David Johnson and two lower-round draft picks in return.

But maybe Texans head coach and general manager Bill O’Brien traded Hopkins for non-football reasons. That’s what NFL Network analyst and Hall of Fame receiver Michael Irvin says he was told by Hopkins while appearing Wednesday morning on ESPN’s Get Up.

According to Irvin, who had two phone conversations with Hopkins, O’Brien disagreed with the receiver’s lifestyle and that was apparently why the coach/GM decided to move him off the Texans’ roster. Here’s the clip:

“[O’Brien] told DeAndre Hopkins in a meeting, ‘The last time I had to have a meeting like this was with Aaron Hernandez’,” said Irvin. “[Hopkins] said, ‘That blew my mind, that he would bring that up. I’ve never been in any trouble. I don’t know why he would equate me with Aaron Hernandez.’ From there, the meeting just deteriorated.

“He got into talking about, DeAndre Hopkins has a few kids from different women, and he told DeAndre that he doesn’t like that he has his baby mamas around sometimes. From that, I think the relationship just went bad and thus we got a trade.”

Those are explosive allegations against O’Brien, holding a player’s personal life against him when it seemingly had no effect on his performance. Irvin mentioned that there was “a bit of a power struggle” between Hopkins and O’Brien, with the coach thinking that the receiver had “too much influence over the locker room.”

It’s not clear what exactly that means, and we may never know. But O’Brien comes from that Bill Belichick school of management that doesn’t like any player to become bigger than the team, than the program. (In Detroit, another Belichick protege, Matt Patricia, has taken a similar approach, trading safety Quandre Diggs and exploring a deal for Darius Slay, both outspoken team leaders on the Lions’ defense.)

But there’s a significant difference between exerting influence over teammates, perhaps going against whatever message and philosophy the coaching staff is attempting to establish, and criticizing the way someone lives. That criticism is especially outlandish when comparing Hopkins to someone convicted of murder and sentenced to life in prison with no possibility of parole.

To be fair, O’Brien’s side of the story hasn’t come out yet — and maybe it won’t, though a denial of Hopkins’ allegations would be expected. However, if what Hopkins says is true, O’Brien’s relationship with his current players and anybody else who might consider playing for the Texans could be significantly hurt.

UPDATE — Hopkins responded to the revelations and subsequent uproar on Twitter:

This is being blown way out of proportion. As I’ve said before, I enjoyed and am proud of my time with the Texans. I have the utmost respect for Coach O’Brien and that will not change.  Now, I’m ready to play for the Cardinals.

Hopkins didn’t exactly deny Irvin’s allegations with that tweet, did he… ? But he’s on to Arizona and new coach Kliff Kingsbury.