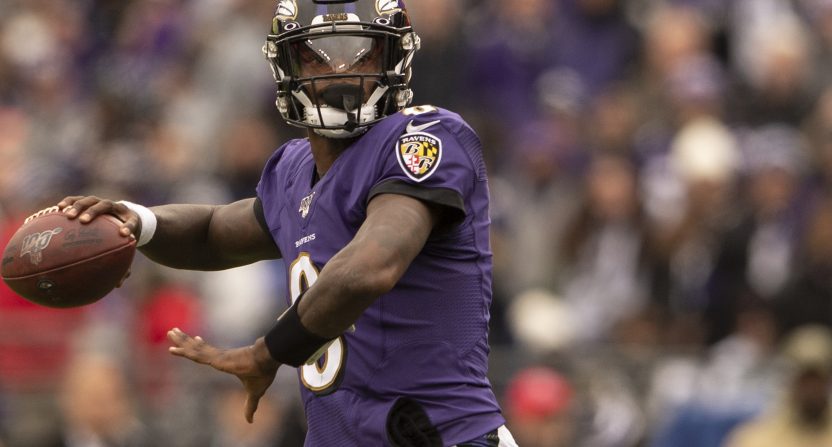 Lombardi made his claim on this week’s edition of the GM Shuffle podcast, hosted by he and Adnan Virk.

Here’s the podcast where Lombardi made his claim, and a transcription.

“Here’s what happened. The first time he comes in, Marty Mornhinweg – remember him, we’re building the team around him – Marty says to the coaches, this is fact, ‘when are we going to move him to receiver?'”

“That didn’t happen. Never said that,” Mornhinweg responded in the statement. “My thoughts before the draft, and even more when we started working with Lamar, was that this young man was going to be a special quarterback. Very early we saw that along with all of his throwing and escape abilities, he reads the field as well as any young quarterback I ever worked with.”

“Organizationally, we were on the same page with Lamar, and I thought [former general manager] Ozzie [Newsome] and [general manager] Eric [DeCosta] did a great job to take him where we did.

“Marty was excited from the beginning to coach Lamar and was instrumental in helping him progress through his rookie season.”

Every conversation I had with Marty Mornhinweg was positive about Lamar.. Matter of fact we spoke before the draft and we both shared in depth thoughts.. The Ravens drafted Lamar….I seriously doubt that coming from Marty!!!!

This isn’t the first time Lombardi has said some dumb shit. Two years ago, months before the Eagles won the Super Bowl, Lombardi said that Philadelphia head coach Doug Pederson “might be less qualified to coach a team than anyone I’ve ever seen in my 30-plus years in the NFL.” Pederson got the last laugh on that occasion, and while it’s a bit much to say Mornhinweg (who was let go by the Ravens after the 2018 season) has also gotten the last laugh, he’s not taking letting Lombardi’s shot at his decision-making ability go idly by.