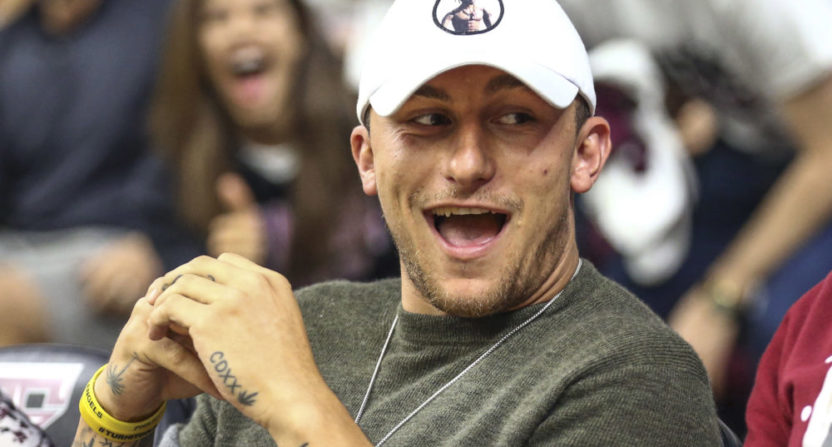 While Johnny Manziel’s CFL plans appear to have hit a snag thanks to the Hamilton Tiger-Cats not meeting his contract demands, the #ComebackSZN is taking a new turn. Manziel tweeted Wednesday that he’ll be joining the Spring League, a three-week scouting event in Austin, Texas where teams play two games each.

And, as Turner Sports pointed out in their tweet on this, those games are going to be televised on their forthcoming premium streaming service:

Back in Texas where it all started. I'll be joining @TheSpringLeague in Austin to get #ComebackSZN started! Can't wait to get back on the field and show NFL scouts what I can do! #cantwaitforspring pic.twitter.com/zMk5223HCc

“Football has been a huge part of my life for as long as I can remember. Sometimes you take for granted how much you value something until it’s gone. My goal is to make it back to the NFL and I realize I have to earn that privilege. The Spring League has provided me with a great opportunity to play ball again, and ultimately, that is all I want to do. I miss the competition. I’d like to thank Brian Woods and The Spring League staff for this opportunity to play the game I love. I’ve made my share of mistakes, but I’m 25 years old and I know my best football is ahead of me.”

“We’re excited to have such a dynamic player in Johhny Manziel taking part in the Spring League,” Spring League CEO Brian Woods said in a statement provided to Bleacher Report. “We believe our platform is the ideal forum for Mr. Manziel to enact his NFL comeback.”

It should be noted that Bleacher Report is owned by Turner, and it’s interesting that they appear to have gotten the scoop on this. B/R tweeted this story out at 10:01 a.m. Eastern Wednesday, with the Turner PR tweet coming at 10:16, as well as the Spring League’s tweet, and Manziel’s own tweet coming at 10:18. (That’s when TMZ’s tweet of their story on this rolled out, too.)

The Spring League announced a partnership with Turner to stream their games last month:

#TheSpringLeague is excited to be a launch partner of the new @TurnerSportsPR premium live sports streaming service debuting this Spring! It's just one more reason we #cantwaitforspring. pic.twitter.com/0CascZtQ17

None of that’s nefarious; Manziel joining the Spring League is newsworthy, and it makes sense for the league to direct that scoop to a corporate partner. But it’s notable. And it will worth keeping an eye on how this goes and if it sparks any NFL interest in Manziel, or convinces the Tiger-Cats to make him a bigger offer (or trade his rights to another team willing to pay him the kind of money he’s asking for). It’s also worth noting that the Spring League offered Manziel a personal invitation to participate last year, their inaugural year; former NFL players Greg Hardy and Kellen Winslow Jr. played, but Manziel turned them down.

However, last year’s offer included conditions of “nightly check-ins with a team staff member at 9:30 PM and passing a USADA drug test on April 5th.” There’s no word on if this year’s offer carries those conditions, but Manziel does appear to be in a better place than he previously was; he’s candidly spoken about his mistakes, discussed his bipolar diagnosis and his past self-medication, and was cleared to sign a contract by CFL commissioner Randy Ambrosie following a detailed investigation.

So bringing him in looks like less of a risk for the Spring League now than it might have been last year. It’s a logical step for Manziel, too; seeing as he hasn’t been able to agree to terms with the CFL, this lets him showcase his skills at a somewhat high-profile venue with a commitment of only a few weeks, freeing him up to sign with a CFL or NFL team if one takes interest afterwards. And he has to do something on the football front to keep the merchandise he’s selling relevant:

It will also be interesting to see how this fits in with that Turner streaming service. This is one of the few events we know will be on there at this point, but we don’t have a launch date, a price point, or even a name for the service at this point. With the Spring League games set for April 7 and 14, though, it’s a firm bet the service will be launched by then. And it will be worth keeping an eye on how much interest it draws. The bet from here is that the interest is probably going to rise with Manziel’s involvement, but how much it will rise is a valid question. But we now know that the next part of the #ComebackSZN will be televised. Or at least streamed.