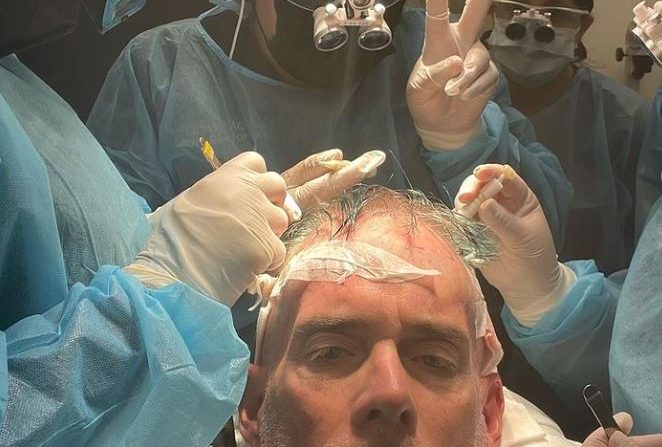 Buck shared the information on Instagram, posting pictures of himself undergoing the procedure and assuring everyone that he’ll have a new head of hair in time for Week 1 of the NFL season, when he and Troy Aikman kick off their tenure with ESPN and Monday Night Football.

“Training camp doesn’t just start for players,” Buck wrote on Instagram. “New network, newly arranged follicles. Hello ESPN!!! Cannot wait for September 12, and for this green to wash out of my hair. I promise I’ll look normal-ish by week 1. Oh and why four people for one head??? It’s a big head!”

For Buck, this is somewhat of a routine procedure, albeit one that nearly cost him his voice and career as a broadcaster not too long ago. In his 2017 memoir Lucky Bastard: My Life, My Dad, And The Things I’m Not Allowed To Say On TV, Buck declared himself a hair plug addict.

Buck began hair transplant treatments in 1993, and by 2011 he underwent his eighth procedure. But something went wrong during his eighth hair replacement surgery, as Buck woke up from the six-hour-plus procedure without a voice.

As Buck described on The Howard Stern Show after his memoir was released in 2017, a breathing tube was placed down his throat to protect him during the hair plug surgery and a cuff gets inflated to hold it in place. Buck was told the cuff likely got jostled during the surgery and paralyzed his vocal cord.

The damaged vocal cord forced Buck to miss a portion of the 2011 MLB season and nearly ruined his career. But it didn’t convince him to stop getting hair transplant surgeries, as seen by his recent Instagram post. In the same memoir that Buck admits his hair plug addiction, he also explained why he felt pressured to undergo the procedure he described as “barbaric.”

“Broadcasting is a brutal, often unfair business, where looks are valued more than skill,” Buck said. “I was worried that if I lost my hair, I would lose my job. O.K., that’s bulls—-. It was vanity. Pure vanity. I just told myself I was doing it for TV.”

The surgery nearly cost Buck his voice, and he self-admittedly referred to it as painful, barbaric, vain and addiction feeding. Buck certainly hasn’t done a great job selling the procedure, but credit him for sharing the somewhat humiliating image of getting hair plugs.

That’s a lot of work for a person who gets paid for his voice much more than his looks, especially at this point in his well-established broadcasting career. Unlike his eighth surgery, hopefully there’s no fallout from this hair plug procedure, and Buck’s voice will be ready to go for the NFL season.