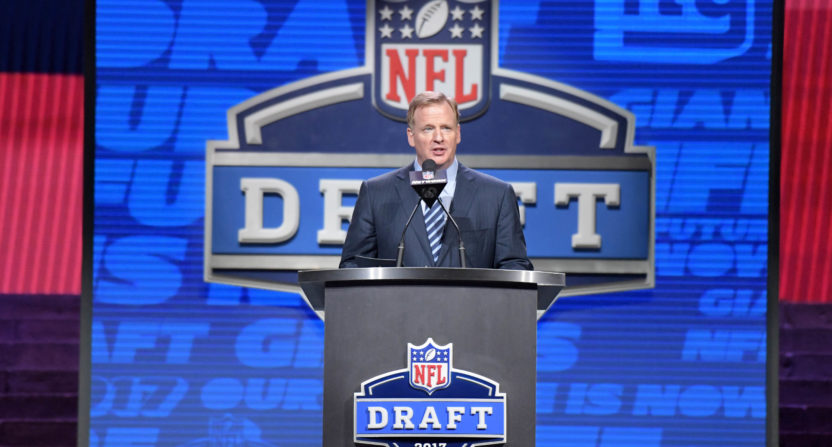 The NFL Draft will reportedly be airing on a *third* network this year. According to Pro Football Talk, in addition to ESPN and NFL Network, Fox will be airing the NFL Draft. The network reportedly won’t be producing its own coverage, but instead will be simulcasting the NFL Network’s feed of the event from Dallas.

It’s believed FOX will carry a simulcast of the NFL Network feed, with ESPN continuing to televise the event on its own.

Last year, a separate source told PFT that the league already had the ability to place the draft on a broadcast network, hinting that it would be the next logical step in making the draft a bigger and better event. The league drew rave reviews for choosing Philadelphia as the destination, with more than 70,000 fans showing up for the first night.

The NFL Draft is one of the most tedious events on the sports calendar each year, typically stretching to over three hours long just for the first round, even with recent changes intended to speed up the draft itself.

As for how much of the Draft will air on Fox, Sports Business Journal reports that the first two nights (Thursday and Friday, Rounds 1-3) will be aired, but coverage on Saturday of the final four rounds is still unknown. SBJ also reports that Fox will co-produce the NFL Network broadcast and some of Fox’s NFL talent will be used (presumably, chief NFL insider Jay Glazer).

This has been a pretty decent week for Fox’s NFL coverage, as on Monday, a report emerged that Fox would likely be acquiring ESPN’s lone Wild Card playoff game. Add in coverage of the Draft (even if it’s just a simulcast), and Fox seems poised to add two high-viewership NFL events to their calendar just weeks after acquiring Thursday Night Football for the next five seasons.

The first round of the NFL Draft is scheduled to take place on April 26th.