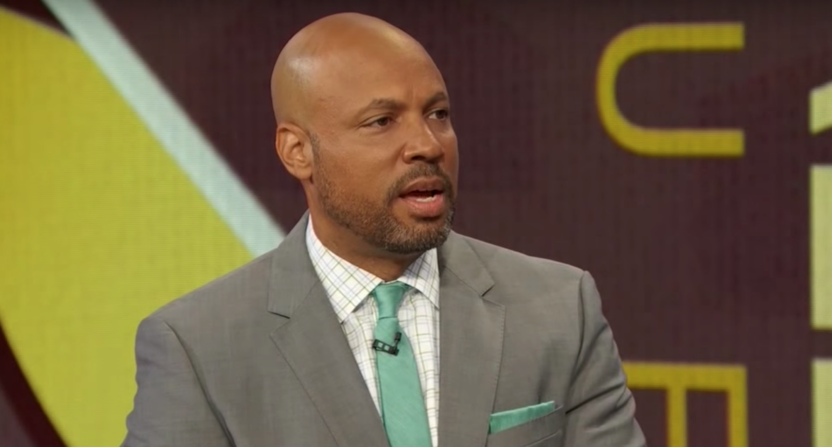 After seven years at Sports Illustrated and four more at ESPN, longtime pro football reporter Jim Trotter has been hired by NFL Media, the league announced Tuesday. Trotter will contribute to both NFL.com and NFL Network in a variety of roles.

Trotter’s resume is long and impressive. He spent 18 years at the San Diego Union-Tribune in roles including Chargers beat writer and national NFL columnist. From there, he moved on to Sports Illustrated, where he wrote features from 2007-14, when he jumped to ESPN. His four-year run at ESPN, included appearances on Sunday NFL Countdown, NFL Insiders and other shows, as well as reporting for ESPN.com and ESPN The Magazine.

He is a longtime member of the NFL Hall of Fame selection committee and currently serves as president of the Pro Football Writers of America. He has also written two books about the late Junior Seau and is currently working on one with Larry Fitzgerald.

Trotter announced earlier this month that he was leaving ESPN, but did not reveal his destination until Tuesday.

Today ends my four-year run at ESPN. Thanks to management for allowing me out of my contract and to IMMENSELY talented (and patient) producers who always helped me along. Also major thanks to @BobLeyESPN & @OTLonESPN. Luv the show. I’m excited for the next step in my journey.

Trotter is a strong hire for NFL Media, given his versatility as a reporter and his comfort across multiple platforms. With his experience writing features and columns, breaking news and appearing on television, he should be able to contribute all sorts of content to NFL.com and Network. It seems noteworthy that NFL Media included in its press release the fact that Trotter has “reported extensively on player activism and social justice,” suggesting that aspect of the reporter’s work was appealing to his new employer.

NFL Media also benefits from Trotter’s presence in another way. League-owned networks constantly struggle with the (often fair) criticism that their reporting can’t be fully trusted or their analysis isn’t genuine because they’re run by the entity they cover. Bringing in respected voices who have established themselves at independent outlets lends them a little extra credibility with critical consumers. Employing someone as accomplished and respected as Trotter makes the whole operation look good.