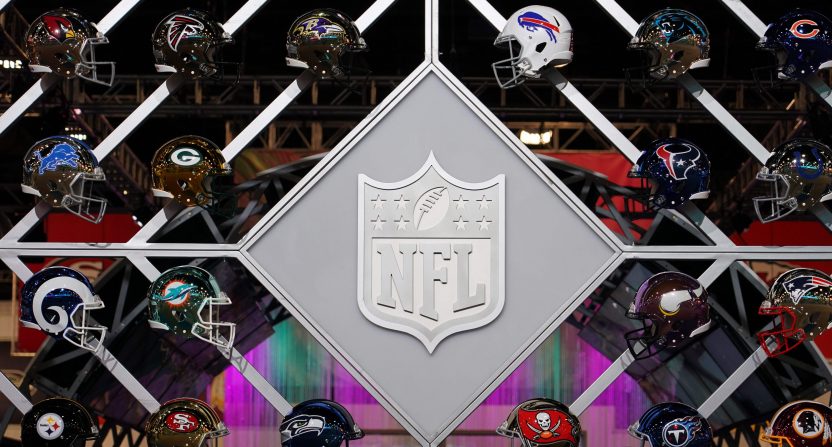 The NFL made their new round of TV deals official on Thursday, and there are plenty of interesting points within each deal. In fact, there’s so much going on that you might have overlooked some of the included information. Here’s one point from each of the NFL’s five TV deals that you might have overlooked while reading about billions of dollars, playoff games, and streaming services.

Importantly, NBC also retains flex scheduling for Sunday Night Football, so the best game of the week isn’t guaranteed to be on ESPN. But the new flex scheduling ensures ESPN will get better games down the stretch instead of potential dogs. ESPN avoided most of these potholes last season, but won’t always be so lucky. This at least ensures that the NFL’s premier windows will all have games that have national appeal and that there won’t be a sneaky relevant game going to something like 8% of the country on Sunday afternoon.

Peacock will also serve as the exclusive national home of six NFL regular-season games – one each year from 2023-28 (giving NBC Sports an additional regular-season game in those seasons) – and will launch a virtual NFL channel, highlighting classic games, as well as NFL Films’ series, library, and archival content, which will all also be available on demand.

More live, exclusive games, yada yada yada. But…NFL Films! That’s a ton of archival content that will fit right in on Peacock, which is already adding WWE Network’s dizzying content library to its services. Now of course, this doesn’t mean that every piece of content created by the NFL will be available on Peacock, but it does seem like this will include a bunch of the content available on NFL Game Pass (A Football Life, Hard Knocks, etc).

The company also has the capability to collaborate with the NFL to create alternate game telecasts, similar to the highly acclaimed, family-friendly Wild Card playoff game production on Nickelodeon this past January.

I don’t think this is a feature CBS is going to use very often. For instance, a random Week 8 game between the Dolphins and Bills isn’t going to get an alternate broadcast. But for the network’s playoff games and their Thanksgiving game? Yeah, I think it could come into play more often. I doubt every alternate broadcast will be a Nickelodeon-style one – maybe we’ll get an NFL Today broadcast, similar to what we’ve seen with ESPN’s Megacasts. I wouldn’t at all be surprised to see a Comedy Central broadcast either, featuring comedians who love football riffing about the game as it’s happening. In short, the door is open for several possibilities here, and while CBS shouldn’t beat the concept of alternate broadcasts into the ground, they’ll definitely be back.

Tubi gets in on the act. From Fox’s release, here’s the blurb about Tubi.

Alright, so what the hell is Tubi? Tubi is a streaming service (of course) that Fox bought last year. It’s free and ad-supported, and the included content is all over the map. NFL condensed games and whatever the premiere (as in first run, or “premier” as in “premium”? It’s unclear) VOD is would be a feather in the cap for the streaming service. Tubi has received far less attention than its subscription-based competition, and given its status as a free service, any NFL content could be used to entice viewers that are used to paying for it.

Amazon is picking up some sort of weekly show, too. From Amazon’s release, here’s the blurb about their weekly show.

As part of the new deal, Prime Video also secured rights to a weekly slate of original NFL programming and expanded rights to in-game highlights for all NFL matchups.

Hmmm….original programming, you say? It’s unclear what this will be. Given the various feeds Amazon added to Thursday Night Football in 2020, this might not even be something like NFL Films Presents, but instead something featuring the talent used on those TNF feeds. A Madden-centric show also would make sense when you consider that Amazon owns Twitch and has been making an impact on the gaming world. There are plenty of possibilities here, and I’m sure we’ll learn more in the coming months and years.