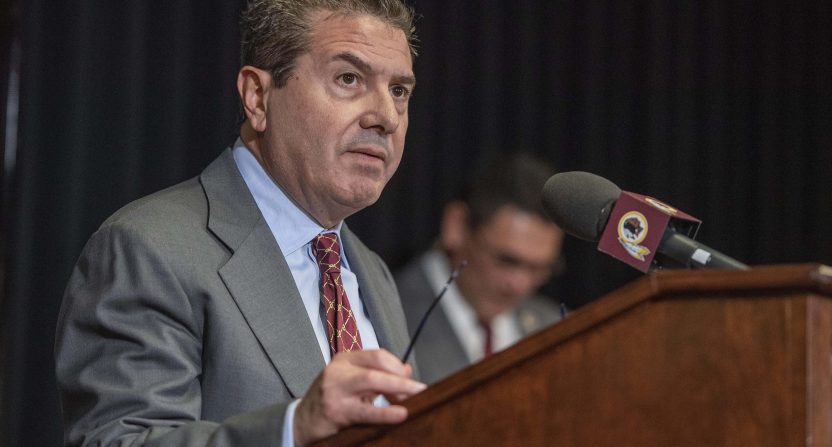 Washington Football Team owner Daniel Snyder is suing a media company based in India for defamation after they posted negative stories about Snyder and his NFL team.

The company, Media Entertainment Arts WorldWide, posted stories about Snyder that he claimed they knew were false. The suit seeks $10 million in damages, and also attempts to determine if and/or who paid MEA WorldWide to post the stories, per the New York Times.

In a lawsuit filed Friday in New Delhi and in federal court papers in California, Snyder said the news site, Media Entertainment Arts WorldWide, whose parent company is based in India, published stories that it knew were false and designed to malign him, some using information from anonymous posts on social news sites including Reddit.

The suit is Snyder’s first public strike after a wave of attacks on his operation of the team, from minority owners and sponsors who sought to divest, to a Washington Post report of widespread sexual harassment within its front office. Snyder, who seeks $10 million in damages, wants to identify if, and by whom, M.E.A. WorldWide was paid to publish the articles, his lawyer, Rizwan A. Qureshi of the firm Reed Smith, said in a statement.

Last month, in advance of the Washington Post’s explosive story about a culture of sexual harassment in the Redskins organization, many media members amplified the content of the story before it went live, which led to rampant speculation about the article’s content. MEA WorldWide then posted articles based around these assertions from social media users with zero evidence.

The stories, which have since been removed from M.E.A. WorldWide’s website, asserted that Snyder was involved in sex trafficking and speculated that the team’s minority owners were “looking at bringing him down citing inappropriate and unchaste behavior as one of the major reasons,” according to parts of the story included in the complaint.

The stories surfaced in mid-July and elements of them were alluded to or repeated on social media. They appeared just as The Washington Post published an investigation that detailed allegations made by 15 women of sexual harassment, misconduct and abusive behavior by team executives and football personnel over more than a dozen years.

Before the newspaper published its article on July 16, several posts on Facebook and Twitter suggested that The Post would include some of the information that ultimately appeared in M.E.A. WorldWide stories. The Post’s article did not include the details flagged on social media or Reddit, or those included in the M.E.A. WorldWide stories that are now the subject of the lawsuit.

It’s very easy to hate Daniel Snyder. He is not a very likable person. However, I actually have some sympathy for him here. The Post story was quite damning toward the organization, but there weren’t any staunch denials about the content in the story itself. But for a media outlet to run with rampant internet speculation about the article, without doing any sort of fact checking? That’s pretty bad, and I really can’t blame Snyder for suing.