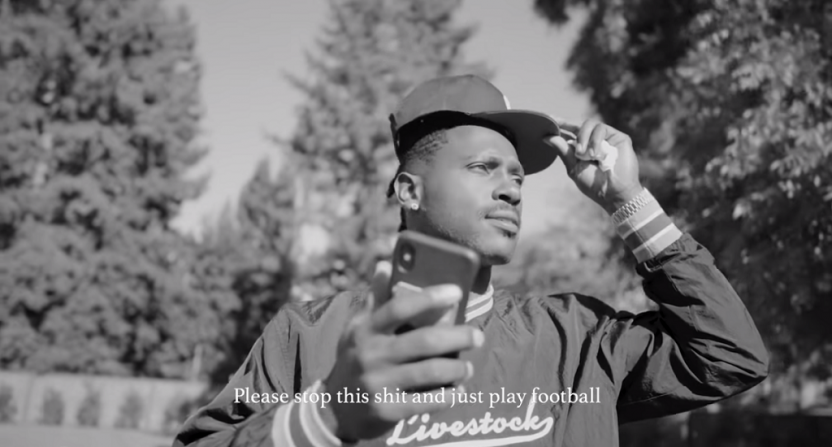 The situation between Antonio Brown and the Oakland Raiders continues to somehow only get weirder.

On Thursday, reports were that the Raiders would suspend Brown after he got into it with the organization’s general manager, Mike Mayock. Then came reports that his time with the Raiders could be over.

But on Friday, Brown reportedly delivered an emotional apology at a team meeting. And then Raiders head coach Jon Gruden said that Brown will play in the team’s season opener against the Denver Broncos after all. Things seemed to finally be moving forward! But that was followed by ESPN’s Ed Werder reporting that Brown “has been fined” for the incident with Mayock, and “he’s not happy.”

And that report was followed by Brown posting a bizarre video on YouTube featuring a recorded phone call with Gruden.

“With all these false narratives antagonizing me, it’s time for me to control my own narrative. Show the world I’m not the bad guy. Show the world you can free yourself from the lies and become your own person. I am not just AB the football player, I am Antonio Brown, the person, who paved a way for himself to be in charge of his own life. Free me!”

Gruden: What the hell’s going on, man?

Brown: Just a villain all over the news, man.

Gruden: You’re not a villain. You’re just the most misunderstood fucking human being in my entire life that I’ve ever met. I mean, I brought you here because you’re my favorite guy. I’ve never seen a guy work harder. And I don’t know where you are in your life right now off the field. All I know is you got a lot of things going. There’s a lot of people that have an opinion about you. And whether it’d be good or bad, you’re in the spotlight all the time. Let me ask you this- do you want to be a Raider or not?

Brown: Man, I’ve been trying to be a Raider since day one. I’ve been fucking working my ass off harder than anyone. I don’t know why it’s a question of me being a Raider. It’s like- do you guys want me to be a Raider?

Brown: I’m more than just a football player, man. I’m a real person. It ain’t about the football; I know I can do that. I show you guys that on the daily. This is my life. Ain’t no more games.

Well, that’s certainly a different move. However, ESPN’s Chris Mortensen hears that Gruden was “truly amused” by the video, and thought it was “awesome.”

More on @AB84 You Tube video: Raiders source says Gruden was truly amused by it and even thought it was "awesome."
That's all. Next.

Yeah, sure. Expect like 12 more updates to this neverending saga in the next 24 hours.