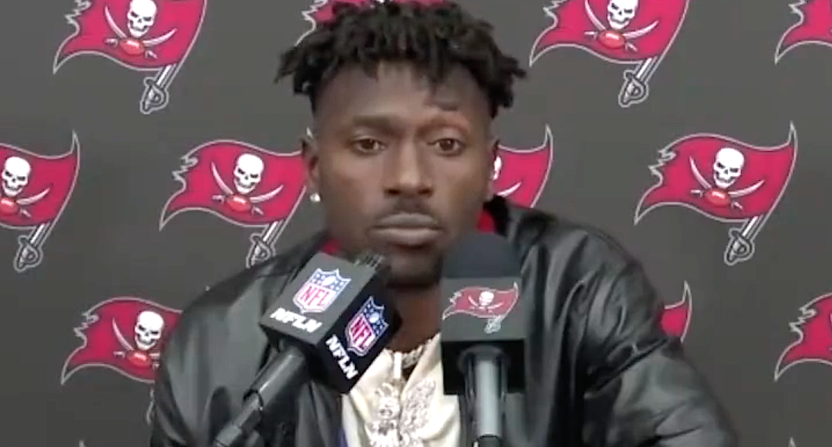 Antonio Brown returned to the Tampa Bay Buccaneers’ lineup for Week 16, catching 10 passes for 101 yards in a 32-6 victory over the Carolina Panthers. It was the receiver’s first game for the Bucs since Week 7, after missing five games with an ankle injury and the past three games due to a suspension for violating the NFL’s COVID-19 protocols.

During the Bucs’ postgame Zoom press conference, reporters wanted to ask Brown about returning from suspension. In particular, ESPN’s Jenna Laine wanted to know how Brown felt about Tampa Bay coach Bruce Arians standing by him after bring punished for using a fake card to misrepresent his vaccination status.

(Brown reportedly got vaccinated shortly after being informed that using a fake card could get him in trouble.)

However, Brown didn’t want to discuss his suspension, cutting off Laine and insisting that questions only concern the game versus the Panthers.

“Hey, Antonio — congrats. I know Coach Arians had told you when you came to this team, if you screw up one time, then you’re done,” said Laine. “And some people would deem what happened as a screw-up. But Coach Arians stood by your side and brought you back. Just what did it mean for you after being here for a year to have a coach–”

“Next question,” Brown interrupted. “Next question. We just wanna talk about this game. We don’t wanna waste time with you guys writing bogus…”

Laine countered by pointing out that reporters haven’t had an opportunity to talk to Brown during his absence. This was the first time he’s been available for questions. That didn’t persuade Brown otherwise, however.

Laine’s colleagues supported her by following up on her question. The Athletic’s Greg Auman continued to press Brown about the suspension, asking if he doubted whether or not he’d return to the team. Joey Knight of the Tampa Bay Times followed that by also asking about the suspension, but whether Brown was still recovering from his injury during his three-game absence.

It is completely within our rights, in our first time speaking to him since his suspension, to ask him about the events that led to his suspension. Nothing out of line there. Not all of you will understand that. https://t.co/Y2JE0mlekC

Whether Brown realized the press corps wasn’t going to let this go and relented, or he felt better about answering questions from male reporters, the embattled receiver continued to insist that the media was trying to bring him down and certain people tyring to take advantage of him.

So @JennaLaineESPN begins to ask Antonio Brown about the zero-tolerance policy he signed under, and Arians giving him another shot: "Next question. Next question. I just want to talk about this game. We don't wanna waste no time with you guys writing…"

Brown’s performance was certainly a topic for the postgame presser. He provided much-needed production for a suddenly thin Tampa Bay receiving corps. Chris Godwin suffered a season-ending knee injury in the Bucs’ Week 15 loss to the New Orleans Saints and Mike Evans sat out Sunday’s game with a hamstring injury.

Yet his return from suspension was undoubtedly a topic and reporters wanted to ask about it because they haven’t had an opportunity to do so in more than a month. This might have been their only chance to do with Brown, Arians, and other Bucs players and officials insisting that they’re ready to move forward.

I certainly meant no disrespect to @AB84 by asking him what it meant that Bruce Arians stood in his corner after what some would have considered a "screw up." He's allowed to answer how he feels. That's his right. But I can assure you, I care about honesty — not "drama."

If Antonio Brown wanted to talk solely about his 100-yard performance in today's game and not the suspension, he could have spoken to us any of the three days this week at the Bucs' facility, as we all put in requests to speak to him.

To be fair, neither of the reporters asked Brown about the details of the suspension itself and reportedly using a fake vaccine card. These were arguably football questions regarding the relationship between a player and coach, whether or not he’d jeopardized his role with the team, and if the time off allowed his ankle injury to fully heal.

Brown, the Buccaneers, and reporters covering the team will likely move on — on to New York (or New Jersey) where Tampa Bay will face the Jets in Week 17. The Bucs clinched a playoff spot and the NFC South with their win over the Panthers. One of the top two seeds in the NFC is also still possible during the final two weeks of the regular season. Brown will play an important role in that now that he’s back.