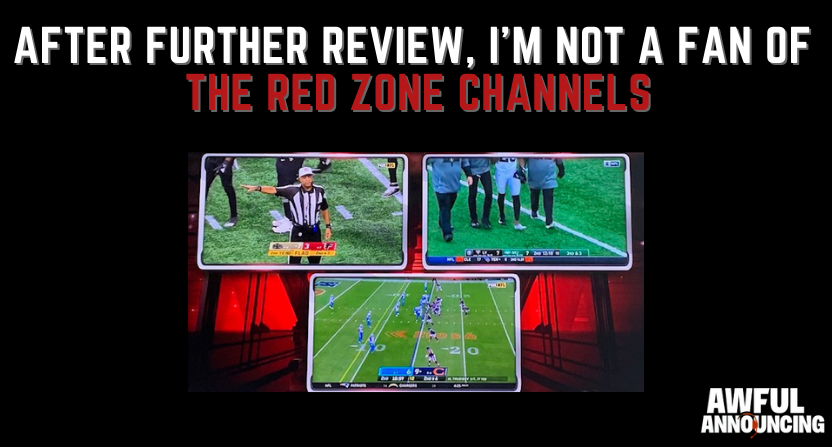 On an average weekend, you’ll find me parked in front of a 70-inch television, greedily consuming every ounce of football served to me. The first course is filled with Top 25 NCAA matchups and other delicious morsels, while the second consists of as many NFL games as I can gobble up. All told, this equates to around 20 hours of football every weekend, and is also why my legacy is shaping up to be a permanent ass print on a beige couch. I provide this insight into my football consumer habits to illustrate that I’m more than a casual fan; I’m a football junkie who plans her weekends around kickoff times and who once told a close friend, “Thank you for scheduling your wedding on our bye week” and sincerely meant it.

My love of all things football does not, however, extend to either version of the Red Zone channel, at least not any more. What once was my favorite way to watch has become less appealing over time. My football fandom began in 2009, but as my interest in the sport and my viewership have increased exponentially, watching Red Zone merely whets my football appetite instead of fully feeding me.

I know this opinion places me squarely in the minority. A cursory search of Twitter reveals a nationwide obsession with Red Zone that rivals the McRib. There are pages of appreciation posts, threats to cable providers involved in carrier disputes, and debates over which version of Red Zone is superior. I’m even outnumbered 3-1 with my regular Sunday football crew, a group that quite possibly loves Sunday Ticket Red Zone as much as their own parents. I haven’t even broached the subject of watching football in a different way; I know it’s a nonstarter.

I swear Scott is family. I love the red zone channel so much https://t.co/QyMXZL62AV

Don’t get this twisted- I don’t dislike the Red Zone channel, and this critique of its ‘shortcomings’ isn’t directed at any particular network or host (or Scott Hanson’s comically tiny desk). In fact, if you’re looking for a commercial-free viewing experience that provides a ton of excitement as well as the broad strokes of what’s going on around the league, the Red Zone stands alone. But for me, I’m at a place in my fan development where I want more than Red Zone can provide. As old and crotchety as this makes me sound, I prefer to watch the traditional way – with full-length live games, not whip around snippets – and I’d go so far as to argue that Red Zone’s passed Hors-d’Oeuvres-style coverage makes me a worse consumer of the sport. Here’s why. 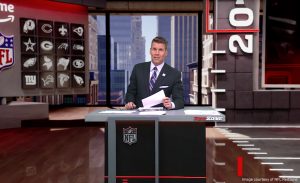 Why is this desk so tiny?

You Lose the Narrative

While Red Zone and scoring plays are important factors in any game, they represent only a fraction of the story. If your frame of reference is a handful of series taking place (primarily) within 20 yards of either end zone, you’re missing out on the natural progression of the game, interesting storylines, and the thousands of details that contribute to the eventual outcome. The announcers play an important role in keeping the audience apprised of notable statistics and streaks, waxing poetic on player development, and informing viewers exactly how many times Aaron Donald has nearly murdered someone today. These are all important pieces that contribute to the game’s ecosystem, and without them, the gameday experience feels incomplete. By contrast, Red Zone only fills in these gaps when there’s a scarcity of action elsewhere.

This is my biggest qualm with Red Zone: it’s too much information. Depending on the time of day, you could be watching 3-4 different games simultaneously and it’s tough to keep up.  This problem isn’t unique to my tiny goldfish brain either; research suggests that multitasking actually impedes information retention, which is why if you’ve watched Red Zone for a few hours, you may have trouble remembering who played whom and what the hell happened.

Watching the red zone channel all day: it’s like I’ve seen all the big plays, but I don’t remember a simple game’s score. 

The issue of games competing for your attention is most notable in the Sunday 1 p.m. ET slot, which is more populated, but even 1-2 games switching back and forth can be distracting. Additionally, the split screen naturally decreases the size of each game, which annoys me to no end when team colors are similar and I can’t figure out if the play I just saw was the Bills or the Giants. On top of that, the host can only provide commentary on one game at a time, and so if the ball is snapped around the same time in more than one game, it’s not immediately clear where you should be focusing your attention (side note: could they highlight one of the boxes to alleviate this?).

I much prefer to watch a smaller number of games, where I can pay more attention to each, and check twitter during commercials to keep up with big plays happening elsewhere. At a certain point in the day, my eyes and brain need a break from Red Zone because there aren’t any natural pauses for timeouts and commercials.

Aside from an ill-fated attempt at powderpuff my junior year of high school, which (of course) resulted in a high ankle sprain, I don’t have first-hand experience playing the sport. This puts me at a disadvantage in developing a true understanding of football. Sticking with one game (or, at least, full drives) allows me to focus on the X’s and O’s in a way that Red Zone wasn’t designed to do. I crave a deeper knowledge if I’m to intelligently discuss the game with others. Red Zone is exciting and something I like to have on in the background while doing some other activity, and it’s an outstanding medium when it comes to introducing newbies to the sport. But my constant quest to dig deeper and to understand more, is why Red Zone isn’t my preferred method of football consumption. 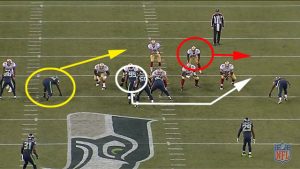 There isn’t a wrong way to watch football, but over the years I’ve found that Red Zone no longer sustains me. I want to focus my attention on one game not three or four; I desire a deeper understanding outside of scoring plays; I want to ask less and know more about the sport I love. Of course, I’ll continue to watch Red Zone on Sunday afternoons with my friends because it makes them happy, but I secretly look forward to Sunday nights when I can dig in to one football game and feel truly nourished.