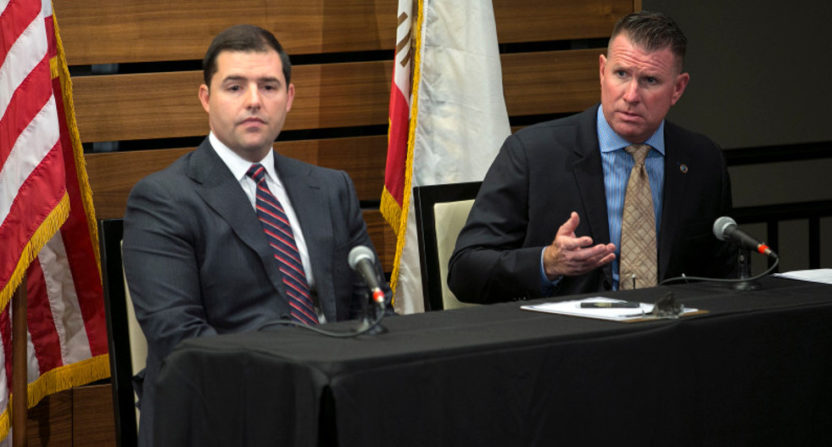 Much of the conversation around NFL protests started with the San Francisco 49ers, and with the protests from Colin Kaepernick and Eric Reid. Since then, the 49ers’ organization has been pushing to try and address some of the issues between police and communities worried about police violence, sponsoring a community forum on the topic in San Jose and donating $1 million to “the cause of improving racial and economic inequality and fostering communication and collaboration between law enforcement and the communities they serve here in the Bay Area.” They’ve now taken some interesting new steps, signing a pledge Wednesday with representatives of police unions from San Jose, Oakland, Santa Clara, New York, Los Angeles, Sacramento, Long Beach and Portland to “ease police-community acrimony,” pledging another $500,000 for an outreach campaign that includes public-service announcements toward that goal, and joining with the unions to call for gun control restrictions in the wake of the Las Vegas shootings.

49ers CEO Jed York (left above) and Sgt. Paul Kelly (right above), president of the San Jose Police Officers’ Association, were two of the speakers Thursday. York in particular had a lot to say about the issues of gun control. Here’s more on that part from Robert Salonga of the San Jose Mercury News:

Now they’re trying to set the league’s moral compass once again, this time partnering with big-city police unions to back rising gun-control measures, particularly with the “bump stocks” that significantly boosted the killing power of the shooter in the Las Vegas massacre earlier this month.

“It seems insane to me that a citizen can buy something like that,” CEO Jed York said at a news conference Thursday. “I’m not anti-Second Amendment, this is something that is common sense.”

…Much of the news conference at Levi’s Stadium on Thursday rallied behind proposed federal legislation to ban the bump stocks as well as advocating the outlawing of armor-piercing bullets and gun silencers that the unions contend are a significant threat to law enforcement.

Robert Harris, secretary of the Los Angeles Police Protective League, stressed that his colleagues were not trying to obstruct gun rights.

“We are unwavering in our support of the Second Amendment. We also believe that common sense laws should be put into place to protect law-enforcement officers and the citizens they serve,” Harris said. “If as a country we hope to make any progress, it will take all of us to leave our comfort zones.”

That seems like somewhat of a shift, and a long way from the initial protests questioning violence by police officers against civilians. And teaming up with police unions and talking about gun control being necessary to protect police officers isn’t necessarily going to win the 49ers fans from those who supported these protests. But that’s not the entirety of this agreement; the elements focused on easing police-community acrimony may be even more notable, and the pledge of money for ads on that front could be pretty significant. (Perhaps even some that air on NFL games.) And Reid had some positive comments about this partnership overall:

“I wouldn’t say that our protest led to this. But it is encouraging that the NFL, and in particular our team, stepped up to the plate,” Reid said. “These are serious issues, people losing their lives. If we have a way to eliminate that and stop that loss of life, we need to do it.”

Still, he said, the anthem protests will continue.

“Until we get something written in stone or the NFL makes us feel they’re going to take over our platform for raising awareness around systemic oppression, then we’re going to continue to kneel. But I think we’re on the right track,” Reid said.

We’ll see what this actually leads to and how it goes over, but it’s possible we could see 49ers-funded ads focused on improving those police-community relationships in the near future. And as Reid noted, it is refreshing to see a team working to address some of the concerns its players have mentioned. We’ll see what this pledge and partnership winds up doing.