Hemal Jhaveri, who served as USA Today’s race and inclusion editor, said in a recent Medium post that she has been fired after tweeting about the suspect in the Boulder, Colorado supermarket shooting that claimed ten lives last week.

Per her post, Jhaveri spent almost eight years with the company, rising from social media editor to columnist and eventually the role she held until last week. For The Win, Overseeing USA Today’s sports and social news site, was a major part of her role.

Following the news of the shooting, Jhaveri tweeted (her Twitterfeed is now private), “it’s always an angry white man. always.” “Extremely tired of people’s lives depending on whether a white man with an AR-15 is having a good day or not,” she added in another tweet, in reference to the Atlanta shooting the week prior that saw a white assailant kill eight people, including six Asian women.

When it was revealed that the shooter in Boulder was not a white man, Jhaveri apologized and deleted her tweet, noting in the Medium post that it had not been the right thing to do.

“It was a careless error of judgment, sent at a heated time, that doesn’t represent my commitment to racial equality,” said Jhaveri. “I regret sending it. I apologized and deleted the tweet.” 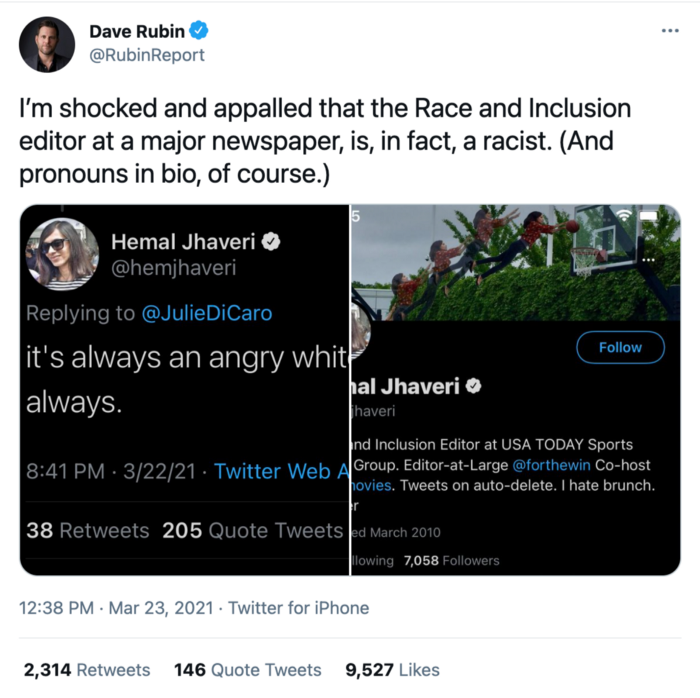 That wasn’t enough to satisfy critics, who, in Jhaveri’s words, came from the world of alt-right Twitter, claiming she was a “racist” regarding white men, which was at odds with her professional title. The outrage even reached Fox News and other major conservative outlets.

As the outrage and threats toward both her and USA Today grew louder, the media organization “relieved me of my position as a Race and Inclusion editor,” per Jhaveri.

Perhaps that’s where the story might have ended normally, but in Jhaveri’s Medium post, she outlines a series of issues and situations that she had to deal with in the USA Today newsroom that made her uncomfortable and cast a sense of racial insensitivity across the company.

Like many BIPOC writers in newsrooms I’ve also dealt with the constant micro-aggressions and outright racist remarks from the majority white staff.

On two separate occasions, I was asked to edit a piece on young black golfers, but warned not to use language that would alienate white audiences. In my first meeting with a new manager in the Sports Media Group, he interrupted as I was informing him about my qualifications and asked, “Actually, can you tell me where you’re originally from?”

There’s also the USA TODAY Sports editor, who, upon learning his daughter was going to marry an Indian man, only spoke to me to ask questions about what it was like to be Indian, never about my actual beat as an NHL writer. Then there’s the standards and ethics meeting I attended, where an editor argued it was OK to deadname transgender people.

Those accusations are at odds with the purported mission of Jhaveri’s role as race and inclusion editor and the assumption that USA Today would want to hold itself to the standards of inclusivity. Especially as Jhaveri was penning articles for FTW involving Oral Roberts University’s anti-LGBTQ+ policy, everything about Barstool Sports, and racial issues surrounding the NHL.

In 2019 USA Today reporters looked into blackface. They found their EIC published blackface photos in college. The EIC apologized, kept her job, even judged the Pulitzers that year.

In 2021 Hemal Jhaveri tweeted about white men being mass shooters. She apologized. And was fired.

Jhaveri closes her post with a scathing takedown of USA Today’s newsroom and what she says are the double standards that led to her being fired following a tweet while others have kept their jobs despite doing things far more damaging.

USA TODAY, like so many other newsrooms, has been vocal about trumpeting its commitment to diversity, equality, and inclusion. And yet, doing the actual work of diversity, equality and inclusion necessitate engaging with complicated structural issues that should make white audiences uncomfortable. In this case, after I made one mistake, the company contradicted their commitment to DEI and wilted upon criticism.

…We’re never going to see real change in newsrooms unless editors allow for their writers, and BIPOC writers specifically, to freely critique white structural relations. The fact that many newsrooms still view that as “bias” is a saddening and dispiriting fact.

Like many places, USA TODAY values “equality and inclusion,” but only as long as it knows its rightful place, which is subservient to white authority.

Gannett, which publishes USA Today, told CNN Business that it holds its “employees accountable” to the principles of “diversity, equity, and inclusion.”

“While we can’t discuss personnel matters and don’t want to comment on the specifics of her statements on Medium, we firmly believe in and stand by our principles of diversity and inclusion,” said a spokesperson.