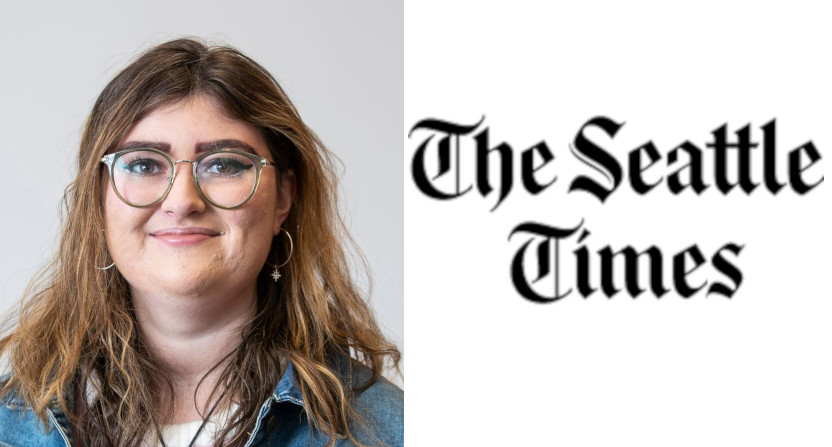 It’s not at all unsurprising to see a clause that a new-to-a-paper reporter can be terminated at any point during a probationary period, but it is definitely surprising to see one of those clauses actually used. But that’s what appears to have happened with The Seattle Times and Marisa Ingemi. The Times brought in rafts of favorable publicity when they hired Ingemi, long a leading women’s and men’s hockey reporter at The Boston Herald and on a freelance basis (which included several pieces for The New York Times), last summer as a new beat writer for the Seattle Kraken. But they apparently made the decision on Jan. 28 to fire her, and that came to the attention of the public Wednesday when the paper’s sports editor Paul Barrett posted her job, and when Ingemi later tweeted that she had been fired:

On Jan. 28, I was fired by The Seattle Times without warning. I’m shocked and disappointed and wish I had more answers. I have much more to say and hopefully will be back writing soon.

The Pacific Northwest Newspaper Guild, a union that represents many Times staffers, put out a lot of tweets about this, and how many of their members have signed a petition opposing this move:

Marisa had two weeks until the end of her six-month probationary period, during which our contract states employees can be fired without notice and are not eligible to file a grievance. This language, unfortunately, limited the action Marisa or the Guild could have taken.

Our members deserve transparency in disciplinary action, as well as a commitment by the company to just cause proceedings for all employees. We will fight to improve this contract language in our next negotiations. Thank you to our members who stood with @Marisa_ingemi.

Ingemi later spoke to Defector’s Kelsey McKinney, who also added information on how Ingemi’s Times colleagues learned of this:

Ingemi was fired on Jan. 28. Multiple Times sources told Defector that an email went out newsroom supervisors that day, saying that Ingemi was leaving the paper. The details about Ingemi’s departure, however, were kept vague. Reporters were relayed this information, if they given any information at all, by their supervisors. One said they assumed Ingemi left for a better job. Another said she didn’t know Ingemi had left until she later learned about a petition being signed by newsroom staffers regarding what had happened.

The firing came as a surprise to Ingemi, the newsroom, and the Pacific Northwest Newspaper Guild, which represents reporters. Ingemi, who had been hired less than six months ago, told Defector she was “shocked.” Ingemi was fired after she had been approved to book travel in February for covering the team. It also leaves the paper’s sports desk with only one other woman writer on staff.

“I just want people to know that I was not warned about this and I didn’t do anything wrong,” Ingemi said. “If there was legitimately a problem, I wish they would have told me that. I would have taken it very seriously and my track record shows that. To this very moment, I do not know what I did to cause being fired.”

Ingemi later added: “I loved my job and every single day I was the happiest person in the world getting to cover the Kraken. And every day I miss it deeply.”

At this point, it is unclear what the Times is citing as its rationale for terminating Ingemi’s contract. We’ll update if we receive a statement from them. As of now, though, there appears to be nothing they’ve said publicly about this.

On many levels, it seems foolish for the Times to do this. First off, they brought Ingemi in from across the country for this job. They hired a person who was already well-known as a hockey reporter, and they certainly reaped the traffic benefits of that versus hiring an unknown figure. Many people nationally have read Times stories about the Kraken (a woeful 15-27-4 this season, by far the worst in the NHL’s Pacific Division) because of Ingemi writing them and tweeting them out; that’s far in excess of the interest anyone would normally have in a basement-dwelling expansion team. And that would likely not be the case if the Times had hired someone who wasn’t as known.

And while firing Ingemi before her probationary period ended limited the union’s ability to formally intervene, it did not limit their ability to create a stink about this. And the Times‘ firing of Ingemi while she was still on her probationary period, and without a clear and obvious offense, certainly should raise some questions amongst those who might have otherwise considered applying for this job. It will definitely diminish the pool of applicants they get for this position.

There’s much that remains to be determined on exactly what went down here. But the Times‘ actions to date are not impressive, and they are not suggestive that anyone else should go work for them. If they’re willing to fire a nationally-known and nationally-published figure who was drawing solid traffic for them in coverage of a terrible team, and to do so without an obvious (or even a stated) rationale, it raises questions of how they’ll treat their employees more generally. And it certainly doesn’t say much about them as a good outlet to work for.