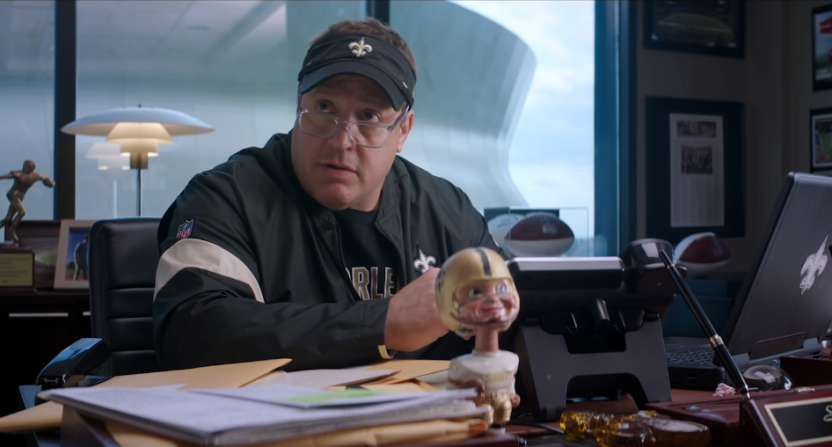 The footage must exist. Somewhere at Netflix headquarters there’s video evidence of the pitch meeting for Home Team. Would love to see the look on executives’ faces when the Happy Madison production team first unveiled the idea of turning the aftermath of BountyGate into a family movie. You remember the scandal- the New Orleans Saints paid bonuses for intentionally injuring opposing players. Even for a violent sport that was out of bounds. There were suspensions, fines, and forfeited draft picks.

It’s the height of hubris that this film exists on their platform. But Netflix has long prioritized quantity over quality. Maybe the joke is on us, because Home Team is already a success as one of Netflix’s top-10 movies in the United States. But in many ways, Home Team represents everything its detractors hate: a lot of money and resources wasted on lousy art.

Home Team could have dug into the contradictions and complications of professional sports. High stakes sometimes lead to unethical choices. Instead, we get the tale of what happened after Payton was suspended for the 2012 season. The Super Bowl-winning coach spent his year away from the NFL in Texas being an assistant for his sixth-grade son’s youth football team.

This is the part of the story that Home Team focuses on: a disgraced coach trying to reconnect with his son. That’s fine. And if the movie put in just a little more effort, this might have been a decent watch.

However, almost every adult is as multi-dimensional as a cardboard cutout. Nobody seems particularly interesting. James spends most of his time wearing Saints gear as if he needs to constantly remind the audience that he’s Sean Payton, even though he looks nothing like Payton. James tries to channel a clichéd tough-guy image. But he fails, and looks bored and pissed off throughout most of his scenes. You’d never believe he was a coach, at any level.

James is best known for his comedic chops. He plays it straight here, much to the detriment of the movie. The film doesn’t give him anything amusing to do. In one potentially promising scene, a player’s frisky mother lures him to a romantic home-cooked dinner. It’s awkward and could have been legit hilarious, but that storyline is quickly abandoned. There’s never any callback so the entire moment is superfluous. There are too many moments that do nothing but fill up runtime.

Even when Home Team tries to tug at heartstrings, James’ acting falls short. In one confrontation with his son, he isn’t convincing at all. Tait Blum, who plays Connor, delivers his lines with an emotional tone that James simply cannot match. James sounds like he’s reading a menu.

While James is dull, the movie does him no favors with his supporting cast. Instead of character development, we get too many oddball characters. The worst of the bunch is Rob Schneider, who seemingly is contracted to appear in every Happy Madison production. As per usual, Schneider plays a weirdo. This time he’s a new-age stepdad weirdo. We’re unfortunately introduced to him sharing a Snuggie with Payton’s ex-wife at a football game. That’s a joke straight out of 2008. Then there are other lame references to vegan ice cream and yoga.

Everything about Home Team can be summed up with the projectile vomiting scene. Instead of something witty, thoughtful, or endearing, co-directors Charles Kinnane and Daniel Kinnane take the easy way out with toilet humor. Now, if done right, gross can work, but it’s just gross for the sake of grossness.

Is there anything good? Coach Troy Lambert (Taylor Lautner) is okay, and the kids are decent, especially Blum. But Home Team is the worst kind of bad movie because it’s not interesting enough to poke fun at. A joyless one-hour, 38-minute experience that’s best forgotten and never spoken of again.

There’s a joke about how Sandler makes movies to simply get paid for hanging out with relatives and friends. Home Team only reinforces that because his wife, daughter, and nephew are all in this. Sandler has created a family business and is laughing all the way to the bank, even if we’re not.