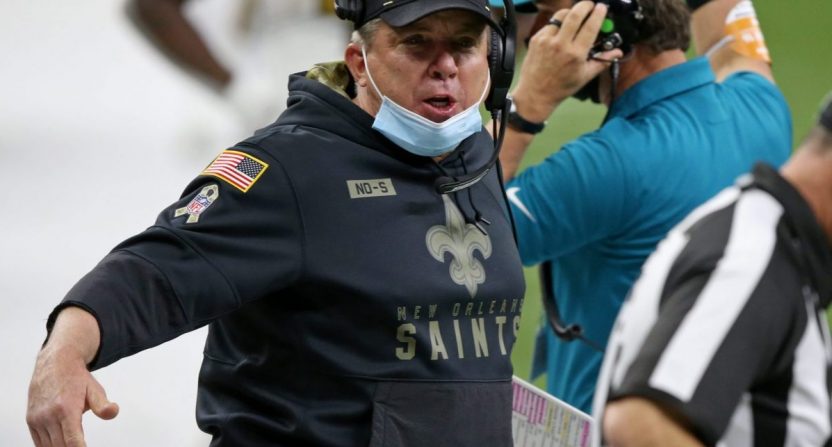 Everyone at some point has probably considered which actor they’d want to portray them in a movie.

Few people actually get to see that played out in reality, though. Being famous in sports for any reason helps increase that likelihood, of course, but even then, there are plenty of high-level athletes and coaches who haven’t gotten the Hollywood treatment. We can now cross one name off the “never been cast” list, though: New Orleans Saints coach Sean Payton.

Thanks to Netflix and Happy Madison, we’re getting Home Team, a film based on the aftermath of the infamous Bountygate scandal. And thanks to Peter King’s Football Morning in America column, we know who will be playing Payton: Kevin James.

Via King at Pro Football Talk:

Uh, Kevin James the actor? That’s right. James is going to play Sean Payton in a Netflix movie called “Home Team,” produced by Happy Madison Productions. (Sound familiar? It’s the Adam Sandler company.) Imagine this: The plotline begins in 2012, when Payton is suspended for the season by commissioner Roger Goodell for the Saints’ bounty scandal, which gives Payton the chance to re-assess his life and put it in some perspective. As part of his new life, Payton becomes the offensive coach for his son Connor’s sixth-grade football team, the Warriors, in the Dallas area. (Thus, the “Home Team” title of the flick.) Filming of the movie begins this year. Payton read the script recently, made some corrections, and here it comes. My one thought about casting: James is going to need to lose a few pounds to play Payton.

With Payton still in charge of the Saints in 2021, it’s kind of wild thinking about how he was suspended for an entire season over the scandal. It’s definitely a decent template for a film, albeit with major echoes of the original Mighty Ducks movie (life imitating art), and the Kevin James casting makes sense for the tone they’ll almost certainly be going for. (It’s Happy Madison. Paul Thomas Anderson wasn’t lining up for this project.)

Of course, a Happy Madison comedy about the aftermath of a suspension in which Payton at least passively presided over a system designed to financially reward players for injuring opponents would seem to have some tonal issues. Fortunately Payton himself was able to take a swing at the script; between his notes and the wide range of a talent like Kevin James, surely Home Team will be a big win with critics and audiences alike.