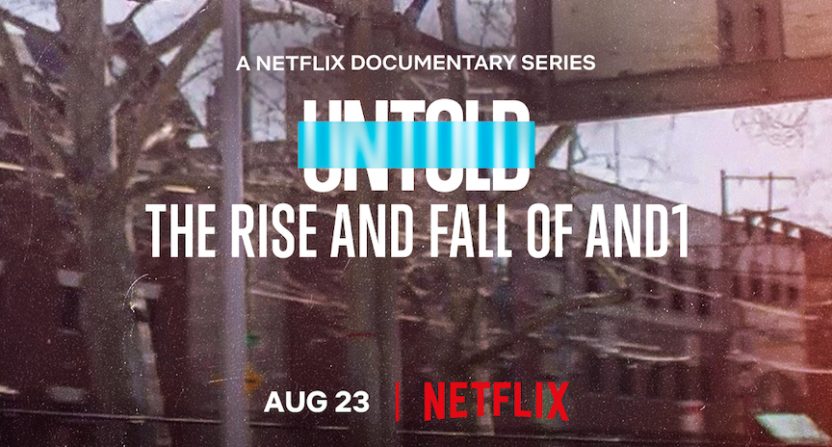 Before the Big3, before Slamball, there was AND1. A basketball revolution was built on a grassroots effort, fueled by sheer creativity. Sure, it was packaged and marketed because it was a business. Clothing and sneakers were what they were selling. But a lot of companies make athletic gear. AND1 dared to be different, highlighting unique artistry.

How did something so popular in the 1990s and 2000s suddenly disappear? Kevin Wilson Jr. delves into what happened to the brand in the latest episode of Netflix’s Untold documentary series, The Rise and Fall of AND1.

Young people make things cool, and few things were cooler than AND1. Colorful styles, colorful players, colorful names with colorful games: Skip 2 My Lou, Hot Sauce. Half Man Half Amazing, The Professor, Escalade, Main Event, etc. AND1 was so big that it was televised by ESPN and on the cover of Sports Illustrated. It even had its own video game. The AND1 Mixtape Tour was international, drawing sellout crowds. NBA players and celebrities came to watch them perform.

What AND1 realized before virtually anyone else is that basketball didn’t have to be just about what teams won or lost. It could be about individuals. Who had the best handles, fanciest passes, the most tricks? There was a generation of fans starving for this kind of basketball. Not necessarily the type of family-fun entertainment made famous by the Harlem Globetrotters. But something with a little more flair, more edge.  In the early days, if you were lucky enough to live in a big city, you might see this kind of basketball at venues like New York City’s Rucker Park.

But what if you didn’t reside in NYC? This documentary explains how AND1 brought the streetballers to you. What makes this story fascinating is that it’s not like this was the company mantra from the start. Co-founders Seth Berger and Jay Coen Gilbert were creating and selling products. The streetballers were the brand ambassadors.

Hiring relative unknowns wasn’t their first choice. The Rise and Fall of AND1 illuminates details that some might have forgotten. The story about how they hoped Stephon Marbury would do for AND1 what Michael Jordan did for Nike might be worth a standalone documentary. It seems ridiculous in hindsight. But at the time, Marbury, the fourth overall pick in the 1996 draft by the Minnesota Timberwolves, was a huge star. He was famous before he played college for one season at Georgia Tech.

After the partnership with Marbury fell through, AND1 went in a different direction.

The Rise and Fall of AND1 is at its best telling the stories of the streetballers. Skip 2 My Lou, Hot Sauce, and The Professor get a lot of airtime. However, some AND1 fans might be disappointed that Escalade is barely acknowledged. The late Troy Jackson, aka Escalade, was the younger brother of ESPN/ABC NBA analyst Mark Jackson. At 6-foot-10, 375 pounds, Escalade looked different from his AND1 teammates. But Jackson, who passed away in 2011, possessed skills and flair that made him a fan favorite.

AND1 had dreams of taking on Nike, and for a while, it was widely successful with the younger demographic. However, The Rise and Fall of AND1 explains some of the difficulties of battling a foe with infinite resources. Money was also a point of contention within AND1, as the streetballers bickered amongst themselves and with management.

It’s hard to unravel the truth because the arguments remain he-said, he-said situations. These internal struggles contributed to the eventual sale and downfall of AND1. The brand still exists but is a shadow of what it once was.

What is the legacy of AND1? Its most successful alum was Skip 2 My Lou whose real name is Rafer Alston. Alston played for several years in the NBA and was a member of the Orlando Magic team that reached the 2009 NBA Finals.

The streetballers interviewed for this documentary believe that they significantly impacted the way pro basketball is played today. The NBA has certainly evolved into a more wide-open, aesthetically pleasing game. How much AND1 had to do with that seems debatable.

What is undeniable is that for a moment in time, these streetballers were kings.

The Professor is still teaching lessons ?