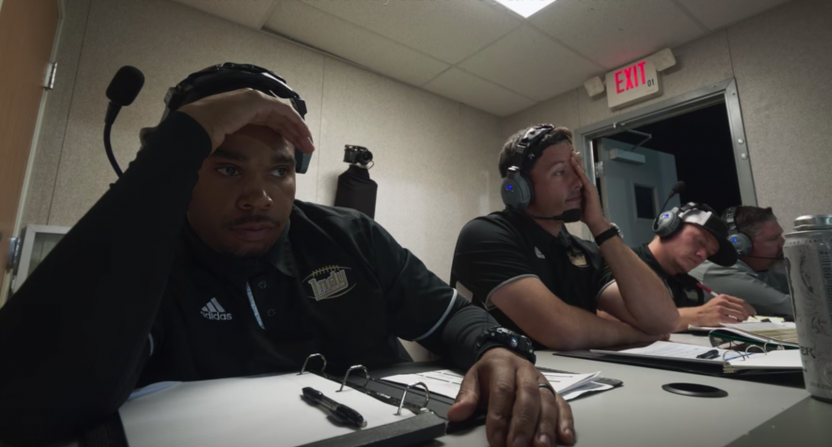 One of the unifying traits across the first three seasons of Last Chance U was that the team in question was chasing a championship. The individual backstories of the coaches, players, their families, and the various school employees were certainly the main course, but the tantalizing allure of a national championship was the special sauce that exponentially added to the ongoing intrigue of each season. Netflix thought they had that going into their second season following Independence Community College after a top five finish the season before. It definitely did NOT work out that way.

Opening the year in the top five, all seems going to be plan after two episodes. And while other seasons have seen some stumbles, tough games, and academic and locker room issues, the total collapse of ICC’s football program is a dramatic departure for the series. But does that necessarily deteriorate the quality of the content?

With the loss of Brittany Wagner in the show’s move to Independence and no academic role equivalent at ICC, the show already lost a bit of luster as the academic peril the players struggle with lost a comprehensive and charismatic point of view. While the implosion of ICC is a compelling slow burn that presents its own unique flavor of bingeworthy programming, it’s hard to say it’s not a step down from the championship pursuits of the past three seasons.

The show pivots from staples of the last three seasons where viewers are focused in on questions like: Can they do it? Will they make the grades? Will they get scholarship offers? And now are focused on questions such as: Who is at fault? How did this happen? Who is getting fired? Who is going to quit? And from a broader standpoint: Is football even good for ICC and the city of Independence?

As always, the direction of the series is pretty stellar and consistent. We’re given an honest and fair front row seat through it all. Players and coaches are not made into caricatures of being a very simple good, bad, or other label. One of the best things about Last Chance U is that nothing is simplified and complex characters and issues are presented as such for the viewer to sort out on their own.

Viewers will watch in suspense wondering when the Pirates will hit bottom, almost like a person with their hand out looking for a wall in a dark room. That’s ultimately wishful thinking as the team is unable to sort through some toxic blend of bad coaching, bad quarterback play, bad culture, and simply bad luck. Emotions boil over, players quit, players are kicked off the team, coaches resign and/or are fired, and ultimately redemption never really comes for the Pirates (Things got way worse after the season wrapped).

Last Chance U has thrived by telling complicated stories of personal redemption tied together by the pursuit of group success. When there isn’t any group success, cohesion, and camaraderie, those personal redemption stories lose a lot of momentum and purpose. In simpler terms, as things unravel, the happy endings we’re accustomed to for many individuals become much more dire and scarce. The decline of protagonists that deliver some amount of a happy ending is ultimately why this season will be the most challenging for viewers. We do get some glimmers of hope and life goes on for many of the characters, but we also get a much higher dosage of seeing people crushed whether it’s being kicked off the team, fired, or unable to academically continue their playing careers.

That’s real life and Last Chance U has always thrived by not veering off course from the realities of JUCO football, but the outcome, tone, and sentiment of this season is such a dramatic departure that many viewers may not have the stomach to invest 8 hours into such an unflinching reality check.

Personally, I didn’t mind ICC’s struggles and enjoyed a lot of the soul searching showcased in the series. Ultimately though the wallowing, finger pointing, and frustration just didn’t surface as much character development, growth, and introspection as the more balanced and positive seasons before. While the side effects of losing are certainly a story worth telling, it’s a tougher watch regardless of how well that story is told. Given the quality of the show has seemingly had incremental decline since the first season, it will be interesting to see if Netflix sees a path forward for the show to continue or ultimately becomes another casualty to ICC’s abysmal year.