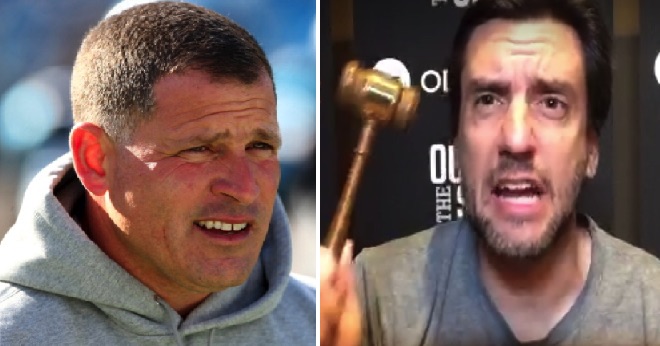 A social media campaign – purporting to be about Greg Schiano’s involvement with the Jerry Sandusky scandal – derailed the potential hire within hours and before the parties could complete the paperwork. That social media campaign was spurred on by Tennessee fan and noted media bete noire Clay Travis.

As with many of Clay Travis’ campaigns, there’s an element of truth. He took it farther than most would.

Media members with friendly relationships are all in on Greg Schiano. Fans aren’t. Schiano was bound to be an underwhelming and unpopular hire at Tennessee. In the past decade, Lane Kiffin burned Tennessee fans by leaving after one season. They endured Derek Dooley’s systematic unraveling of the program for the next three years. Fans chased that with the acute disappointment of the Butch Jones era.

Schiano did an excellent job at Rutgers. His time in the NFL at Tampa Bay was a disaster. It’s not clear how much that NFL stink should be relevant for college programs. But it was. That stink, plus Schiano’s purported self-estimation, kept him out of football for two years after the Bucs fired him. He ended up coming back as an assistant in college. Rutgers, now in the Big Ten in large part because of his labor, did not re-hire him.

The people from Tennessee killing the Greg Schiano hire should take a peek at Rutgers since he left. Just saying …

There’s no doubt Schiano warranted another college head coaching opportunity. But Tennessee fans, who have seen their program be a perennial top 10 team and win a national title in recent enough memory, think their program is above him. Second choice at best? Strong recruiter? Success at a lower level? Questionable in-game head coaching ability? That sounds a lot like settling for another Butch Jones.

The one thing Tennessee was in no position to do with this hire was settle with another Butch Jones. That Tennessee leaders even thought this hire would go down smoothly from a football perspective, after all that has happened, says a lot.

Schiano, moreover, does have some baggage from his time as a Penn State assistant. Court documents, released last year, showed Mike McQueary testifying that Tom Bradley told him Schiano had witnessed a similar incident with Jerry Sandusky and a boy in the shower in the early 1990s. Schiano all but no commented when the initial scandal broke in 2011. When his involvement became an issue in 2016, he denied involvement to a reporter, not under oath.

In response to deposition, Greg Schiano said: “I never saw any abuse, nor had reason to suspect any abuse, during my time at Penn State.”

There’s no proof of wrongdoing, legally or morally, on Schiano’s part. It was not enough for Ohio State to be pressured to cut ties with him. But that is a question Tennessee or another school would investigate and want clarification about before hiring him. It’s reasonable that Tennessee would or should have a particular interest in having a coach with a clean track record after the football program’s recent handling of a sexual assault scandal.

It’s also clear that both concerns were means for Travis and others to subvert a suboptimal football outcome. He has lamented social media mob mentality in the past. He helped push it along.

Greg Schiano knew about child rape at Penn State and kept quiet according to court testimony. Disgraceful of Vols: https://t.co/co4v7E9VYa

Travis interjecting himself should be no surprise to his seasoned observers. One can accuse Clay of many things. Being stupid is not one of them. No qualities are more important for media success in media right now than being able to read your audience, to recognize the hot-button issues that move them, and to interject yourself into that conversation in a way that is bold and interesting.

Travis is less demure about that than Paul Finebaum, for instance. Though Finebaum, with decades of accrued credibility and the ESPN imprimatur, is not an upstart. Neither is Howard Stern anymore. The question for Travis is how to reach that level in 2017 and do so independently. The major sticking point for many with Travis is he has fewer scruples when the conversation moves to politics, gender, and race (or he is willing to feign not having them for effect and personal gain).

I’m a multimillionaire and I write and talk about sports for a living. If only everyone could be this miserable. https://t.co/Pd3gnLB5oe

Critics of Travis will come out of the woodwork. Their colleagues will support them. But Travis recognizes that will happen. He relies on it to build his brand. Most of those critics won’t be in media as long as Travis is and will have a much harder time supporting their families while doing so. If there were tangible value in scruples, Travis would have them.

Many media members will find the primacy of perception, the discordance between it and truth, and the swiftness with which it created a fait accompli for Tennessee with Greg Schiano jarring. Those media members aren’t paying attention to what’s happening in the rest of the world and their industry. They are paying far less attention than Clay Travis.