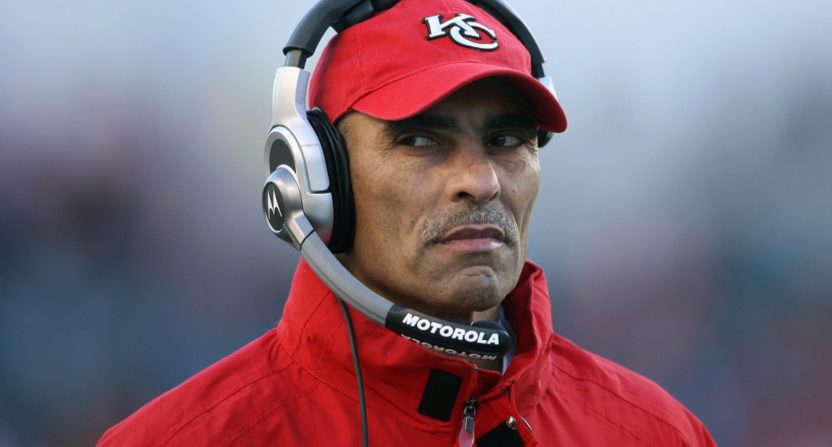 The “Herm Edwards to Arizona State” smoke kicked up yesterday, seemingly out of nowhere. Edwards, 63, hasn’t coached since being fired by the Chiefs in 2009, and hasn’t coached in college since 1989, when he was the defensive backs coach at San Jose State.

Edwards has served as an ESPN analyst in the interim, and though normally it makes all the sense in the world to head to Tempe, the fit here seems a bit odd.

Edwards (who had reportedly been serving as sounding boards for Anderson during the coaching search, in addition to his former NFL colleague Tony Dungy) fits the Sun Devils’ stated decision for someone with previous coaching experience, and he would provide the splash Anderson is reportedly looking for.

But this is the same Herm Edwards who has not coached in nearly a decade. The same one whose only college experience came as defensive backs coach at San Diego State in the late 1980s. The same one who was fired from three NFL jobs thanks to a 54-74 overall record and who has since spent his time talking about pro football in a studio.

Despite the somewhat difficult fit, according to reports, Edwards is set to take over the Sundevils program.

Former NFL coach and current ESPN analyst Herm Edwards is in line to become Arizona State’s next coach, pending approval of the university president, according to multiple reports.

The Associated Press, citing a person with direct knowledge of the plan, reported Wednesday night that Edwards’ deal and an official announcement from Arizona State are still being finalized.

Edwards, 63, emerged as a serious candidate for the job on Tuesday. He has yet to be interviewed by the university. Arizona State president Michael Crow, who is needed to sign off on the deal, is expected to return from a trip to China by week’s end.

Here’s another piece to the puzzle:

Asked about the opportunity on Wednesday on SportsCenter, Edwards said, “It has to be the right fit. Coaching is about fits. And this is a place where [Arizona State athletic director] Ray Anderson is there; I know the man, we have the same kind of philosophy on things we want to do. So I’m going to go down there and have a conversation and see what happens.”

Anderson represented Edwards during his days as an agent.

Is this kind of funny? Yes! Absolutely.

But is it completely ridiculous?

Well, yeah, probably, but if you want the positives, they’re not too hard to find. Being a college football coach is mostly about finding the right staff, delegating, connecting with boosters and recruits, and essentially serving as a CEO. Edwards might be awful at all of those things, of course, but it’s not out of the realm of possibility that he’ll succeed at those things!

After all, many of those skills are derived more from experience in similar roles, and Edwards does have a lengthy NFL head coaching resume. Plus, honestly, it’s nice to see a non-white candidate get at job, something that should happen more often.

Still, this happened so quickly and under the shadow of the dumpster fire that is the Tennessee search that there’s going to be a moment next fall when someone turns on the TV and sees Herm Edwards coaching against Mike Leach late on a Saturday night, and it’s going to be a surprise.

Also this is funny: