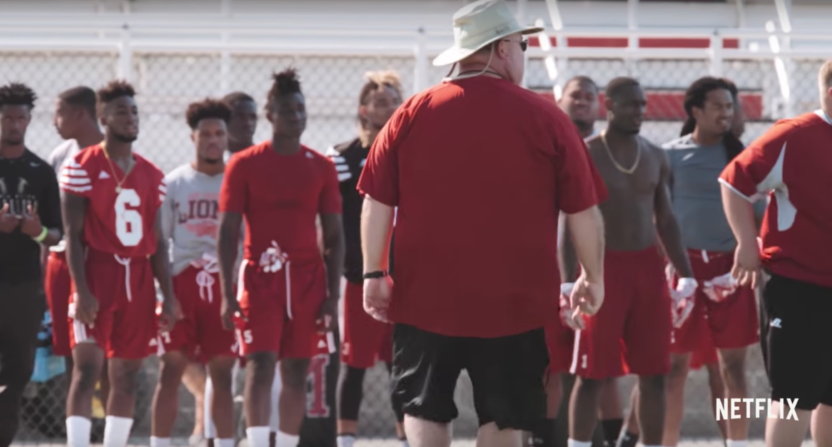 Last Chance U is the creation of Emmy-nominated documentarian Greg Whiteley, who over the past decade has directed films on a range of subjects, including the history of American education and Mitt Romney’s presidential campaigns. After watching the gripping new season of Last Chance U, Awful Announcing hopped on the phone with Whiteley to discuss the differences between the first and second season, the challenges of filming tense moments on the sidelines and the crew’s dynamic with bombastic (and sometimes boorish) EMCC coach Buddy Stephens.

Awful Announcing: Shooting the first season, I imagine you caught some of the players and coaches off guard, with them not quite knowing what they had signed up for. How was it different going about this season with everyone involved knowing what the final product would look like and how many people would see it?

AA: Clearly you got a little lucky in Season One with some crazy drama that would have been impossible to foresee. Were you worried the storylines wouldn’t come together as well in Season Two?

GW: I worry about that in every season of anything I’ve ever shot. We show up with our cameras, and we try to do the best job that we can of putting ourselves in the right place at the right time, but you never know if these stories are going to come together.

I’ve learned over time that if we’re given enough access and enough time, something always comes together. So while I have that anxiety. I think that anxiety is good in that in just sharpens us as a film crew to hustle and to worry, and that causes us to stretch a little bit longer and reach a little bit further to find what those stories might be. Especially a place like East Mississippi where you have very high stakes, with characters that are easy to root for, you’re almost always guaranteed something is going to come through for you that will be entertaining for an audience.

You’re right we got lucky in a couple ways in Season One, and some things that were completely unforeseen happened. But to be honest with you, that seems to happen a lot with us, and it was certainly true in Season Two. We wouldn’t have predicted that the season ended the way that it did and that people’s lives and careers ended in the way that they did as we were filming.

AA: In Season Two you seemed to widen the scope a little, focusing on five or six players instead of three or four. What motivated that decision?

GW: It’s strange, as we go along we treat our season of television as one big, long film, in different chapters. And whether one player gets screen time versus another player is completely contingent on, do we find this interesting? Is this entertaining? And it just kind of happened that in Season One there were about four players that became principal characters in the show, and in Season Two it seemed like there were about five or six that occupied that role.

It may have something to do with the fact that Netflix allowed us to do eight episodes instead of just six, and so we had a little bit more time. But an interesting component in Season Two was that the defensive line themselves became a character, led by their position coach, Davern Williams. We just found, over and over again, that their personality—and also the success of the team seemed contingent upon them being able to figure out their own chemistry among each other. And then it just helped that their individual stories were so interesting.

AA: As I was watching this season I kept thinking about the players who weren’t spotlighted. Are you sitting on a bunch of material about players who didn’t make it in, or do you decide early on in the season which guys you’re going with and then home in on them?

GW: More the former. We shot a lot of tape. In post-production, we’re treating it like found footage. Like, what are the stories that are popping? What’s emerging? And only a small percentage of that is contingent upon how well a particular player is doing on the field. A lot of times a player will have a vulnerable conversation with [academic counselor] Brittany Wagner that we catch on film, that will lead us to spend a little more time with that player, we do a little more digging with cooperation from the player, permission by the player to learn more about their backstory. And as long as we can tell someone’s story with a strong beginning, middle and end, that’s the winning formula for us.

There are tons of other great players and great stories that we have a lot of tape on, but what happens is, we’ve got to turn in these episodes to Netflix, and in some cases some of these stories haven’t really resolved themselves, haven’t been completed, and we don’t really know what to do with them. So it’s possible we could come back to them in subsequent seasons. We don’t know. But to answer your question, we’re sitting on a lot of tape. We could probably make a couple of different seasons given enough time.

AA: Based on what you edit in or out, you have a lot of power to shape how viewers see these players, particularly with someone like DeAndre Johnson with a high-profile and controversial backstory. Do you take that into account, or are you singularly focused on making as compelling a documentary as possible?

GW: We have to take the footage that we’ve shot, and as storytellers we have to react to that. What is the most interesting way to tell this story? And as long and we’re being honest and authentic, we feel like we then have this second obligation to do it in the most compelling way possible.

With DeAndre’s story, we don’t hide anything, we don’t go out of our way to make DeAndre look bad or to look good. Our job is to just tell his story and just be authentic. And hopefully it is compelling at the same time.

GW: Yeah, we had pretty lengthy conversations before the season even began, before we even began filming, with Coach Stephens and the president of the college, and we walked through what kind of access we needed, and they agreed. And you’re seeing moments where you just have a natural human reaction. The more vulnerable a moment, the less you want the cameras around. The problem with that, of course, is the more vulnerable the moment, the more the cameras want to be around. We just allowed that tension to be part of the season. If there were moments that Buddy was getting frustrated with the cameras, we allowed that to be there.

I think it helped audiences to understand the kind of strain that he’s under. I don’t think he’s behaving in a way that’s irrational. I think it’s a perfectly logical reaction to go, “I don’t want these cameras.” But by the same token, it’s important for the audience to know, all parties involved have agreed to allow those cameras to be there, so we fight to be there in those moments. If we didn’t do that, we wouldn’t have a show.

We take great pride in getting shots that no other crew is able to get, in terms of covering football in particular. And, to be honest with you, if Buddy really wanted to he could throw us off the sidelines any time he wanted to. So even though he gets tense, he gets angry, it’s because he’s allowing us to be there, because Brittany is allowing us to be there that we’re able to be there.

AA: It seemed like more so in the second season than in the first season, Buddy was the main character and the guy the show revolved around. The whole drama was whether he had really changed like he said he had. Do you view Buddy as the show’s hero or its villain or somewhere in between?

GW: We have taken an approach to story-telling in which we want there to be a gap between what we personally feel and what the audience is watching. We’re hoping that the audience is watching this story and they feel the freedom to draw their own conclusion. There are certain cinematic tricks, there are things you can do in post-production that you can make someone look really, really bad. Or you can make them look really, really good. And we hopefully resist all those tricks. We don’t want to hide from dramatic moments—we need those dramatic moments, whether they shine a good light on a character or a bad light—but when we do our job right, we are a fly on the wall, and we’re allowing the audiences to draw their own conclusions.

AA: What will the show be like without Brittany Wagner (who has left EMCC to start her own academic counseling business)? She’s been such a major part of it. Are you worried at all about losing her as a character in the show?

GW: Oh listen (laughs), she’ll be a part of everything we do. We’ve got so much footage on Brittany. We could go on for many, many years telling the Brittany Wagner story. In all honesty, Brittany Wagner is the heart of the show. In many ways we film a family when we’re at East Mississippi. They say themselves that they are a family. Brittany is the mom, Buddy Stephens is the dad, and Season Two we filmed their divorce.