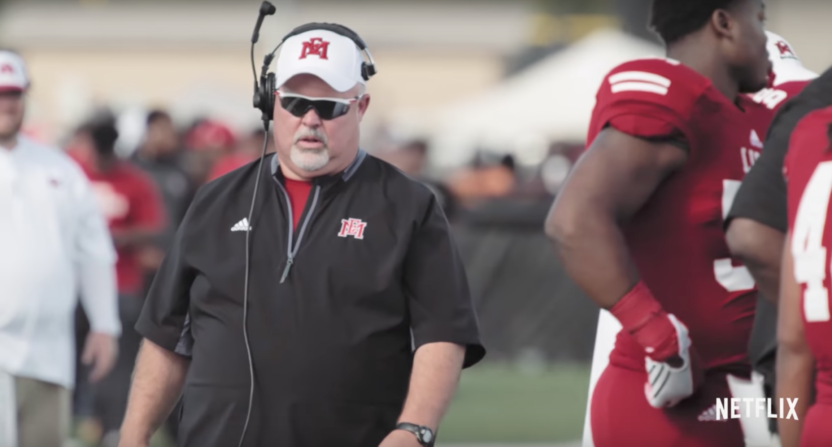 The script for the second season of Last Chance U was written the moment the first season hit Netflix last summer. Once East Mississippi Community College coach Buddy Stephens and his Lions players and staff saw the documentary that gave their tiny school some national shine, there was no way they wouldn’t approach Season Two with a new awareness of how their lives looked on camera.

And so the eight-episode second season, released Friday on Netflix, has at least as much heart as its predecessor and nearly as much tension, but it also has something new: a self-awareness that fuels the season’s biggest storyline but also removes just a touch of the genuineness that makes the show so special.

In one of the opening scenes of Last Chance U’s new season, Stephens reflects on his behavior the previous year, when he physically attacked a ref, helped incite a massive brawl and called his own players thugs. Stephens acknowledges that he didn’t like what he saw of himself on the documentary and announces a new resolution. From now on, he says, he won’t curse as much.

Of course, to anyone who watched Season One, Buddy’s promise to quit swearing was like a bank robber vowing to wipe his shoes on the mat before entering the vault. Thus, it is a disappointment (but not a surprise) to soon after hear Stephens defend his behavior with a “how-the-sausage-gets-made” argument that practically absolves all his sins.

Director Greg Whiteley’s decision to focus so heavily on Stephens’ character development has its benefits and its drawbacks. One standout episode, maybe the season’s best, contrasts Stephens’ boisterous style with the gentler demeanor of an opposing coach, who helms a program that hasn’t won a game in three seasons. The episode deftly conveys that although EMCC may be small potatoes for players with SEC aspirations, it’s a soulless powerhouse by the standards of its competition. When Stephens and EMCC predictably crush the overmatched opponent, it’s natural to wonder why we’re rooting so hard for such a crass man and his bludgeon of a program.

But time and again we’re reminded why we invest so deeply in the EMCC team, when the show welcomes us to the lives of the Lions players, sharing their backstories, their daily struggles and their anxieties about the future. Last Chance U is at its best when the drama isn’t about wins and losses but about personal successes and failures, on and off the field. These new episodes spotlight more players than the first season did, brilliantly calling attention to all their complexities and nuances. Religion, always part of the show but rarely a focus, comes to the fore in one well-crafted episode, while another examines the families, particularly the mamas, of the guys in uniform. The magic of the show is its ability to make a cast of obviously flawed characters deeply lovable, to get you rooting with every fiber you have for their success. The fact that Buddy never quite gets there isn’t a problem. In fact, he functions perfectly as a sort of (well-intentioned, perhaps) villain, who the players we adore must overcome to get what they’re after.

That said, Stephens’ bombast also poses problems for the show. At numerous instances, particularly late in the season, the coach bulldozes other storylines, crushing beloved characters beneath his anger, profanity and “tough it out” ethos. Early on, the show establishes running back Isaiah Wright as the lovable hero with the harrowing backstory—this season’s Ronald Ollie—but by the final episodes his role mostly involves staring up at Stephens’ heel.

Wright isn’t the only player whose trajectory flattens over the course of the eight episodes. This season can almost be separated into two parts: The first six hours, in which Whiteley spotlights relatable characters with deft storytelling, and the final two hours, in which all sorts of discord give the show a darker feel. There’s no climax as dramatic as the fight that ended Season One, but the same foreboding vibes show up anyway.

That angst and anger sometimes extends to the documentary itself. The deeper the season goes, the more often Stephens and others seem downright fed up with Whiteley and his crew. The coach yells at cameramen as much as at his players, and various players and coaches wave off cameras, mute their microphones to avoid being heard, and caution peers to behave for the filmmakers. The tension reaches its natural endpoint when Stephens shoves a camera out of his face on the sideline during a game.

This season was filmed last fall, only weeks after Season One became a national sensation, and it’s easy to wonder whether everyone at EMCC was a little too aware of the bright lights. Whenever Stephens or one of his players stares deep into the lens and professes to have changed his sinful ways, you can’t help consider that this supposed transformation is at least partially designed for public consumption.

It’s likely that no one in the EMCC program was more image-conscious than DeAndre Johnson, who was kicked out of Florida State after punching a woman at a bar, in an incident that made national headlines. Entering the season, Johnson looked like a lock to be one of Last Chance U’s headliners, but he faded into the show’s background, largely because he avoided drama. He played well, worked hard academically and said all the right things, both into the cameras and on the sidelines, and thus played a smaller role in the documentary than anyone could have anticipated.

The fact we’ve made it this far without mentioning Brittany Wagner indicates the extent to which Whiteley and company moved away from her and toward Stephens this season. Everyone’s favorite academic counselor is still around, joking with players and pressuring them to go to class, but she’s no longer quite so central to the narrative. Now she has left EMCC to start her own academic counseling business, her time as a Last Chance U regular is likely over.

In a phone interview with Awful Announcing on Thursday, Wagner admitted that the reaction to Season One affected how she acted in Season Two, even if only slightly.

Last Chance U remains as authentic as any television show you’ll ever find, full of complex characters and spontaneous drama presented judgement-free by a team of brilliant storytellers. But, paradoxically, the show’s world may have been just a bit more interesting before the show arrived in it.