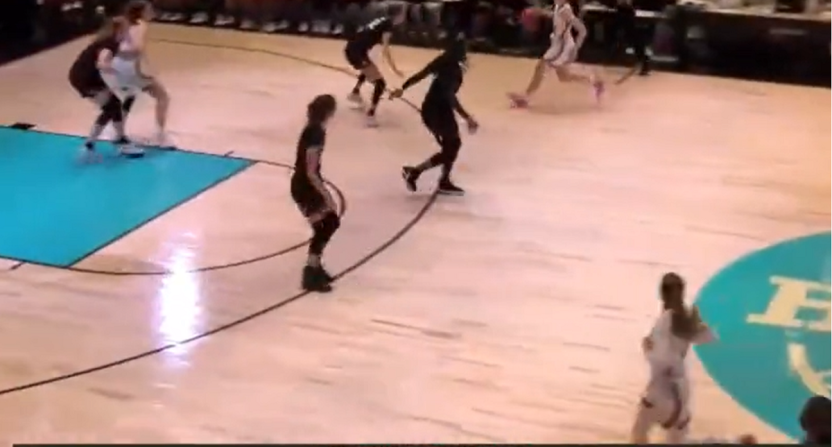 Earlier today, #5 N.C. State knocked off #2 Maryland on a neutral court at the Baha Mar women’s basketball event in the Bahamas. #7 Stanford followed that up by beating #4 Indiana at the same event.

Those are two terrific matchups, and the event is also slated to give viewers Stanford vs. #18 South Florida tomorrow, along with Stanford vs. Maryland, N.C. State vs. Washington State, and Indiana against Miami on Saturday. Having four top-ten teams and other power conference opponents together for a non-conference neutral court event is a fantastic thing for the women’s college game, the chance to draw in eyes looking for something beyond a bad Bears-Lions game to check out on a holiday.

Unfortunately for anyone so inclined, unless they were somehow already FloHoops subscribers (or in the Bahamas live), they were out of luck.

A top-10 matchup for #iuwbb is not on national television and instead is on FloHoops, an online streaming service which requires a $30 subscription fee. https://t.co/FZ8gUPh2nj

The entire event, in fact, is exclusively available via FloHoops. (I was struck that while browsing the FloSports site earlier, it’s really hard to figure out how much it would cost to sign up and watch games; no pricing is readily available without starting the sign-up process, which requires giving them an email address or authenticating with Facebook.)

We’ve obviously covered FloSports in the past, and they certainly deserve the exclusive rights for which they’ve paid. Exclusivity is the lifeblood of any over-the-top streaming service.

Belibi scores back to back buckets for Stanford!

What’s disappointing, though, is that considering all of the outlets who could be showing these games today, it’s on such a limited platform. An event like this is an opportunity to continue to push growth of a sport that deserves it. Instead, even people who subscribe to multiple providers and want to watch (like, say, me!) can’t do it without also adding yet another paid subscription. (And considering my brief exploration of the FloSports signup process, I personally wouldn’t want to deal with trying to cancel a monthly rate, either.)

If the only reasoning for not finding a way to set up big nonconference showcase events like this with a more widely available platform is that women’s basketball doesn’t draw eyes, that’s just not good enough. It isn’t good enough in a vacuum, and it certainly isn’t good enough when there are examples like this, which demonstrates how long-term organic growth is hamstrung in ways that don’t happen on the men’s side. (Belmont-Drake is a fun little midmajor contest featuring teams that will likely at best be on the men’s tournament bubble this year. It’s airing on ESPNU.)

To recap: big showcase games with top women’s hoops teams should absolutely happen more often. They should just be created and managed in ways designed to get them in front of as many viewers as possible.