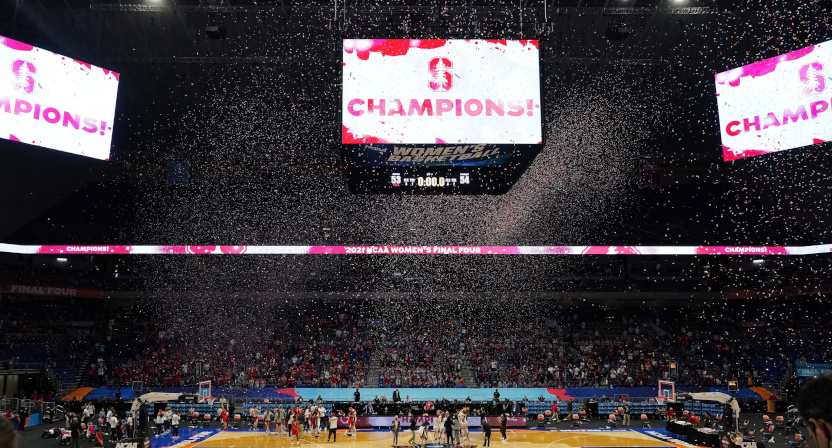 That video prompted further discussions of a variety of inequities between the men’s and women’s tournament (Stanford’s 2021 championship win is seen above). It led to NCAA president Mark Emmert saying “it is pretty self-evident that we dropped the ball in supporting our women’s athletes, and we can’t do that.” The NCAA then commissioned a gender-equity review of the tournaments from law firm Kaplan, Hecker, & Fink, which was released in August, and had some particularly notable comments on the media rights side. Those included discussion of how the women’s tournament was partly treated poorly because of a perceived lack of TV value, but that lack of TV value came from the NCAA bundling it with 28 other championship events rather than letting it stand on its own. And another thing the law firm flagged was the women’s tournament’s inability to use “March Madness” for branding, with the NCAA reserving that for only the men.

Well, the NCAA has now changed that approach, allowing the women’s tournament to use “March Madness” as well beginning in 2022. They’ve announced further changes as well that may be even more significant, including zero-based budgeting; that means that both the men’s and women’s basketball tournaments will have to justify each part of their budget from scratch rather than just building off of previous years. That could be particularly huge for avoiding things like the obvious accommodation discrepancies we saw this year. Here’s more on the changes from a NCAA release:

“Women’s basketball has grown tremendously over the past several years, and we remain focused on our priority of enhancing and growing the game,” said Lynn Holzman, vice president of women’s basketball. “The brand recognition that March Madness carries will broaden marketing opportunities as we continue that work to elevate the women’s basketball championship.”

…”This is just the start when it comes to improving gender equity in the way the two Division I basketball championships are conducted,” said Lisa Campos, chair of the NCAA Division I Women’s Basketball Oversight Committee and director of athletics at the University of Texas at San Antonio. “Adding the March Madness trademark to the Division I Women’s Basketball Championship will enhance the development and public perception of the sport, and the oversight committee looks forward to its work to address other recommendations through the governance structure to continue those efforts.”

…In another move, the NCAA national office has implemented a zero-based budgeting method for the two championships. Instead of adjusting budgets from the previous fiscal year, the men’s and women’s basketball championships staffs are starting from scratch in determining budgeting expenses, which must be justified and approved for each new period.

The move is designed to show where justifiable differences in the allocation of championship financial resources exist and are appropriate, with an eye toward increasing opportunities for planning collaboration and cross-promotion, as well as making the two championships more financially equitable.

The Men’s and Women’s Basketball Committees and Men’s and Women’s Basketball Oversight Committees also are conducting regular joint meetings to better collaborate and ensure alignment between the two championships. Additionally, the Division I Council in August assigned committees within the NCAA structure to evaluate recommendations from the gender equity report that fall under those committees’ purview. Those membership-led committees meet regularly and have begun assessing the viability and practicality of implementing the recommendations.

Of course, everything isn’t fixed from the NCAA using “March Madness” branding for the women’s tournament as well. There’s a long way to go towards fuller equity, as that law firm report described. And even the zero-based budgeting approach here is unlikely to provide actual equity, especially not at first. And the NCAA has a lot of other issues to deal with, and is in the headlines on a lot of other fronts, especially including a National Labor Relations Board memo Wednesday that college athletes at private institutions should be considered employees under the National Labor Relations Act.

So we’ll see just how much change the NCAA actually produces around women’s basketball. And we’ll also see how many people will continue to hold their feet to the fire on reform efforts. But the “March Madness” branding and the zero-based budgeting are steps towards more equity in NCAA basketball. They’re also interesting steps on the media side, as that allows ESPN (which airs the women’s tournament) to use the “March Madness” branding CBS and Turner have often used for the mens’ side. And even if the NCAA got to these steps years after they should have and did so only under extreme external pressure, they’re still steps in the right direction.