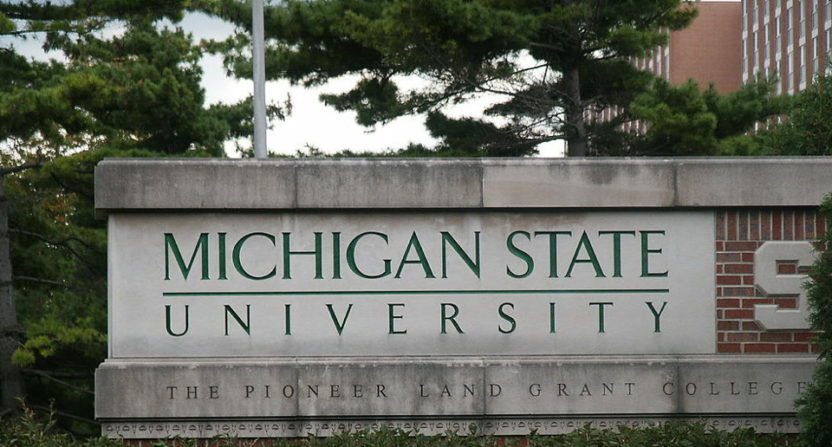 In the wake of former Michigan State and USA Gymnastics doctor Larry Nassar’s sentencing to between 140 and 360 total years in jail over criminal sexual conduct, the university has been crying poor about potential settlements with Nassar’s victims, even saying that students could face tuition hikes to cover those costs (which could reach up to $500 million).

But while it’s not on that financial scale, the university has been awfully free with its spending on public relations, paying one New York-based PR firm over $500,000 in January alone to monitor social media activity around the Nassar case (including the accounts of victims and their families, journalists, celebrities, and politicians) as well as news outlets’ coverage.

Here’s more on that from Matt Mencarini of The Lansing State Journal:

The work by Weber Shandwick, a New York-based firm, totaled $517,343 for more than 1,440 hours of work, according to documents obtained through a public records request. The firm billed for work done by 18 different employees, whose hourly rates ranged from $200 to $600 per hour. Five of those employees billed MSU for more than $50,000, including one who billed for $96,900 and another who billed for $120,893.

Weber Shandwick no longer works with the university, an MSU spokeswoman said. She did not provide a reason and referred comment to the firm.

“As part of Weber Shandwick’s work providing communications counsel, the firm monitored media and social media conversations surrounding the university, which included posts from the survivors of the Larry Nassar case.” 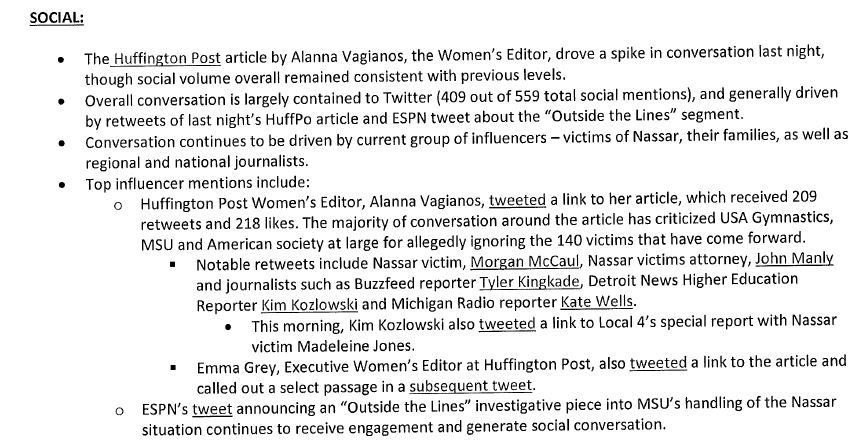 It should be noted that the $500,000 is only a drop in the bucket of what Michigan State has spent around this case so far; Mencarini’s piece notes that as of March 2, the school had been billed “$9.69 million by outside law firms and consulting firms in connection with work on lawsuits or communications strategy related to Nassar’s criminal case and related fallout,” plus $5.4 million from another New York law firm and $2 million from a Los Angeles law firm. However, while large payments to legal firms can be questioned in their own right, that is obviously specialized work from high-powered people, and its impact can’t be fully evaluated until we see what the school winds up paying in settlements.

The massive payments to Weber Shandwick aren’t as large as what’s being paid to the lawyers, but they’re much easier to discuss considering what work seems to have been provided and what rates were charged. For comparison, Michigan State football coach Mark Dantonio made $4,390,492 in 2016, or around $366,000 a month, while Spartans’ basketball coach Tom Izzo made $4,150,359 that year, or around $346,000 a month. Yes, this is amongst 18 employees rather than a single coach, and Mencarini tweeted that this involves “1,443 hours worked in January,” but it seems pretty crazy that the school spent more on paying a PR firm in a month than they did on their well-paid top coaches.

And many have noted that a whole lot of this could have been automated, and done so at a much lower cost, including Stanford Journalism visiting professor Dan Nguyen:

MSU spent $500K with a PR firm to track social media and use Google News Alerts, for ONE month? Maybe the PR firm thought they were doing the ethical thing by overcharging MSU for attempting to defend Larry Nassarhttps://t.co/TB2bMyxe92 pic.twitter.com/84YJVHV6VM

MSU paid a PR firm "$200 to $600 per hour" basically to check the Trending section on Twitter and sum it up in an emailhttps://t.co/TB2bMyxe92 pic.twitter.com/gaNae27WR0

Another comparison: Geofeedia, the Palantir-wannabe purporting to monitor and geolocate social media for law enforcement, charged police only a few thousand $ per month. It was total BS, but they at least pretended to have something useful and actionable:https://t.co/gZaJhnZKfp pic.twitter.com/QdC0uTFGpO

And as Nguyen went on to note, beyond the questionable usage of funds, it’s well worth pondering why Michigan State was so concerned about what victims and their families were tweeting, and why they felt that was worth throwing $500,000 at:

Too easy to mock MSU for paying a PR firm so much for basic social media services. The more disturbing thing is how seemingly desperate MSU admin during post-Nassar damage control. Not just tracking tweets of victims and families, but throwing such obscene amounts of money at it pic.twitter.com/2LcT8KaDTC

Look, of course there’s some value in having a general idea of what people are saying about your school, especially around a situation like the Nassar case. And maybe there’s even value in the particulars; if a report has elements MSU can specifically refute, fair enough. Although it’s worth pondering if trying to battle media organizations is the best overall strategy in a crisis like this, that’s certainly a tack the school appears fine taking.

But it should be noted that the school already has a substantial PR team of their own (they have a whole Office of Communication and Brand Strategy, which did Nassar coverage roundups before Weber Shandwick was hired, and had some employees continue to work on that front in January as well), and while it’s maybe defensible to get some outside advice during a firestorm like the Nassar trial, it seems quite excessive to get that at a rate of over $500,000 a month, especially considering how easy it appears to be to get the data that Weber Shandwick provided through cheaper or more automated means.

We don’t know the whole story from the outside, of course, and maybe this is more defensible than it looks. Maybe Weber Shandwick provided more value than was detailed in this story or in the sample email. But this is certainly something that doesn’t look good on Michigan State, especially while they’re talking about how they can’t afford to pay victims settlements without jacking up tuition and/or declaring bankruptcy.

Yes, $500,000 is just 1/100th of the estimated $500 million in settlements here, but burning through that kind of money in a month for externally-generated coverage reports that seem easy to obtain either internally or through automation doesn’t seem like responsible financial management. And the close following of victims’ social media accounts feels least somewhat disturbing.

Plus, the willingness to spend so much for (apparently) so little on the PR front raises questions about the much larger sums being spent on outside lawyers, and just what value Michigan State is getting out of that work. And it raises further debate about how they’re handling the Nassar situation, and if their claims of being unable to pay victims without boosting students’ tuition really ring true.