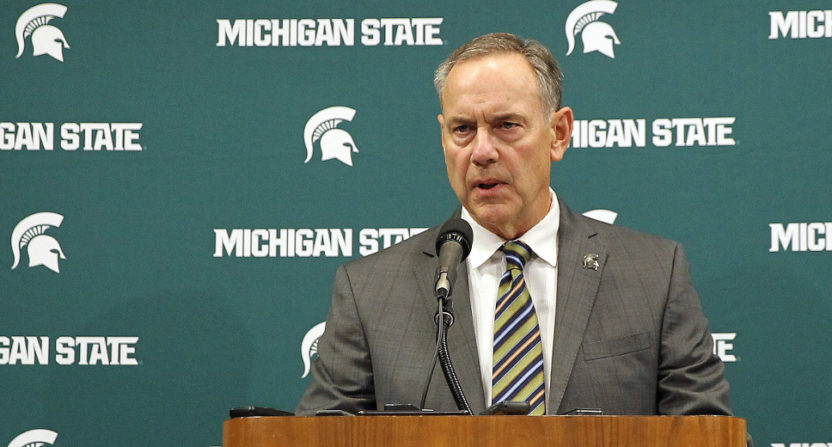 Michigan State University has had plenty of battles with ESPN, from a 2015 records lawsuit to another lawsuit last year over records requests. More recently, new president John Engler complained about the network’s “sensationalized package of reporting” that discussed instances of violence against women and sexual assault in the football and men’s basketball programs and how the university’s handling of those compared to their actions in the Larry Nassar scandal, and deflected questions about MSU’s record on sexual assault by saying ESPN “is one of the worst offenders in the nation” on that front.

Now, football coach Mark Dantonio (seen above at a Jan. 26 press conference responding to that ESPN story) is involved. Dantonio is upset over a stock photo that wound up in ESPN reporter Dan Murphy’s latest story on William Strampel, the former MSU dean and boss of Nassar who’s been charged with felony misconduct in office and criminal sexual conduct.

It’s not the story itself that’s in question, but Murphy’s tweet of it. That tweet came with a photo that was initially used as a thumbnail in the story, which was of the 50-yard line and its Spartans logo at Michigan State’s football stadium. However, this was not a generic shot of the 50-yard line, but a shot of it when it had been changed to include a #3 to honor former Spartans’ punter Mike Sadler, who was killed in a car accident in July 2016.  Having that photo linked to this story infuriated many Michigan State fans, and that outrage eventually made its way to Dantonio, who called out Murphy directly:

.@DanMurphyESPN has stepped OVER the line. This is totally unacceptable. M. Sadler is a deceased player whose memory was being recognized with his #3 in the Spartan logo during his life celebration at Spartan Stadium. He was a decorated Academic All-American. #RIP3 #Inexcusable https://t.co/vTeQUQ0hbb

The initial Murphy tweet in question later had its photo change when the photo with the story was changed. The original is captured here:

For anyone that wants to see what coach is referring to here’s a screenshot. It took @ESPN 7 hours to change the picture. pic.twitter.com/PSmOZQ1rUt

However, as Murphy noted on Twitter five hours before Dantonio went after him, he didn’t pick the photo and he notified editors of the issue once readers brought it to his attention:

That's a stock photo that generates automatically when we send out a tweet. It's not included in the story and certainly was not put there intentionally. I apologize if anyone was offended by it. https://t.co/UUKipyzqZu

I notified our news desk as soon as it was pointed out to me, and it's been changed.

The photo has now been changed to one of Strampel. And it’s possible to see both sides’ points here. The photo of the tribute to Sadler was absolutely an inappropriate choice for this story, and should not have been used, and Michigan State fans and Dantonio himself are right to point that out. In fact, any shot of Michigan State’s football stadium here wasn’t a great choice, as the Strampel story has no connections listed to football. (This was just a thumbnail of a logo not intended for display, but that’s going to pop up on social media discussion of the story.)

A generic midfield photo wouldn’t have caused as much outrage as the Stadler tribute photo, but it still could have drawn blowback. That’s especially true considering the previous “sensationalized package of reporting” criticism of ESPN for a graphic showing Nassar, Dantonio, and men’s basketball coach Tom Izzo . For a story that touched on all three, that’s somewhat logical, but it also perhaps implies an equivalence that the story doesn’t back up. The choice here is perhaps even less logical, though, as this wasn’t a football story at all. While midfield logo photos are sometimes used to represent a university as a whole, that seems like a poor choice with a hotly-charged subject like this one, and one where the network has already drawn fire for linking football and basketball to the Nassar case.

Of course, ESPN is limited to photos they have clear rights to, and there perhaps wasn’t a photo of Strampel (the best choice) available to them at this time. Still, there are better options they could have gone with. With all the photo services ESPN subscribes to, they must have access to some sort of general shot of Michigan State’s campus, and in the wake of the Nassar case, it seems pretty likely that someone’s taken a shot of the College of Osteopathic Medicine Strampel and Nassar worked at. Either of those would have illustrated the story better and provoked much less backlash.

But at the same time, while this was an ESPN error, it wasn’t Murphy’s error. At an organization like ESPN, reporters aren’t usually writing the headlines or picking the photos. (And that can be good in some cases and bad in others; an editor’s distance from the story can provide them with a different perspective, or it can have them make a mistake in headline or photo choice that the reporter would have caught.) And the way fans and Dantonio have piled on Murphy personally for a decision that wasn’t his and one he sought to correct isn’t particularly fair, and implying that this was somehow an intentional choice to use the photo featuring the Sadler tribute seems especially troubling. This was a bad mistake, but a mistake, and it’s far from proof of any sort of sinister ESPN agenda against Michigan State.

Should ESPN be more selective with their photos around stories like this? Absolutely. Any story involving these kinds of allegations needs to be handled carefully, and it’s worth noting that in a social media world, a headline and photo often are seen by many more and create more reaction than the actual story in question. Time should be spent on those headline and photo choices, and mistakes like this should be avoided. But at the same time, some of the outrage goes too far, especially when it’s directed at the reporter who didn’t choose the photo.