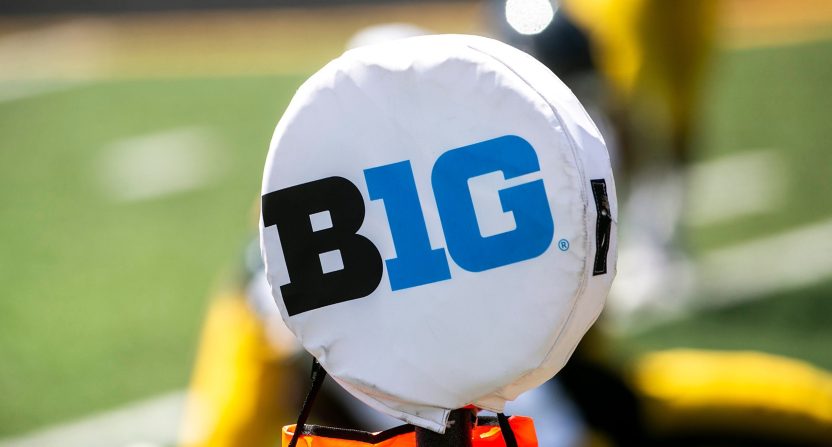 The Big Ten’s TV rights deals expire next summer. There will be plenty of possible suitors in play, including incumbents Fox and ESPN (CBS also has a deal with the conference, a much smaller deal for basketball games).

But just how much money will the conference receive? Michael Smith of the Sports Business Journal confidently proclaims that the deals will top $1 billion.

The Big Ten will become the first college conference to eclipse $1 billion per year when it negotiates its next media-rights deal later this year. That’s the opinion held by several well-placed sports business sources, who expect the conference to more than double the $440 million in annual rights fees that Fox and ESPN currently pay.

Both Fox and ESPN want to retain their parts of the package, and for Fox, it’s probably a much bigger need, given how much the conference anchored Fox’s Big Noon window in recent seasons. Fox also owns a significant stake in the Big Ten Network, which would perhaps indicate they’re not going to be out of the picture any time soon.

As for ESPN, they’re currently in an exclusive negotiating period with the Big Ten. SBJ’s John Ourand reports that the conference will let the window lapse to open the door for more bidders. Both Smith and Ourand report that CBS and NBC would be very interested in the Big Ten’s rights – CBS would use the conference to replace the SEC, and NBC would pair the Big Ten with Notre Dame home games to create doubleheaders.

Both the ACC and SEC have long-term deals with ESPN, and the Pac-12 and Big 12 (whose rights deals also expire in the coming years) don’t have quite the same level of pull as the Big Ten (especially with traditional powers Texas and Oklahoma heading to the SEC). That puts the Big Ten in a great position (which, to be fair, everyone has known for awhile) when it comes to negotiating their rights deals, because the conference knows how in demand it will be to the networks bidding.