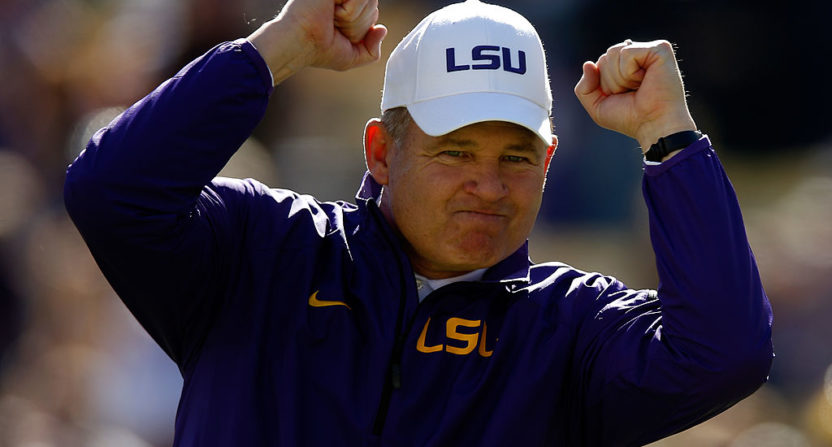 Former LSU football coach — and grass-eating aficionado — Les Miles has been away from coaching for 18 months, and while he’s not giving up on coaching again, he’s currently enthusiastic about his acting career.

The Advocate has a must-read feature on Miles and explains how the 2007 national championship-winning coach has caught “the acting bug.”

“I have several projects that I’m looking at. I’m reading for those,” Miles said in a recent interview.

“I don’t know that anybody ever doesn’t dream at one point in time, ‘I’m going to be in a movie,’ ” Miles said, explaining his acting fascination. “I don’t know how you don’t think that way. As a child, I wanted to be the president of the United States, wanted to be a head football coach and wanted to be an actor in a movie. We only get one go-around at this thing called life. There’s no do-overs.”

It was known two years ago that Miles would be making a cameo as a cop in the independent film Camera Obscura, which was released in 2017. And photo proof of Miles as a cop in the film surfaced in July 2016.

Les Miles is appearing in a movie as a cop. That's old news.

Miles, 64, also made a cameo as a football scout in the 2014 independent film Where the Game Stands Tall,  and will have “his biggest role yet” in Angry Men, a film inspired by the 1986 Challenger explosion that will be released in June. Miles plays a NASA chief in the movie.

People in the film industry have described Miles as “passionate” about the craft, and actor Michael Papajohn (a former LSU baseball player) says Miles has “the ‘it’ factor.”

They describe him as a passionate, hard-working novice who strives for perfection, a driven individual who just might have a future on the big screen.

“There’s something an athlete or coach has that can’t be taught in an acting class,” Papajohn said. “He’s got it. He’s got the ‘it’ factor.”

Miles still intends to continue working as a college football analyst for Fox, and he’s not giving up on coaching, but he’ll be picky about where he’d coach.

The job must be at “the right place,” he said, and must have an athletic director and president committed to winning at the championship level.