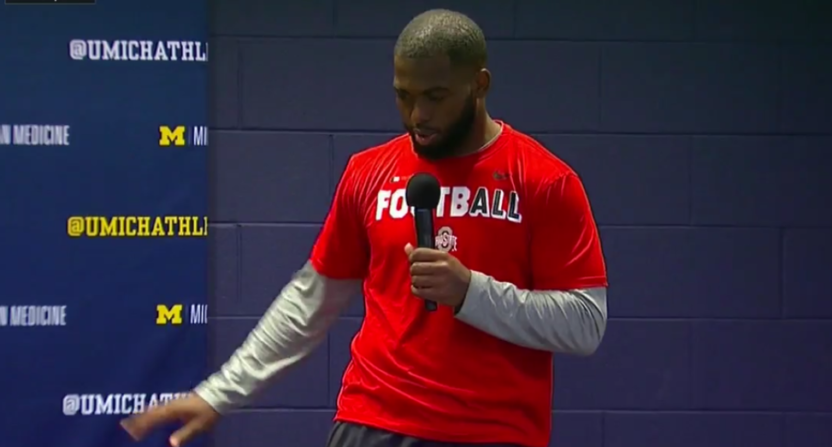 It turns out that the injury that forced Ohio State Buckeyes’ quarterback J.T. Barrett from their 31-20 win over the Michigan Wolverines Saturday happened before kickoff, and appears to have been thanks to a cameraman on the sideline. After the game, Ohio State head coach Urban Meyer talked about the injury and vowed to investigate, saying “I’m going to find out who”:

“Well, I’m just so upset with myself. That was a non-football injury, too many damn people on the sideline. And a guy with a camera hit his knee. I’m going to find out who and think about that. I’m so angry right now, I’ve got to move on, that I let that happen.”

Barrett later reenacted what happened for the media:

“He hit me, and my knee shifted in and twisted up on me.”

Barrett was able to play early on, but appeared to reaggravate the injury in the third quarter and left the game, going to the locker room to get some treatment for the cartiledge issue before returning to the sideline. Backup Dwayne Haskins Jr. filled in and led a touchdown drive that helped the Buckeyes seal the win. And Barrett said afterwards he plans to play in the Big Ten championship game against Wisconsin next week.

But Meyer’s certainly incensed about this, and understandably so; football causes enough injuries during games and practices, and you definitely don’t want players injured by media members during warmups. And, for what it’s worth, a reporter from Cincinnati’s Fox 19 said he spoke with someone who saw the incident and thought it was malicious:

It’s not clear who the cameraman in question was working for. Fox was the game broadcaster, but the Big Ten Network also tends to have some sideline access for cameramen for their The Journey program, and Amazon, BTN and the Montag Group have teamed up for a forthcoming documentary on Michigan football, so there may have been cameramen there working on that as well. Big games like Ohio State – Michigan tend to draw a ton of media and a ton of people on the sidelines, making for cramped quarters, and that may have been part of the issue here. We’ll see if any further details emerge on just what happened in this incident.