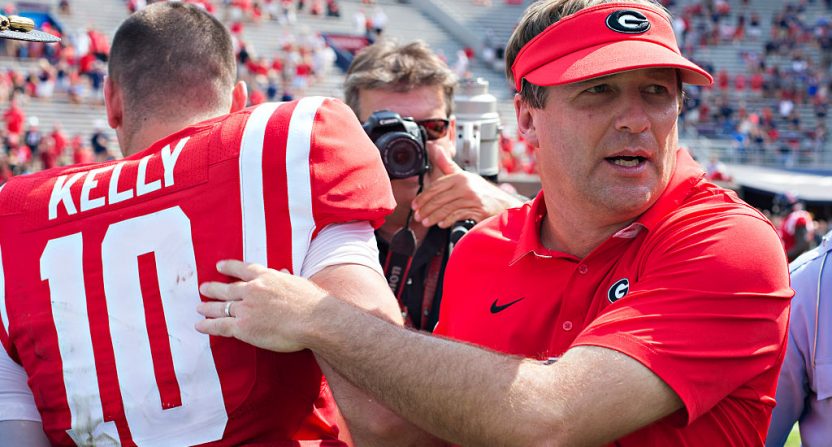 If Georgia wanted a coach that was in the very mold of Nick Saban to be their head coach after moving on from Mark Richt, it sure seems as though they found him. Entering his second season as head coach of the Bulldogs, Kirby Smart has wasted no opportunity to leave his totalitarian stamp on how the Georgia program is run, and that now includes what the media may or may not report when it comes to injuries.

Georgia is instituting a new policy directed at the media. The policy directs members of the media to not report on injuries observed during practices open to the media until Smart gets the first opportunity to address them.

Beginning today, injuries — non-contact jerseys and injuries seen in front of media — can't be reported until Kirby Smart is asked.

Notice how that is worded by Georgia beat reporter Jason Butt of The Telegraph: “until Kirby Smart is asked.”

Here’s the kicker: there is nothing that says Smart even has to answer the question or shed any light on the injury status of a player he is being asked about. And don’t expect him to either, unless he’s in the mood.

The new policy is the result of Smart getting fired up over the reporting of an apparent injury to freshman defensive back Deangelo Gibbs last week during a practice. Smart was asked about the injury after a practice, by which time the reports or observations form practice were already spreading on the internet, as news often will these days. Rather than take the high road about the injury, Smart took a shot at the media with a snide response.

“Well, considering I haven’t had a lot of time to talk to the trainers, but it’s nice to know that you guys have found it in your hearts to report it,” Smart said, according to Athens Banner-Herald. “So his mom has to find out from you guys rather than from us, which upsets me a little bit to be honest with you. I don’t think it’s really fair.”

Smart is drawing a line in the sand with the media. Locally, Smart will have the upper hand, but these types of shenanigans will not be untested by the national writers who do not need to adhere to the coach’s desires for the sake of their jobs.

Generally reporters don't want to start a war with those they cover but general policy: you are open or closed. If I see it, it happened. https://t.co/FL6Z9iFo67

Yeah, let’s not pretend Georgia has become more transparent under Kirby. Let’s not do that. https://t.co/d5UfkTNfUF

As far as the local reporters who generally work at smaller newspapers and media outlets, having access is both a right and a privilege bestowed upon them by the university’s athletics department. It’s a catch-22 in a sense, because they cannot do their jobs without the press credentials, but they cannot keep their credentials unless they fall in line under Georgia’s media policies. If a reporter dares to challenge Smart and his injury news gag order, then he or she risks losing a credential. Sure, it would be a bad PR move for Georgia and Smart if it came to that, but that appears to be the direction Smart is taking Georgia as head coach. It’s his way or the highway.

Why would Georgia introduce such a policy? It’s difficult to say for sure, other than to provide Smart with an inflated ego. On one hand, there is the privacy of a player that should be protected for the sake of the kid’s private health issues. On the other hand, reporters have one job to do; report. As national Associated Press writer Ralph Russo said on Twitter, if they see something happen, it happened.

Should reporters be mandated by an athletic department to keep from sharing news until given the green light from the head coach? That’s a bad trend to start enacting.