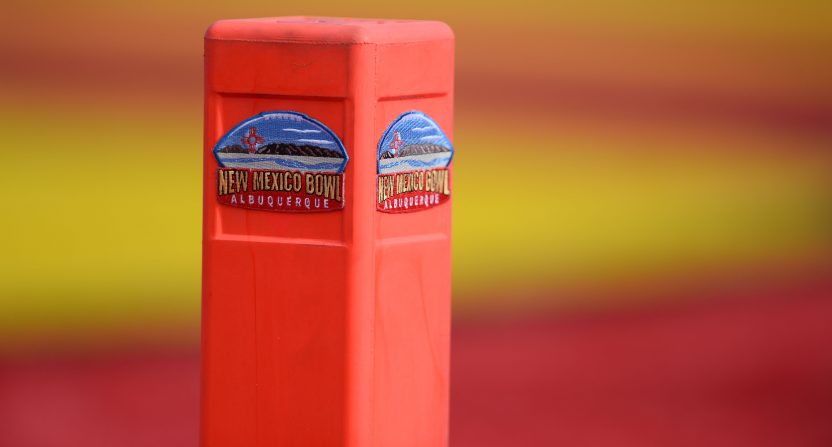 The New Mexico Bowl is one of those ESPN-created bowl games that takes place before Christmas, despite the fact that no one has actually demanded it. The current matchup in the New Mexico Bowl pits the Mountain West against Conference USA, and last year’s game featured a damned good Utah State team wiping the floor with North Texas.

For years, Gildan was the game’s title sponsor, but after the game went sponsorless last year, ESPN announced a new title sponsor for the game earlier this month – DreamHouse Productions. There was just one problem with this announcement.

Shortly after the announcement, New Mexico-centric sports site Enchantment Sports began work on a series of articles exposing DreamHouse and CEO Eric Martinez (referred to as a “scam artist”) as fraudulent. One of the Enchantment Sports articles claims that DreamHouse hasn’t even broke ground on their studio that was supposed to open this past spring, and an article from this Wednesday by the Albuquerque Journal reveals that DreamHouse’s address in state records is the same as Martinez’s home address in court records.

Here’s a delightful excerpt from the Journal about the nonexistent studio.

But this week, there were no signs of DreamHouse at the Aperture Center. The three-story building is mostly vacant, except for a cafe and a construction business.

Martinez said in an interview earlier this month with an Arkansas television station that the company’s space was next to the Netflix production hub at Mesa Del Sol. But when asked about DreamHouse at the Netflix gate this week, a security guard said he didn’t know of the firm, adding, “That’s a new one to me.”

On Thursday, ESPN severed ties with DreamHouse without offering much in the way of reasoning to the Journal.

“We notified DreamHouse today that we have terminated its title sponsorship agreement with the New Mexico Bowl,” ESPN spokeswoman Anna Negron said in an email to the Journal. “We remain focused on ensuring a quality experience for fans.”

In the Journal’s first story questioning the credentials of DreamHouse, Martinez’s debt issues were noted, which includes a lack of recent garnishment of wages.

Court filings in April show Martinez now owes at least $16,717 to CACH LLC on a credit card debt. Efforts to garnish his wages to repay the debt show the most recent garnishee was Sony Pictures Imageworks Inc.

But Sony’s answer filed in May shows handwritten notes that Martinez wasn’t a current employee and received only residual checks periodically.

The judge in the case allowed Sony to withdraw as garnishee.

This really seems more embarrassing for ESPN than it does for DreamHouse. Did anyone at ESPN Events do any research on DreamHouse, or did they just take Martinez at his word? Were they so desperate for a title sponsor that they didn’t bother digging into the company’s history? Yeah, DreamHouse should be taken to the woodshed, but it’s not as if the company actually exists or has a brand new studio churning out project after project.

We’ll see if ESPN can pick up another title sponsor less than two months before the New Mexico Bowl. At this rate, Netflix should step in, call it the “El Camino: A Breaking Bad Movie New Mexico Bowl,” and be done with it. Hell, given some of the title sponsors we’ve seen in the past for bowl games (magicJack! Tropical Smoothie Cafe! Elk Grove Village!), it might not even crack the ten most ridiculous sponsors.