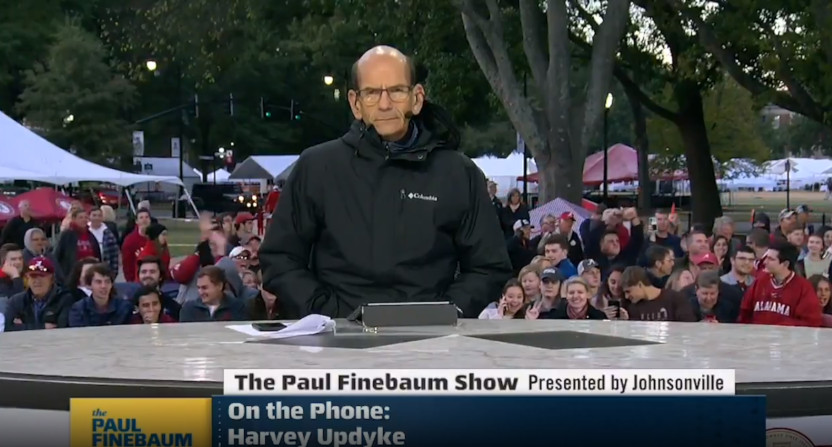 An important element with call-in shows is that there is usually at least some form of caller screening process. Networks aren’t always aware of exactly what particular callers will choose to say on the air, but there’s generally some element of screening so that those who have previously said problematic things on air (or those who seem likely to do that) don’t get a big platform. Well, you would think that would certainly apply to Harvey Updyke Jr., but you would be wrong.

A quick refresher: Updyke is the Alabama fan who poisoned Auburn’s famed Toomer’s Corner trees back in 2010, revealed it in a 2011 call to The Paul Finebaum Show (a Birmingham radio show at that point, now a SEC Network show), served jail time for that after pleading guilty to criminal damage of an agricultural facility (a Class C felony), and barely paid back any of the damages he was ordered to. And this week, he failed to show up for a court-mandated hearing this week over his failure to pay restitution. But that didn’t stop him from getting a national platform; Finebaum and his producers elected to put Updyke on the air Friday (during a live taping in front of an audience in Tuscaloosa ahead of LSU-Alabama Saturday) anyway:

Harvey Updyke called into the @Finebaum Show. Paul let him have it. pic.twitter.com/JQEbooE4Jb

Some quotes from Updyke on that show, via Sydney Hunte of Saturday Down South:

“Harvey, we’ve had this conversation privately, but we’re going to have it publically,” Finebaum responded. “You still don’t get it, do you?”

“It was supposed to be a joke,” Updyke replied. “I’m not as dumb as I look. I get it very much. I know exactly what’s going on.”

Finebaum’s on-air criticism of Updyke is fine, but giving him a giant platform like this (especially when he’s currently  is an issue in and of itself. And many people noted that:

Only on @finebaum would a criminal being pursued currently by the Lee County District Attorney’s Office be allowed 5 minutes to insult Auburn people with feigned ignorance…all while the live audience cheered for said criminal. Harvey Updyke should be in jail. https://t.co/JbkbvMThkX

Who the hell thought that was a good idea?

Y'all should be ashamed of yourselves @SECNetwork

It’s kind of sad that the SEC network gave Harvey updyke attention and a chance for Alabama fans to give this man applause. Sad scene today.

It’s hard to disagree with that. If Finebaum’s call screeners follow any rules (and that’s a real question, given some of the things that have made it to air on that show), Rule No. 1 at this point really should be “No Harvey Updyke.” Instead, ESPN and SEC Network provided a giant platform for a convicted felon to again justify his actions.