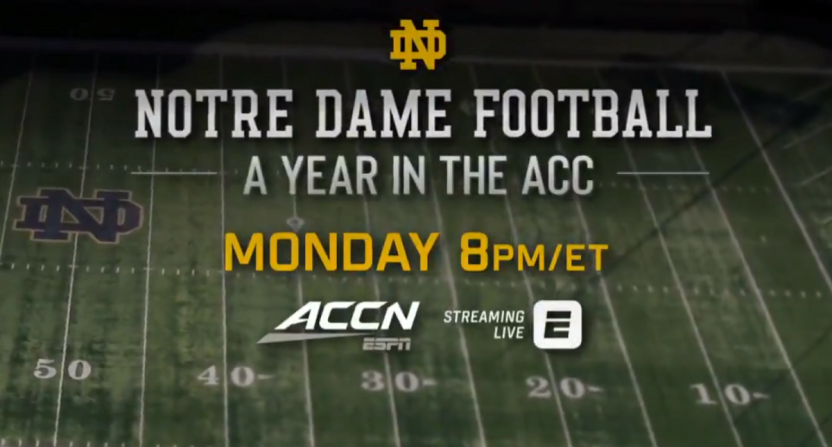 Notre Dame football is an independent program. They had been for a century before last year, and they are now once again.

For one season, though, they were an ACC football program. It took extraordinary, unprecedented circumstances for that to happen, of course, with the pandemic forcing most major conferences to abandon non-conference opponents. That meant Notre Dame needed a league if they wanted to play a season; already an ACC member in non-football sports and playing five or six games per season against ACC competition, this was a logical marriage.

There were still hurdles, though, including how Notre Dame’s unique television deal would be integrated into the conference’s existing media rights payouts, among many other factors, but in the end the Irish ended up making a run to the ACC Championship game (falling to Clemson) and the College Football Playoff (falling to Alabama.)

Now, the ACC Network and ESPN will produce a look at Notre Dame’s year as a conference member. Titled (appropriately) Notre Dame: A Year in the ACC, the documentary promises plenty of behind-the-scenes looks at the team’s undefeated run through the regular season, and what it meant to be a conference member, even if the arrangement of necessity lasted just one year.

? Notre Dame Football: A Year in the ACC

Premieres Monday, May 3 | Exclusively on @accnetwork

But from that same Andrea Adelson report for ESPN, ACC commissioner John Swofford called the arrangement a “win-win”:

Swofford also isn’t holding his breath for a permanent Notre Dame-ACC marriage, though he did point out that if the university decides to join a conference any time between now and 2036, the contract states it would move into the ACC. And it doesn’t hurt that both sides benefited this season.

“I know Notre Dame always has and still continues to cherish its independence in football,” Swofford said. “I think Notre Dame would say, and we would say, that their first year in a conference ever in the sport of football has been a very positive experience. I don’t know that that necessarily translates down the road or for the future, but it was certainly the right thing to do for 2020.”

Taking a documentary-style look at one of the many ways the pandemic forced pragmatism at the expense of tradition in college sports makes a lot of sense, and “Notre Dame forgoes independence” was a pretty big tradition to upend.

The film premieres May 3rd on ACC Network, and will also be available to stream via the ESPN app.