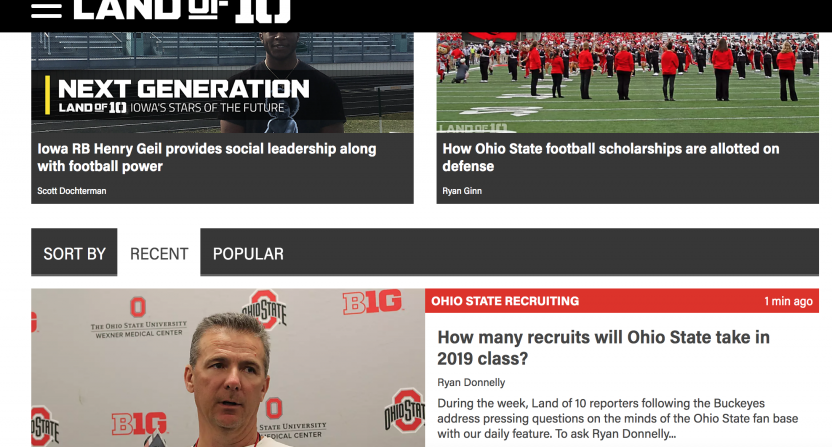 Cox Media Group will shut down its sports verticals June 30 and lay off many of the sites’ staffers, according to numerous people at the company who tweeted about the news Wednesday.

The cuts affect Cox’s Big Ten site “Land of 10,” its SEC site “SEC Country” and its general college-sports site “DieHards.” Cox had already shuttered its NFL vertical, “All 22,” at the end of last year.

Below is the email received by staffers, sent by CMG president Kim Guthrie.

Team, I wanted to provide an update on the status of our Diehards Vertical business. As you know, we recently announced that Diehards, which is made up of Dawg Nation, SEC Country and Land of 10, would continue to operate. However, the digital landscape and business dynamics around Diehards continue to be extremely challenging and the short, high-traffic seasonality of this sports vertical creates a difficult environment in which to build a consistent and sustainable revenue model.

As a result, we have reevaluated the future of Diehards within CMG and made the strategic decision to close all but one of the sites within the Diehards vertical by June 30th. This includes SEC Country and Land of 10. Dawg Nation will remain operational and the goal is to ultimately re-align this property into CMG Atlanta. Specifics around site management and leadership will be announced at a later date.

Closing Diehards was another difficult decision we’ve had to make, but it is the right move for CMG, given the current digital advertising environment. A definitive move away from the verticals business will allow us to fully focus our time, talent and resources on further strengthening and integrating our core businesses and local markets.

Change is never easy, but please know that we are being thoughtful in this process and making the right decisions today for CMG to remain competitive and profitable in the future. Thank you for your contributions and leadership, as always.

We’re told the news came as a big surprise, as Guthrie had communicated during a recent town-hall meeting that Cox and its investors cared about the college football sites and were planning on investing in them further. This town hall meeting came on the heels of Cox announcing its intention to shutter or sell Mundo Hispanico and Southern Kitchen, which was announced only a month ago. In between that meeting and today, things obviously changed, and the abrupt 180 from Guthrie certainly caught many involved with the sites by surprise.

Moments ago we learned Cox Media is closing @landof10 @SECcountry and @DieHards on June 30.

Truly believe the reporters/editors impacted are among the elite in this industry.

On a personal note, I am SO FREAKING PROUD of my efforts here at Penn State.#YouShouldHireMe!

I have some personal news to share: Land of 10 is shutting down June 30. I'm proud of all the work we did and especially the growth we showed the last two years. I met fantastic people and made new friends. Thank you for following and reading! Now it's time to find a new job.

Hello, as you may have seen, some very talented people (and also me) are losing their jobs as Land of 10, DieHards and SEC Country will be closing as of June 30.

The kid has been released from his LOI. DMs are open for business.

SEC Country gave me the chance to cover a major college beat insanely early in my career. I had a ton of fun helping build a unique brand of Auburn coverage with @LShute13 and @benjaminwolk.

We just found out the company is shutting down at the end of June.

I’m so, so proud of the work we’ve done and what we’ve built at SEC Country. And so it is with total devastation (and shock) that I tell you we’ve just learned that Cox Media will shut down business, effective June 30. So, hey, thank you for reading and I need a job.

I'm very proud of the work at Land of 10 alongside @BobbyLaGesse plus @RLenziCMG @rmginn @CincyGoGo plus many others the last 2 years. Unfortunately, Cox Media has decided to close Land of 10 and SEC Country by June 30. Thank you all for our support the last 21 months.

From the outside, Cox’s decision to shut down Land of 10, SEC Country and DieHards comes as a shock given the sites’ apparent growth over recent years. Cox had assembled an impressive collection of college sports writers, maintaining thorough coverage of the nation’s top programs, in football especially.

Christopher Smith, who oversaw strategy for Cox’s sports verticals, said on Twitter that the sites “showed incredible revenue growth, audience growth and future potential” and that “none of this was a reaction to lack of success.”

Cox Media Group has decided to shut down all the sports verticals, which means I'm unemployed.

Read into this what you will, but we showed incredible revenue growth, audience growth and future potential. None of this was a reaction to a lack of success.

The Cox Media Group sports verticals grew traffic 36.9% in 2018 compared to 2017. We were rocking it. Even our Facebook traffic was up. There are some real stars available, if you have jobs.

We can only speculate on what caused Cox to abandon a project in which it had seemed to invest substantial resources. Could those in charge have feared The Athletic’s encroachment into the college sports space? Did Cox simply decide it had better use for the money it was spending on football coverage?

For now, we don’t know. But we do know that a lot of talented reporters and editors are about to lose their jobs, and that always sucks for everyone in sports media.