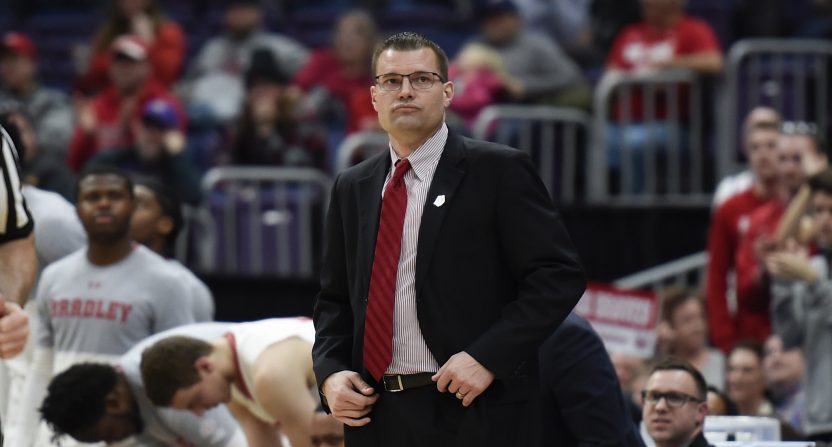 Following their 57-54 win over Northern Iowa last Sunday in the final of Missouri Valley Conference, the Bradley Braves will hear their name called on Selection Sunday, likely as a 15 or 16 seed. But some of the goodwill Bradley was likely to receive as an underdog could disappear leading into the Tournament thanks to an article posted late Friday night by the Peoria Journal-Star, alleging that Bradley limited the access of its primary beat writer for the school because he “doesn’t promote the Bradley brand.”

The beat writer in question is Dave Reynolds, who has covered the Bradley program for 29 years and is a three-time winner of the Illinois Sportswriter of the Year award.

Bradley admitted to cutting Reynolds’ access over the course of this season, and that his “level of access has remained consistent for the last several weeks.”

“During the 2018-19 season, the amount of access granted to Peoria Journal Star reporter Dave Reynolds was reduced. At the time his access to the Bradley Basketball program was limited, we discussed the issues that led to the policy change with Peoria Journal Star Sports Editor Wes Huett and the level of access has remained consistent for the last several weeks. Our focus is on preparing for the NCAA Men’s Basketball Championship.”

The issues between Bradley and Reynolds reached a head on Friday afternoon, when Reynolds was allegedly banned from participating in a Bradley media day event.

Here’s a lengthy account of what happened at the media day from Reynolds, who claims that he was told that he doesn’t “promote the Bradley brand” and “we don’t want you here” by Bradley assistant director of athletic communications Jason Veniskey, a stance apparently backed by Bradley head coach Brian Wardle.

“The door was open,” our man Reynolds said. “I walked in and chatted with the other media guys. (BU assistant director of athletic communications) Jason Veniskey was there but didn’t say anything to me. Players started to filter out. One of the players I wanted to talk with was Nate Kennell, and I motioned to Jason, ‘I’d like to talk to Nate.’ He said, ‘I want to talk to you for a minute.’

“He pulled me aside and said their policy of me not given extra coverage opportunity was still in place, and I was not allowed to do any interviews. I told him, ‘The newspaper received the invitation.’ He said, ‘That was directed to (Huett), not to you.’ I said, ‘He doesn’t cover the team. I have for 29 years.’

Said Reynolds: “He said I’m always looking for the negative and he’s been having this conversation (about it) with me,” Reynolds said. “He’s had it three times and nothing has changed. He said something to the effect of ‘We don’t want you around anymore.’

The university limited their comment to the above tweet, with school president Gary Roberts declining comment and athletics director Chris Reynolds (also a member of the NCAA Selection Committee) remaining silent.

Dave Reynolds (no relation to Chris) claims that head coach Wardle said he was “always looking for the negative” with Bradley basketball.

Said Reynolds: “He said I’m always looking for the negative and he’s been having this conversation (about it) with me,” Reynolds said. “He’s had it three times and nothing has changed. He said something to the effect of ‘We don’t want you around anymore.’

Chris Vannini of The Athletic made a couple of fair points on Saturday morning – many smaller schools across the country don’t even have a beat writer covering them on a regular basis, and trying to control that limited local coverage often ends poorly for them.

Because of cuts to local newspapers, a lot of small-college teams don't even have local media. Bradley should be grateful for having someone who covers them.

Journal-Star sports editor Wes Huett relayed a conversation he had with Veniskey on Friday following Reynolds’ departure from the media day event, where the communications director claimed Reynolds’ coverage of the team was laden with “half-truths and misleading stories.”

Huett received a call from Veniskey on Friday afternoon, after the incident.

“He said our coverage included “half-truths and misleading stories” and that we had been “unfair to the program,” Huett said. “He says a policy is in place (at Bradley) to keep Dave Reynolds from having “an extra access point” like today’s media gathering.”

I talked to colleagues in local TV media Friday. They declined comment. But yeah, they were stunned at this garbage.

Huett also recalled the meeting on January 29th, where Bradley again complained about Reynolds’ coverage not benefiting the school.

“They basically just laid out a litany of perceived slights Dave has done,” Huett said. “In some cases, they were over a year old.”

“One of their lines to me was that it doesn’t benefit them. I said, ‘I don’t care.’ I chuckled a few times during the meeting. It was very silly. Jason was shaking the whole time he was talking to me. I don’t know if he was scared or nervous or what. Bobby Parker (Associate AD for Communications and Event & Facility Operations) didn’t say much.

If you’re Bradley, what the hell are you actually expecting here? In five years at Green Bay, Wardle never made the NCAA Tournament, won zero games in either the CIT or NIT, and won one Horizon League title. In four seasons at Bradley, he’s never finished above .500 in conference play or above fifth place in the conference. They won Arch Madness by prevailing by a total of eight points in their three tournament games, and any of those three could have gone a different direction. As for Bradley, 2019 will mark their first NCAA Tournament since 2006. There isn’t some sort of recent history of positive results surrounding the school’s basketball program, so why would Bradley feel entitled to positive coverage?

This isn’t to suggest that if Bradley had been more successful in recent years, they would have been in their right to restrict access, but I’m just attempting to find logic in Bradley’s thinking. I think the school is incredibly naive if they believed A. this story wouldn’t have been made been public (especially after the media day incident) and B. that they would come out of this looking good and would be widely supported.

UPDATE: Bradley has issued a statement saying Reynolds will have his usual access after all.